The “American Dream” theme in The Great Gatsby

Please explain the use of the “American Dream” theme within The Great Gatsby and how it either supports or critiques the idea.

2-3 paragraph minimum, with or without textual support.

The foremost example of the theme of "The American Dream" in The Great Gatsby comes in the person of Jay Gatsby himself. We see that he sets a goal for himself early in life to attain wealth and power, and he follows through in his endeavor with hard work... But he chases "The American Dream" through crime and deception... But he is generally a good person ("You're worth the lot of them," Nick says [although we may not want to trust his opinion of character...]). See where this is going? Thus, we can consider the question of ends versus means. Is achieving "The American Dream" worth cheating for? Stealing? Killing? Gatsby is shown to be a bootlegger and a liar about his past (c.f. the scene where Gatsby drives Nick into town in his car, or Fitzgerald's original title for the novel: Trimalchio); however, Gatsby is not shown participating in any serious crime outside of bootlegging, which is a morally permissible crime for many during the Prohibition Era due to widespread disagreement with and disregard for the Eighteenth Amendment (c.f. speakeasies, Twenty-First Amendment, etc). Meanwhile, Tom illustrates the goal to which Gatsby aspires: he is wealthy, well-regarded, and powerful. However, Tom is also generally a bad person (examples abound throughout the book of his misogyny/womanizing, racism and classism, and ignorance). He cheats on his wife, manipulates his mechanic, and frames Gatsby for murder. Some would thus argue that Fitzgerald is showing us two sides of the same coin in order to bring the question of morality into greater relief: does Tom deserve the good things he has, or should bad things happen to him? What about Gatsby? Does the mythos of "The American Dream" contain a moral component that the reader is then left to question? You can take it from there, but I would encourage you to always consider the final scene that Fitzgerald gives the viewer of Tom and Daisy, sitting in silence and eating a cold chicken between the two of them like a pair of ravenous coyotes.

I hope this helps! For further assistance, please request a tutorial.

This seems suspiciously like a homework assignment but i'lm feeling generous so I'll give it a crack anyway.

Gatsby could be seen as having achieved 'the American Dream' as he started with nothing and is now rich/influential enough to have a mansion on West Egg and throw ridiculously decadent parties. This doesn't make him happy though as the parties are just a means to try and attract the attention of his old flame - Daisy. In this sense he fails because he doesn't fit in the old money world of West Egg and Daisy rejects him for Tom - one of the most despicable characters in the book. 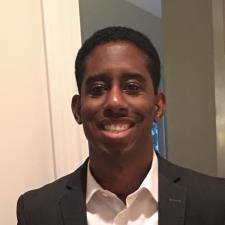