“She ran… , her nose pressed against the glass” Are the actions simultaneous or consecutive?

The sentence is saying she ran towards the display with her nose pressed against the glass, both actions happening simultaneously.

If she were to have run towards the display then press her nose against the glass there would either be a third action, making the comma into an indicator of a list of actions, or the writer would explicitly say she did one then the other. The comma is being used to separate an independant and dependant clause, both of which are taking place at the same time. This is a common way of adding imagery or context into writing so readers will have a more detailed story. 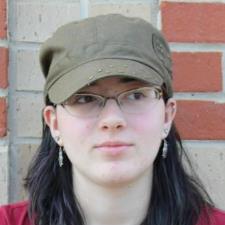