A student 6 feet tall stands a few feet in front of a 12 feet tall lamppost and starts to walk in a straight path away from the lamppost.

Please draw a picture of the situation:

- A horizontal line represents the ground.

Let B be the base of the lamppost, and L be its top.

- Let u(t) be the length of line segment BF, which is a function of time t

as the student walks away from the lamppost.

- Draw a horizontal line from H towards the lamppost.

Let D be the point where it strikes the lamppost.

The distance between D and H is also u(t).

- Draw the line LH connecting the points L and H and extending to the ground.

Let S be the intersection between the ground and the line LH.

The point S is the tip of his shadow.

It is the distance between the fixed lamppost and the tip of the student's shadow,

and it is also a function of time as the student walks away.

- Let α be the angle between the ground and the line LH (at the point S).

(It also happens to be a function of time, but it is not important here.)

- The angle between DH and LH is also α.

DL is the difference between the height of the lamppost and the student,

- That means that the student moves at half the speed of the tip of his shadow. 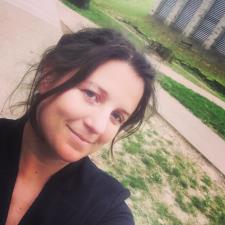 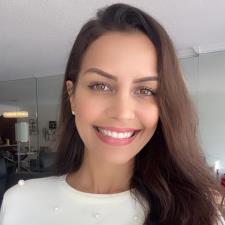