How can prose be musical?

Prof. Brooks Landon, U. Iowa, [Ph.D. U. Texas at Austin](https://english.uiowa.edu/people/brooks-landon). *Building Great Sentences: How to Write the Kinds of Sentences You Love to Read* (Great Courses) [(2013)](https://www.amazon.com/Building-Great-Sentences-Write-Courses/dp/0452298601). p. 142 > And here are two very different-sounding sentences from two of Thomas Berger’s novels. The first is from his classic *Little Big Man* and is in the inimitable voice of Jack Crabb: >>As I say, none of us understood the situation, but me and Caroline was considerably better off than the chief, because we only looked to him for our upkeep in the foreseeable future, whereas he at last decided we was demons and only waiting for dark to steal the wits from his head; and while riding along he muttered prayers and incantations to bring us bad medicine, but so ran his luck that he never saw any of the animal brothers that assisted his magic—such as Rattlesnake or Prairie Dog—but rather only Jackrabbit, who had a grudge against him of long standing because he once had kept a prairie fire off his camp by exhorting it to burn the hares’ home instead. > The second example is from Berger’s retelling of the “matter of Britain” in his *Arthur Rex* and sounds more than a bit like Sir Thomas Malory—but like a Malory who has just mastered the cumulative sentence: >>Now the abominable Sir Meliagrant took Guinevere to a kingdom that was not very distant from Britain but was cunningly concealed, tucked into a valley amongst mountains, entrance to which could be gained only by one pass not easily found, and before this pass was a rushing river over which was but one p. 143 >bridge, the narrowest in the world, for it was made of one long sword, the weapon of a giant, the which was mounted horizontally, keen edge upwards. > I’ve chosen these particular passages to share with you to suggest the range of prose rhythms we can hear in Woolf’s finely architected prose, Berger’s mastery of American vernacular prose rhythms, and Berger’s ability to invoke the sound of Sir Thomas Malory’s prose, but in a book whose prose is also thoroughgoingly modern. **Notice that these passages are rhythmical, but not musical or even metrical**—the result of the way each proceeds forward in steps rather than the result of syllable count or meter. As Ursula K. Le Guin reminds us in her delightful writing text, Steering the Craft, “The sound of language is where it all begins and what it all comes back to. The basic elements of language are physical; the noise words make and the rhythm of their relationships. This is just as true of written prose as it is of poetry.” What does Landon mean by ‘musical’? How can prose be 'musical'?
Follow • 1
Add comment
More
Report

Music in prose--like all kinds of music--is of course in the eye (or ear) of the beholder. So there is no simple, concrete answer to your question. The closest I, or perhaps anyone, can come to a technical answer is that most people would call prose musical when it incorporates some poetic elements (and often more specifically of light verse) without actually being metered poetry. But since these are all human conventions, the line between them is blurry. So when this prof says Berger's prose is rhythmical but not musical, he's not laying down a definition; he's just telling you what he thinks about it.

But surely, a better answer would be to give you some examples and see if they help you feel your way into it. LeGuin isn't a bad example herself, though I haven't read as much of her as I should have. Another one to look at is Edgar Allen Poe. Try any of his stories, but the first lines of "The Tell-Tale Heart" will do to start:

"True! --nervous --very, very dreadfully nervous I had been and am; but why will you say that I am mad? The disease had sharpened my senses --not destroyed --not dulled them. Above all was the sense of hearing acute. I heard all things in the heaven and in the earth. I heard many things in hell. How, then, am I mad? "

Or maybe an even better example is A. A. Milne--creator of Winnie the Pooh. Besides the actual light verse in the books, the narrative itself has, if not a melody, then at least a tone.

But again, just like Landon, I'm not telling you what's what; I'm just giving my opinion. 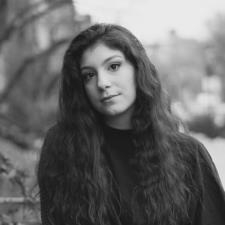