Work is a physical quantity that is defined in terms of a force causing a displacement of an object. For example, if a person pushes on a box, and that box moves some distance, the person has done work on the box. We can calculate exactly how much work was done by using the following formula:

where W is work, F is force, and d is displacement. The standard SI unit of work is the joule (J), which is equal to the work done by a one-newton force in moving an object one meter:

Let’s go back to the previous example. If the person pushes with a constant, ten-newton force, and the box moves a distance of five meters in the direction the person has pushed, then the person has done fifty joules of work on the box: 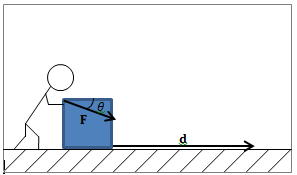 In this case, not all of the force contributes to moving the box. Only the horizontal component of the force vector, F cosΘ, is responsible for the work done on the box. We can incorporate that into our earlier equation for work, giving:

Now that the person is hunched over and exerting his force at an angle to the displacement, he is doing less work on the box:

(For those of you familiar with vector calculus, we can represent work as the dot product of the force vector F and the displacement vector d:

where F and d are the magnitudes of the force and displacement vectors, respectively, and Θ is the angle between the two vectors.)

The addition of cosΘ to our formula brings some interesting concepts to light: 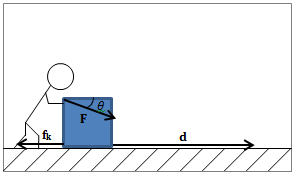 Let’s say the introduced kinetic friction force is a constant, nine-newton force. We already calculated the work done by the person as forty-seven joules. We can now calculate the work done by friction, realizing that the angle between the displacement and friction vectors is 180°:

Energy is another physical quantity, certain types of which are closely related to work. The first type we will discuss is kinetic energy, which is the energy an object has simply by being in motion. We can calculate an object’s kinetic energy with the following formula:

where K is kinetic energy, m is mass, and v is velocity. (You can use this equation to verify that the units of energy are the same as those of work: joules.)

In our previous example of the man pushing the box, let’s say the box weighs ten kilograms. We can do some calculations to determine what the box’s acceleration is based on the net force it experiences (0.0395 m/s²) and then some more calculations to find out what velocity the box has after it’s been pushed for five meters (0.629 m/s) to finally get us to the point where we can calculate the box’s final kinetic energy:

That’s a lot of calculations! Thankfully, there’s an easier way to calculate kinetic energy based on net work, and it’s called the work-energy principle:

(The f and i subscripts indicate final and initial, respectively.) And, if you remember from the previous example, the net work was calculated to be about two joules. Voilà! Moving forward from this point in your physics studies, you should find that you will use the work-energy principle as much as (if not more than) your previous battery of kinematics equations to calculate how fast an object is moving.

In general, the change in potential energy associated with a conservative force is the negative of the work done by that force. We can use this information to get formulas for our two types of potential energy:

• Gravitational: Imagine a box weighing five kilograms is lifted ten meters straight up. The work done by gravity in this case is:

and thus the change in potential energy is (positive) 490 joules.But what if we moved that same box along a twenty-meter path like so: 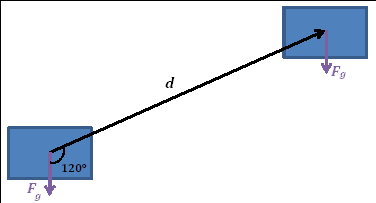 Now the work done by gravity is:

where Ug is gravitational potential energy, m is mass, g is the acceleration due to gravity, and h is the object's height above some reference point.

Sign up for free to access more Science resources like . Wyzant Resources features blogs, videos, lessons, and more about Science and over 250 other subjects. Stop struggling and start learning today with thousands of free resources!
<< Prev (Weightlessness)
Next (Physics Tutors) >>
SciencePhysicsWorkEnergy
Mark favorite