The concept of weightlessness is one that is easily misunderstood by most people until they have been exposed to introductory physics for the first time. For example, many of us learn early on (correctly) that weight depends on force of gravity Fg=mg, and that we weigh more on earth than on the moon because the strength of gravity on earth (g=9.8 m/s2) is greater than that of the moon (g=1.6 m/s2). It's no surprise, then, that one common misconception is that an object becomes weightless when the force of gravity becomes equal to zero. Strictly speaking, this statement would be true if not for the fact that the force of gravity can never be exactly equal to zero (see the lesson on gravitation for more details about the formula for the force of gravity). This is because gravity has an effect even over incredibly long distances, despite the fact that it is the weakest of the fundamental forces. So if the force of gravity is never equal to zero, how can anything be considered weightless? Simply put, weightlessness can be more accurately defined as “the feeling of not having any weight." This feeling is usually caused/enhanced by (a) the lack of a pushing or pulling force from nearby surfaces and/or (b) the perception that one's velocity relative to one's surroundings is equal to zero. Let's consider each situation one at a time.

The reason I feel my own weight when standing is because the ground is pushing upward on me. The more force I feel from the ground (or any other surface), the "heavier" I feel. This force that I feel from a contacting surface is commonly referred to as the normal force. In general, there is usually a force (like gravity) that pushes or pulls the body toward the surface. In response, the surface pushes back on the body in question. We can determine how hard this surface pushes by looking at the net force. Usually we sum up all forces acting on a body to determine the net force (Newton's 2nd law) using this equation

Consider the following scenario: you are inside a moving elevator and standing on a scale. The scale is used to measure how hard the bottom of the elevator is pushing against you. If the elevator is accelerating up (positive net acceleration), the net force on your body is pointing upwards, so Newton's 2nd law gives us the equation

Solving for N (which is the weight you feel) gives us

which is larger than your weight on the ground. If the elevator is accelerating down (negative net acceleration), we get the equation

Solving for N gives us

which is smaller than your weight on the ground. If anet=g, then N=0 and you will feel completely weightless.

If N=0 is sufficient for weightlessness, then why do people not normally consider themselves to be "feeling weightless" whenever they jump off a diving board (or skydiving for the more adventurous)? This is because I can sense that I am moving relative to my surroundings. If we return to the elevator example, I feel weightless in a falling elevator because I can "float" inside the elevator, which is simply because we are both falling at the same speed and have the same net acceleration. By the way, you may have noticed by now that the condition abody=aelevator=g must be met in order for N=0 be true, since the fact that both objects are falling together means they do not need to exert a normal force on each other. Both pushing and pulling forces and relative velocity are interrelated events that occur simultaneously to produce the feeling of weightlessness.

Therefore, we can refine our earlier statement about the relative velocity of the object to its surroundings in this way: the feeling of weightlessness is achieved when both the object and its surroundings experience the same net acceleration. This concept clearly explains why astronauts in the International Space Station are weightless. Intuitively, many people may say that there is "no gravity in space" or that the strength of gravity in orbit is much smaller. In fact, the opposite is true. Without gravity, satellites would not be able to orbit around the earth and would simply move in straight line into space. The reason why astronauts feel weightless is because they are accelerating toward the earth at the same rate as the vehicle they are in.

1. An ant is sitting on a tennis ball that is thrown directly upwards into the air. Which of the following statements is true? 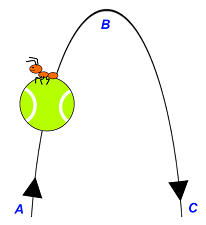 2. An ant is in a car of mass m that drives over a hill with a radius of curvature r at a constant velocity v. How fast must the car go in order to feel weightless at the top of the hill? 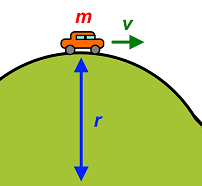 A. v=mg/r
B. v=√gr
C. v=mg/r2
D. v=√2gr
The answer is (B). If we draw a free-body diagram of the car at the top of the hill, the forces are the normal force (pointing upward) and the force of gravity. The sum of these two forces is equal to the net (centripetal) force, which is pointed downward. We know that the net force must be directed toward the center in order for the car to move in a circular path. Thus the equation we get is

Since the car is weightless (N=0) and the formula for centripetal acceleration is ac=v2/r,our equation can be rewritten as