When working with equations and mathematical operations with scalar quantities, you are looking at only the magnitude of the numbers. Therefore, when you solve a problem and find a numerical answer, you have the size of the answer but not its position. Using vectors instead of simple numbers can help you solve problems where you need more information. A vector is a number with a direction.

For example, say you are given the speed of an object (2 m/s) to use in a problem. Speed is a scalar quantity, so you only have the magnitude of the speed. If a problem gives you a speed and its direction (2 m/s west), you have velocity, which is a vector quantity and you can use this to find significantly more information.

It is usually easier to work with vectors in cartesian coordinates, because once we establish our coordinate system, we have a set i, j, and k that will be constant for any vectors we are working with. That means that any vector in the system will have an x,y, and z component (even if they are 0). To add vectors, you just add the x- components, y-components, and z-components. So to add our cartesian velocity from the last paragraph (2i+1j+3k m/s) to another velocity (3i+2j+1k m/s), we just add the components to get 5i+3j+4k m/s. The same process can be used to subtract one vector from another.

Vector equilibrium occurs when the sum of all vectors in a system is zero. When you have a system of two vectors, this is really easy. All you need are two vectors with the same magnitude and opposite directions. For example, the vectors 5i and -5i would be in equilibrium. It gets more complicated when you have more than two vectors. Let’s say you are given two vectors and you need to find the third vector that will put the system in equilibrium. The third vector is called the equilibrant. A good way to find this third vector is to figure out the sum of the first two vectors. This will give you essentially one vector, turning this problem into an easy two-vector problem. The equilibrant vector would be the same magnitude of the resultant vector in the opposite direction. The following is what this would look like if you drew it: 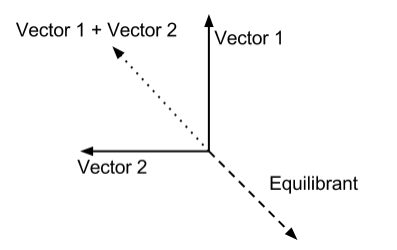 The same process can be used for systems with many vectors. Just add all of the vectors together, and the equilibrant will be the same magnitude in the opposite direction of the sum of the vectors.