Uniform circular motion (or UCM) in very basic terms is the next step most physics students take in describing how an object moves after learning about motion in one dimension. In UCM the radius of the circular motion is constant and if there is any change in the speed of rotation it is normally constant or uniform as well.

Students use nearly the same equations for circular motion as linear motion. The major stepping stones however for doing UCM is a) units and b) C = 2πr, a relationship that most students are familiar with but do not understand that it comes from a very powerful concept that normally they are not familiar.

Confusion usually starts with the concept of radians . Mathematics teaches us that radian measure is what we should use for angle measurement instead of revolutions or degrees. This is mostly true yet not always. However, when doing UCM problems the radian is the preferred measure and shortcuts are not worth the effort unless the student is very well versed in math. We use the conversion factor that,

The reason for the parenthesis around radians is that the unit is a dimensionless unit, it comes from the ratio of S: r ( arc length to radius ) or S = rθ, where θ is the radian angle measure or angular displacement. If the arc length is a full revolution then S = C (C is the circumference ). At this point it is good to point out that if C is in inches and r is in inches then 2π needs no units at all and that was what we were all taught years ago that C/r = 2π which was just a number. Now we know that S/r = a number θ which is just a number also with a label of (radians). 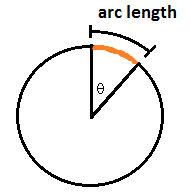 C = 2πr (or C = r(2π)) is really a basic math relation that almost all students learn in elementary school. It is however not explained as to why it works nor that the number gotten from C/r is really an angle measurement. To put it in more specific terms,

As always, length and time can be in any units ( however, most teachers seldom deviant from metric units ) but angular units should always be in terms of radians.

Because the basic equations used for linear motion are also the basis for UCM relations then rotational analogs appear very similar to the linear equations.

What is the angular displacement of a .23m radius bicycle wheel starting from rest and accelerating for 25 seconds at 6.3 (rad) / s2?

How far did the wheel travel in a straight line on the ground?

In summary, UCM is a first step from linear motion to rotational motion. It becomes easier to understand that centripetal force and acceleration are similar but quite different ways to explain some aspects of circular motion.The distinction is helpful to many students. Later torque and angular momentum are added so the entire rotational system becomes complete.

Sign up for free to access more Science resources like . Wyzant Resources features blogs, videos, lessons, and more about Science and over 250 other subjects. Stop struggling and start learning today with thousands of free resources!
<< Prev (Torque)
Next (Vectors) >>
SciencePhysicsMotion
Mark favorite