If you have ever been on a swing, you have acted like a pendulum. A pendulum can be loosely defined as something hanging that sways from one extreme to the other (oscillates). You have probably heard of grandfather clocks and oscillatory rides from amusement parks as other examples of pendulums. A metronome is right side up but can be described as a pendulum because it swings back and forth on a rigid rod. The seasons can also be described as oscillating from one extreme to the other. As you may see from many of these examples, pendulums are excellent timekeepers. 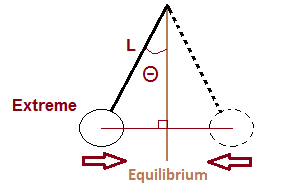 In the above graphic, L is the length of the string. Θ is how many degrees past the vertical the pendulum swings.

The equilibrium is the point where the pendulum would rest if it were not swinging. For a simple pendulum perpendicular this is always the middle, provided the pendulum is perpendicular to the surface of the earth. There are always two extreme points which are an equal distance from the equilibrium point. A simple pendulum will swing from one extreme point through the equilibrium position to the other extreme point. There, it will reverse direction, swing through the equilibrium point, and repeat the process. The maximum angle that a pendulum swings, or its most extreme position, is defined as its “amplitude (A).” The amount of time is takes to go from one extreme point to the other and back is defined at the “period (T).” The “frequency (f)” is defined by how many cycles the system goes through per second. Frequency is related to the reciprocal of the period, so you only need to know one of them. You may have heard these terms in waves or springs and it is not an accident that the same words are used. Pendulums, spring-mass systems, waves, and orbits have a lot it common.

Why does a pendulum oscillate?

In a completely idealized simple pendulum, there will be no energy losses and the pendulum will swing back and forth forever. For the case of the swing, we would have to take into account many real world issues including the center of mass of the system (why do you swing your legs forward and lean back?); however, for this discussion, we will only be concerned with simple pendulums, a ball hanging from a string. We will assume we are in a frictionless world, with massless strings that always remain taut, no air resistance, a perfectly uniform ball, and idealized in any other way we want for simplicity. Obviously, this cannot exist in the real world but it is beneficial to be able to account for the greatest effectors to get a ball park estimate for a real life problem. It also makes it easier to add in the smaller effects later.

What is the period of a pendulum?

Remember, the period of anything is the amount of time for one full revolution. The period (T), with SI units of seconds, of a simple pendulum oscillating at small angles (less than 20°) is:

As you can see, the period for a simple pendulum with a small oscillatory angle is only dependent on the length (L) of the pendulum and the local acceleration due to gravity (on the surface of Earth, g = 9.81 m/s). It is surprisingly independent of the mass on the string. It is also even more surprisingly independent of its amplitude. A pendulum oscillating at 5 degrees will have roughly the same period as one with 15 degrees if they have the same length and are on the same planet. This is what makes pendulums like grandfather clocks and metronomes such great time keeping devices. Even as real world effects like friction or air resistance suck energy out of the system, the period remains constant. Some clocks even compensate for this by increasing the length of the string as it loses energy. Because frequency (f) of a pendulum is equal to 2π/T:

What is the restoring force for a simple pendulum? 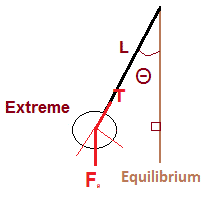 Through an energy balance or by applying the conservation of energy to a pendulum, we can relate the length of the pendulum to the tangential velocity through its max height at its amplitude. The height at any point can be found through trigonometry to be the length of the pendulum as measured at the equilibrium position minus the distance from the pivot point at its amplitude or

At the pendulum’s highest point, it has all potential energy and no kinetic energy since its velocity is zero. When passing through its equilibrium position, it has all kinetic energy and no gravitational potential energy since it is at its lowest point. We will measure change in height from this lowest point and so we can say:

The same mass is being multiplied on both sides so it will cancel out showing that the tangential velocity is independent of the mass of the object swinging. Solving for velocity yields:

We can use this information to solve to the change in height or tangential velocity at any point by doing a conservation of energy knowing that the system has some amount of potential and kinetic energy but it is always equal to the amount of energy at equilibrium and the extreme points, which are easily calculable. Again, mass will cancel out and will have no effect on the system.

Note that since the tangential velocity is not constant along the semicircular path, centripetal motion is not applicable for the entire path. However, you can set centripetal force equal to tension while it is going through the equilibrium position; some strings may break if the mass or the velocity of the ball is too big.

Motion of a pendulum:

The motion of a pendulum can be expressed as a function of displacement from the equilibrium postion (Θ) and time (t):

When you plug in 0 for time, you get a displacement angle of 0 because the pendulum is at the equilibrium position. When the function is equal to zero, it is at its equilibrium position. When the function equals its amplitude, it is at its extreme position, or amplitude. Because sin is a periodic function, it will cross zero an infinite amount of times and therefore the pendulum will cross the equilibrium position an infinite amount of times. The trick is to figure out how often it does this. Remember, sin(x) = 0 at integer multiples of π (0, π, 2π, 3π, etc.). The function will be at its most extreme point when sin(x) = 1 or -1. Negative displacements mean that the pendulum is on the opposite side that it started. These equations belong to a broader type of functions that we will discuss next.

What else experiences a restoring force?

The motion of a simple pendulum is an example of Simple Harmonic Motion (SHM). By definition, SHM is when something oscillates back and forth because it experiences a restoring force proportional to how far away it is from its equilibrium position. Spring-mass systems, pendulums, orbits in 2 dimensions, and many other systems can be described as undergoing simple harmonic motion. The general formula for anything that is oscillating under SHM is the equation of a wave:

You can also use a cosine version of this function by shifting the function π/2 to the right or by assuming the motion starts at its most extreme point.

For example, for a spring-mass system, the equation is identical to a pendulum and the general formula above except that the frequency is based on the mass (m) and spring constant (k). Also, amplitude for a spring mass system is measured in distance instead of an angle for pendulums.

The restorative force for a spring mass system is the spring force as derived from Hooke’s Law (F=-kx).

What happens to the period of a pendulum over time?

A. It decreases a lot
B. It increases a lot
C. It remains relatively constant
D. It has a half life of 3.14 seconds
The correct answer here would be C.

Where is the velocity of the pendulum equal to zero?

A. At its amplitude
B. At its equilibrium position
C. Never
D. At about 6.28 seconds
The correct answer here would be A.

What is not an example of simple harmonic motion?

A. A simple pendulum
B. A spring-mass system
C. A metronome
D. A bouncing basketball
The correct answer here would be D.

What is the period of the pendulum of a grandfather clock with a length of 3.0 meters at sea level on earth?

What is the length of a pendulum with period of 10 seconds on earth?

If Tarzan grabbed a taut vine 11.5 meters from the ground and swung down, how fast would he be going the moment before he reached the ground?

If a pendulum went through its equilibrium position at 10 m/s, how high would it go at its most extreme point?

What is the frequency of a pendulum with a length of 2.45 m?

Where would the above pendulum be at 8.72 seconds if its amplitude is 15 and it started at the equilibrium position?

Where would pendulum with twice the frequency as the one above be at 12 seconds if its amplitude is 8 and it started at the equilibrium position?

Sign up for free to access more Science resources like . Wyzant Resources features blogs, videos, lessons, and more about Science and over 250 other subjects. Stop struggling and start learning today with thousands of free resources!
<< Prev (Optics)
Next (Resonance) >>
SciencePhysicsForcesPendulums
Mark favorite