The unification of electricity and magnetism in the mid-1800s by James Clerk Maxwell was one of the major scientific achievements of the 19th century. This unification showed us that while electric and magnetic fields differ in some significant ways, they are also intimately related. Recall that fields are just constructs we use to understand these ideas: we can’t see fields, but we can experience their consequences by way of their forces acting upon other objects. In this article, we’ll learn about the magnetic field, magnetic forces, and the deep connection between magnetism and electricity.

The other main difference between these two types of fields is that while for electric fields our most basic field-generating object is the point charge, for magnetic fields it is the line of moving charges (think of a wire carrying some current). This is to say that there are no “point magnets”—or, as this important principle is often stated:

“There are no magnetic monopoles.” 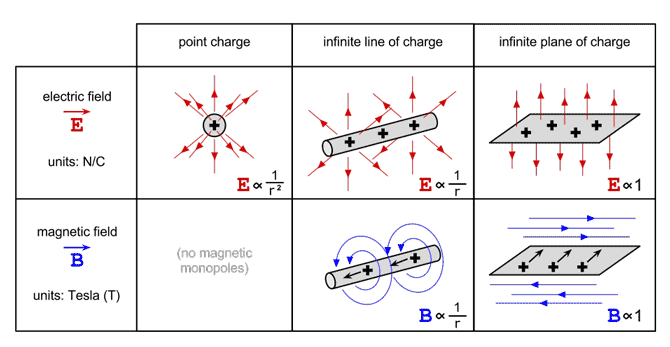 You may now be wondering, “hey, how did you figure out those magnetic field lines?” How magnetic fields lines are generated from moving charge sources is governed by the “right hand rule”. 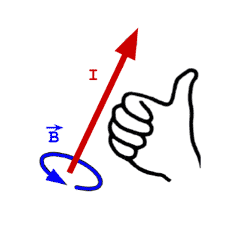 Much like electric fields, we experience magnetic fields by way of the forces they exert on charged particles. In contrast to electric fields, however, a charged particle must also be moving in order to experience a magnetic force. In fact the strength of the magnetic force (denoted by FB) is directly proportional to the speed of the charged particle. Compare the electric and magnetic forces in the following chart. Note the notation ʘ and ⊗, commonly used when dealing with magnetic fields and forces. These circles represent the directions straight out of the page and straight into the page, respectively. Think of them as showing which end of an arrow you’d see: either the pointed head coming out of the page, or the feathered tail heading into the page. 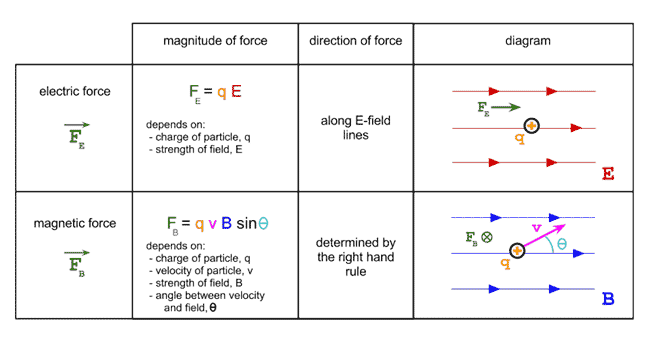 Here we see the right-hand rule again; it is also used, albeit in a slightly different fashion, in determining the direction of magnetic force. Whereas previously it was a one step process, here the right hand rule takes on two steps:

You can also check out a video of the right hand rule.

Note that this means the magnetic force is never in the same direction as the charged particle’s motion—in fact, it is always exactly perpendicular to it, thanks to the right hand rule. This means that the magnetic field never does any work, since work is defined as force along the path of a moving object. (See the article on work for a review of that topic.) Questions about work performed by the B-field are a favorite of teachers, so don’t be fooled! No matter the circumstances, the magnetic field can never do any work. This is in contrast to the electric field, which may indeed do work. Other common trick questions you may encounter regarding magnetic fields are with moving neutral particles (since they have no charge, they experience no magnetic force) or with stationary charged particles (since they are not moving, they also experience no magnetic force).

Note that in Figure 3, we have assumed a constant field value (E or B), such as that generated by an infinite plane. If you have a generating object that doesn’t generate a constant field, however, these equations can be extended by substituting in the appropriate r-dependent equations for E or B. We won’t get into that in this article, but know that you’ll encounter such problems in a full course on electricity and magnetism.

By now you’ve seen many of the important similarities and differences between the magnetic and electric fields. But you may not yet be convinced of the claim that there exists a “deep connection” between the two. If so, the phenomenon of magnetically-induced electric current will likely change your mind.

Say we have a loop of wire. There is no net charge on it, but the material is conducting, so charge is free to move, even though there is presently no current flowing on the wire. Suppose also that the loop is in a constant magnetic field pointing out of the page. 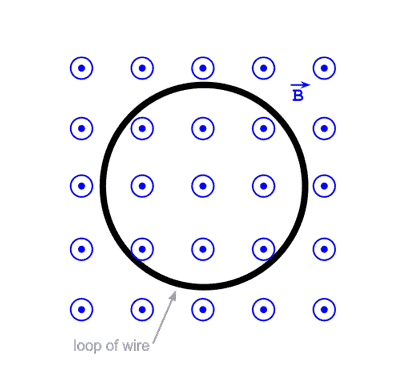 Suppose now that the strength of the magnetic field begins changing over time. An electric current will begin to flow in the loop! The amount of current that flows depends on exactly two factors: how fast the magnetic field is changing (e.g. 0.5 T/sec or -0.02T/sec), and the area circumscribed by the loop. In fact, it is handy to define something called “magnetic flux” (denoted by Φ), which can be thought of as the strength of a field through a loop times the area of the loop. (In truth, the flux also depends on the angle the field makes with the loop, but this is typically not covered until university-level courses. As long as the field is perpendicular to the loop, as in all the examples presented here, this third factor can be ignored when calculating flux.) The amount of induced current can then also be described as directly proportional to the change in magnetic flux. To summarize:

I ∝ ΔB · A (where ΔB is change in B and A is area of loop) can also be considered as:
I ∝ ΔΦ (where ΔΦ is change in magnetic flux)

Solving for the direction of the induced current is a bit more complicated, but can be described succinctly as follows:

“The induced current flows such as to oppose the change in flux.”

This means that if the field in our examples increases in strength, the change in flux will also point out of the page. Thus the current will flow such as to create a magnetic field pointing into the page inside the loop. (Recall: electric current generates magnetic fields—see Figure 1.) Whatever sort of field the current produces outside of the loop doesn’t matter—we are only concerned with what is happening inside the loop. 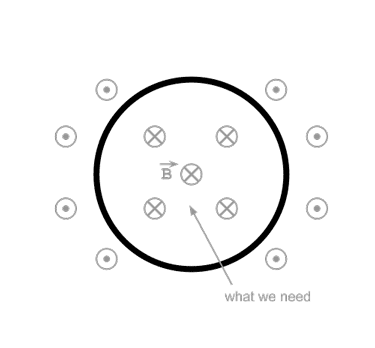 In what direction is the current flowing in our example, then? We must test guesses (either clockwise or counterclockwise around the loop) along segments of our loop using the right hand rule. Let’s try the top segment first. Practice your right hand rule skills by checking each diagram!

This would tell us that the current is flowing clockwise around the loop. Let’s try another segment of our loop just to make sure. We’ll check along the bottom segment also. Again, confirm these diagrams yourself by using the right hand rule.

Here again we see the current must flow clockwise in order for us to achieve the needed B-field as shown in Figure 6. We can then update Figure 6 to show the direction of current needed to create such a field: 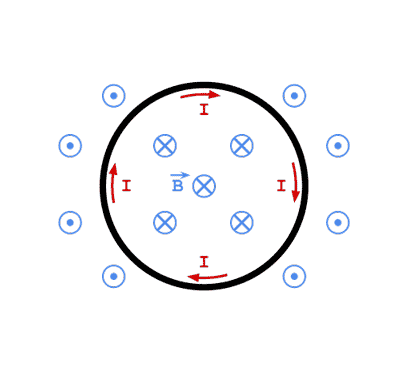 Now, consider again the original Figure 6. What if instead of increasing in strength, the B-field had decreased in strength over time? In this case, the change in flux, ΔΦ, would point into the page, even though the field itself would still be pointing out of the page at first. (Don’t let this opposing direction confuse you—you’ve likely seen a similar situation before, in mechanics. Consider a decelerating car moving eastward: even though the car is moving east, the deceleration means the change in velocity, Δv, points west.) Try figuring in which direction the current would flow along the loop in this case, by drawing diagrams similar to Figures 7 and 8. (Hint: it will now be flowing counterclockwise.) Spend some quality time with these pictures and ideas to really understand and become comfortable with them. Magnetism can be confusing at first and it will require some time to grow accustomed to the new ideas and calculations it presents.

What rule determines the direction of magnetic field lines?

A. left-hand rule
B. right-hand rule
C. left-foot rule
D. right-arm rule
The correct answer here would be B.

What are the direction of B-field lines along this current-carrying wire? (Assume current is heading directly out of the page.) 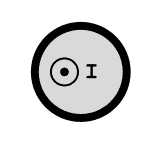 A. counterclockwise
B. clockwise
C. to the right
D. into the page
The correct answer here would be A.
Recall, current is the direction of moving positive charges. 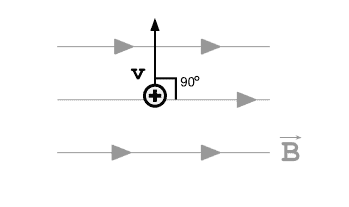 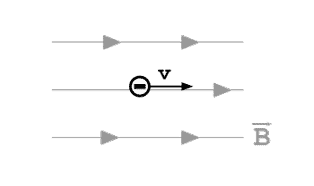 In the figure below, B is increasing with time. In what direction does current flow along the loop? 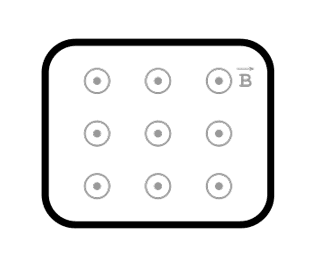 A. clockwise
B. counterclockwise
The correct answer here would be A.

In the figure below, B is decreasing with time. In what direction does current flow along the loop?

A. clockwise
B. counterclockwise
The correct answer here would be B.
Recall, even though B is out of the page, ΔB points into the page.
Sign up for free to access more Science resources like . Wyzant Resources features blogs, videos, lessons, and more about Science and over 250 other subjects. Stop struggling and start learning today with thousands of free resources!
<< Prev (Linear Momentum)
Next (Mass and Weight) >>
SciencePhysicsMagnetism
Mark favorite