The more familiar form of Newton’s second law of motion states that the sum of forces exerted on an object equal the product of the mass of the object and it’s acceleration,

However, this law is most generally written in the following form relating the net force on an object to the rate of change of the object’s momentum,

The term inside parentheses, the product of mass and velocity of the object, is called linear momentum or momentum for short and is denoted by letter p,

The most important property of momentum is it’s conservation. In any isolated system of objects, the sum of momenta of all the objects stays constant regardless of the forces acting between the objects. This is the famous principle of conservation of momentum, which is a consequence of Newton’s third law of motion.

Think of a collision between a car of mass m moving in the x direction and a truck of mass 3m moving in the opposite direction with half the speed of the car. The third law states that any action has an equal reaction in the opposite direction, which means at the instant of collision the car exerts the same amount of force on the truck (in the x direction) as the truck exerts on the car (in the -x direction) regardless of their different masses and velocities.

These forces are called impulsive forces because they act on an object during a brief period of time, the few seconds when the car and the truck are in physical contact. One can use this equation to write the force exerted on either of these objects as the rate of change of their momenta,

Substitution of these two equations into the previous equation gives 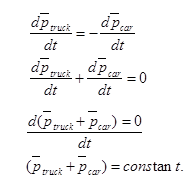 Therefore, in the isolated system of car plus truck, the sum of momentum of the two objects is constant and any momentum lost by the truck is gained by the car and vise versa. The change of momentum of an object is also called the impulse, denoted by letter J. Impulse can be calculated if the magnitude of the impulsive force and the time period of action are known. One can easily derive the following result:

Let us explore the usefulness of conservation of momentum with a few examples.

Assume John is running at a constant speed of 18km/hr on a horizontal road and sees a stationary skateboard and jumps on it. a) What is the velocity of the skateboard right after John jumps on it? John’s mass is 43kg and the skateboard’s mass is 3kg. b) How much energy is lost in this situation?

This is a one-dimensional problem. Let us label the direction that John is running toward as the x-direction. We can treat the jump as a collision and use momentum conservation to solve for the final velocity of the skateboard with John on it. The initial momentum of the situation is equal to initial momentum of John since the skateboard is stationary before the jump. The final momentum, which is the product of the combined mass and the final velocity, must equal the initial momentum. (We must be consistent with our units; thus before plugging numbers into equations, we need to convert John’s speed from 18km/hr to 5m/s.) 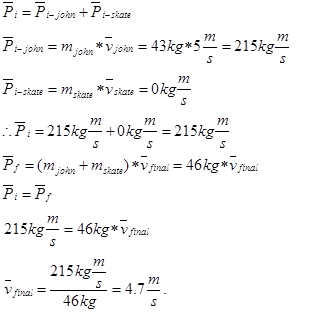 The final velocity of the skateboard after John jumps on it is 4.7m/s in the x direction.

This collision can be classified as a perfectly inelastic collision since the two objects move together after the collision. Therefore, kinetic energy is not conserved and 29.43 J is lost.

During a one-dimensional elastic collision, an object of mass m1 moving with velocity v1 collides with a stationary object of mass m2. Describe the motion of these two objects after the collision for each of the following three cases.

We have two unknowns for this problem, velocity of each object after the collision. Therefore, we need to have two different equations to find the two unknowns. We know that in our isolated system, momentum is conserved. We also know that kinetic energy is conserved since the collision is classified as an elastic collision. We can write two equations, using conservation of momentum and conservation of kinetic energy. (The velocities after the collision are represented by primed variables.)

We can substitute either of these final equations in the original equation for conservation of momentum and solve for each of the final velocities.

This is a two-dimensional problem. The equation of conservation of momentum should be stated for each direction or dimension.

The magnitude of the velocity vector is 6.3m/s and the direction is 18.4 degrees from the horizontal. 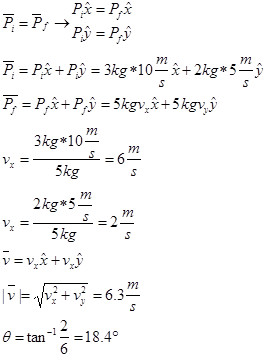 The magnitude of the velocity vector is 6.3m/s and the direction is 18.4 degrees from the horizontal.

A car traveling North from California to Washington at a constant speed of 25m/s, has a mass of 2000kg. What is the momentum of this car?

Which is the correct classification of a collision between frictionless billiard balls on a frictionless surface?

An object of mass m collides with another object, which has a mass of 400m. Which object experiences a greater momentum change?

A force that acts on an object in a limited time and changes the momentum of that object is called:

True or false: In a three dimensional collision between four objects, equation of conservation of momentum is truly three different equations each stating that momentum is conserved along a different direction.

A. True
B. False
The correct answer here would be A.
Sign up for free to access more Science resources like . Wyzant Resources features blogs, videos, lessons, and more about Science and over 250 other subjects. Stop struggling and start learning today with thousands of free resources!
<< Prev (Kinetic and Potential Energy)
Next (Magnetism) >>
SciencePhysicsMomentum
Mark favorite