Gravitation is a universal phenomenon that describes the tendency of physical bodies to attract, or move toward each other. The gravitational force is responsible for keeping the Moon in orbit about the Earth, holding together the billions of stars in our galaxy, and most importantly, keeping you attracted to the Earth, safe from floating off into space.

In 1687, Sir Isaac Newton published a three volume book called Principia in which he introduced mathematical laws for motion and gravitation. Within this book, Newton introduced his universal law of gravitation, which states that an object attracts any other object with a force that is inversely proportional to the square of the distances between them, with the magnitude of this force given by:

where G=6.673x10-11 m3/kg*s2 (or N*m2/kg2) is called the gravitational constant, m1 and m2 are the masses (in kg) of the two objects attracted to each other, and r is the distance (in m) between the centers of the two objects. Gravitational forces are vectors, denoted here by a bolded letter, such as F, and have a magnitude given by the above equation, as well as a direction.

Note that F12 is a negative value. This is because F12 is pointing in the negative x direction, while F32 is pointing in the positive x direction. Depending on the values of the masses, F2,net could be either positive or negative. If negative, F2,net is directed toward the left, and if positive, F2,net is directed toward the right. To calculate gravitational forces in more than one dimension, the force vectors must be broken up in to their x, y, and z components, then the principle of superposition can be applied.

Acceleration Due to Gravity

The acceleration caused by the gravitational force between the Earth and objects near the Earth’s surface is denoted as g = -9.81 m/s2. When the acceleration due to gravity g is written as a vector, it has a negative value because it is directed downward toward the center of the Earth. The magnitude of g for any planetary body can be calculated from first principles by starting with Newton’s Second Law, F=ma, and substituting the gravitational force for F: 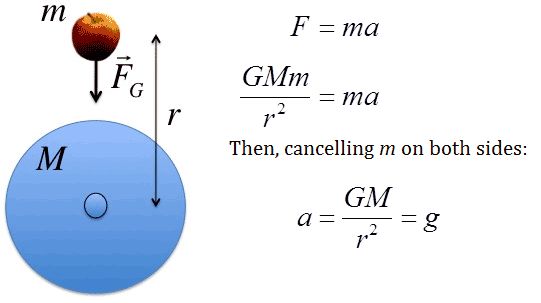 where M is the mass of the large planetary body, m is the mass of the smaller object, and r is the distance between the centers of the two objects. For objects very near the surface of the planetary body, we assume that the distance r is approximately the radius of the planetary body. This allows us to assume the magnitude of g is constant near the surface, even though the equation shows that g varies inversely with the square of r. The weight of any object can be calculated by multiplying its mass and g: Wg = mg. On smaller and less massive astronomical objects than the Earth, such as the Moon, the acceleration due to gravity is g ~ 1.6 m/s2. Although an object’s mass remains the same wherever it might be in the universe, its weight would be significantly less on the Moon than on the Earth.

The work required to arrange the three mass configurations is related to the change in gravitational potential energy of the system.

Suppose all three of the masses are initially infinitely far away. At infinity, r is very large, so the initial potential energy of the system is zero. Therefore, the work required to arrange the above configuration by bringing the masses in from infinity is:

This will give a positive value for work, since Uf is also negative. A negative value for work in this case indicates that work is being done against the attractive gravitational force. This would happen if we wanted calculate the work required to take the masses in Figure 4 out to infinity.

If a projectile is fired upward from a planetary body with a large enough speed, it can escape the gravitational pull of the planetary body, thus continuing off in to space. The minimum required speed of the projectile for this to occur can be calculated by considering the conservation of energy:

Assuming the final velocity of the object at infinity is zero, as well as the gravitational potential energy at a distance of infinity, we derive below the equation for the escape velocity of a projectile: 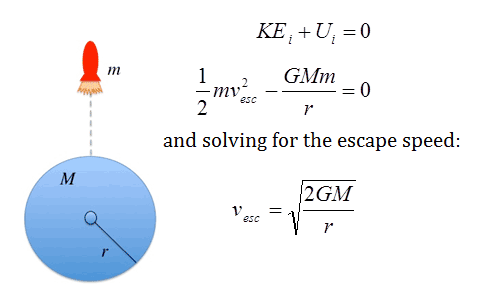 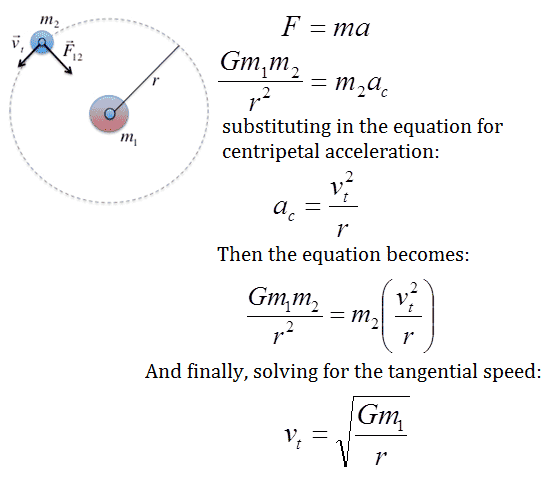 In fact, from this equation, we see that the mass of the orbiting object does not even need to be known. Additionally, the period of orbit can also be related to the distance between the two objects if we substitute the following equation in for vt:

Then the previous equation we derived for the tangential speed is now:

And solving for the period squared, we arrive at the following equation, which relates the square of the period (in seconds) to the cube of the distance between m1 and m2:

In the early 1600’s, Johannes Kepler published a series of three laws describing planetary motion. Nearly 80 years later, Newton recognized that Kepler’s Laws arise from his own laws of motion and the law of universal gravitation. Following is a summary of Kepler’s Three Laws as they pertain to our solar system:

1. All planets move in elliptical orbits, with the Sun at one focus of the ellipse. 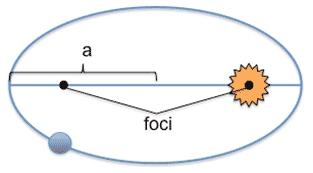 Note: The semi-major axis of the ellipse is denoted by a.

2. A line drawn from the Sun to any planet sweeps out equal areas in equal time intervals. 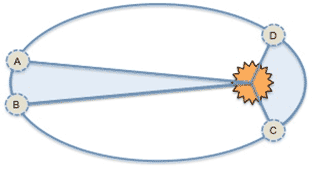 As a result, a planet will move slowly when it is farthest away from the Sun, and more rapidly when it is closest to the Sun.

3. The square of the orbital period (T) of any planet is proportional to the cube of the semi-major axis (a) of its orbit.

If we approximate the elliptical orbit as a circular orbit, and replace the semi-major axis a with r, this equation is the same as derived at the end of the previous section, where M is the mass of the body at one foci of the ellipse.

Note: Period (T) must be in seconds, semi-major axis (a) in meters, and mass (M) in kilograms.

No review of gravitation would be complete without mentioning Einstein and the curvature of spacetime. Thus far, we have discussed gravitation as being an attractive force between objects. However, Einstein introduced a whole new way of thinking about gravitation by positing that gravitation is due to a curvature of space created by objects with mass. Spacetime is a way of describing the universe as existing in four dimensions: three spatial dimensions (x,y,z) and one additional dimension devoted to time. 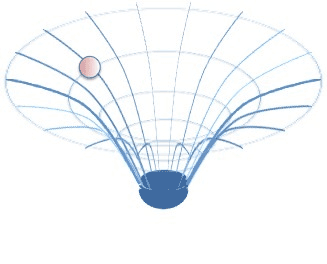 Calculate the acceleration due to gravity on the surface of Mars. The mass of Mars is 6.419x1023 kg, and the diameter of Mars is 6794 km.

Calculate the period of orbit and tangential speed (orbital speed) of Venus around the Sun, assuming that Venus orbits the Sun in a circle with a radius of 108.2x106 km. In fact, this is a very good assumption since the eccentricity of Venus’ orbit is only 0.007. The mass of the Sun is 1.989x1030 kg.

In Figure 8, between which two positions will the planet have the fastest orbital speed about the Sun:

Choose the FALSE statement below about Newton’s and Einstein’s view of gravitation:

A. While Einstein’s theory of gravitation is more accurate than Newton’s, Newton’s theory is much simpler, and a very good approximation in most situations.
B. Einstein attributes gravitation to the curvature of spacetime in the vicinity of massive objects, while Newton discusses gravitation as an attractive force between masses.
C. Newton’s law of universal gravitation can be applied to derive Kepler’s Third Law of planetary motion. Einstein’s view of gravitation can explain more complex phenomenon such as the bending of light near a massive object, know as gravitational lensing.
D. Although Einstein’s view of gravitation is more complex than Newton’s, they both agree that gravitation is a force between objects with mass.
The correct answer here would be D.
Sign up for free to access more physics resources like . Wyzant Resources features blogs, videos, lessons, and more about physics and over 250 other subjects. Stop struggling and start learning today with thousands of free resources!
<< Prev (Friction and Inclines)
Next (Heat and Energy ) >>
PhysicsGravityGravitationNewton
Mark favorite