Friction and Motion on Inclined Planes

Example 1: A block of mass m is on an incline that makes an angle, θ, with the horizontal. No friction acts on the block. Find

Solution:The forces acting on the block are gravity, FG, and the normal force, FN. Figure 1 illustrates the situation with a free body diagram for the block. Notice that dashed arrows have been used to resolve FG into two components FG,⊥ and FG,∥ which are perpendicular and parallel to the plane respectively. 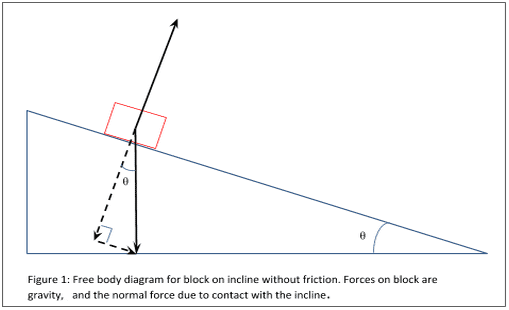 Since Fnet is along the plane all force components perpendicular to the plane must sum to zero. In this instance we have

Hence we are left with

Thus the magnitude of the net force, |Fnet| is just the magnitude|FG,∥|. Using trigonometry on the triangle with dashed sides we have|FG,∥|=mgsin θ.

Thus we conclude that |Fnet|=mgsin θ and that Fnet is directed down the plane.

2: To find the acceleration apply Newton’s Second Law in the direction of Fnet then

Notice that in this problem the normal force, FN, cancelled with FG,⊥ so that we never had to worry about calculating the magnitude of FN. This was convenient but there are inclined plane problems in which we must calculate |FN| before we can find |Fnet| and a. The best example of this is the case of a plane with friction.

Friction is a force that describes the tendency of objects in contact to resist relative motion. Thus, a friction force on an object is always directed opposite the direction of an object’s motion or intended motion. We’ll make the meaning of the term intended motion clearer in a moment. First, we need to distinguish between the two types of friction forces: kinetic friction and static friction.

Kinetic friction acts on an object which is sliding along another object. It is always directed opposite the direction of motion. When you send a text book sliding across a desk, the force of kinetic friction on the book is what brings the book to rest.

The magnitude of the kinetic friction force, ƒk, on an object is

The static friction force, ƒS, can be characterized as follows

An example should make both these properties clearer. Suppose I rest a book on a table top. Now I push lightly on the book in a direction parallel to the table top. If I push lightly enough the book doesn’t move. Thus the book’s acceleration is zero, and from Newton’s First (or Second) Law we know that the forces on the book must sum to zero. Hence, there must be some other force in the horizontal direction that is directed opposite my push and has exactly the correct magnitude to cancel my push’s effect. This force is the static friction force. The fact that it acts opposite to the direction in which the other forces would, collectively, accelerate the object explains the statement of property 1.

We can carry this example a bit further to illustrate property 2. Suppose I half the force of my push on the book. The static friction force must adjust its magnitude accordingly; otherwise there would be a net force in the horizontal direction opposite the direction of my push. The book would actually accelerate opposite the direction in which I apply force, which is absurd. Thus fs assumes whatever magnitude is necessary to prevent motion, up to the threshold ƒs,max=μS|FN|. This is what property 2 means.

The inequality in property 2 is algebraically awkward and in practice it’s usually best to use some logic to avoid having to introduce inequalities in our equations. We’ll demonstrate this below.

As a final note on friction, for any given pair of surfaces with static friction coefficient, μS, and kinetic friction coefficient, μk,it is true that μS = μS. A great way to understand this inequality is to observe that if we have a block at rest on an incline whose angle, relative to the horizontal, we increase slowly, then once the block slips it will never of its own accord come to rest again, even if we stop increasing the angle. This is precisely because μS = μS.

The Inclined Plane with Friction

Example 2: A wood block of mass m is initially at rest on a plastic plane inclined at 30° relative to the horizontal. The coefficient of static friction for this type of wood and plastic is μS=1/(2√3). Will the block remain at rest on the plane?

Solution: The forces acting on the block are gravity, FG, and the normal force, FN, and the force of static friction μS. Figure 2 illustrates the situation with a free body diagram for the block. As before, dashed arrows resolve FG into two components FG,⊥ and FG,∥ which are perpendicular and parallel to the plane, respectively. 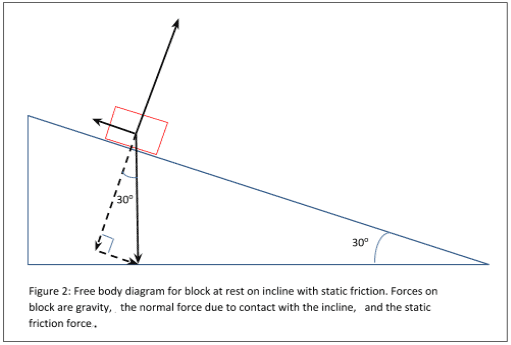 Since the block is initially at rest on the plane, to see if the block slides we must compare the magnitude of μS necessary to prevent sliding (make a=0) with the threshold value μS,max=μS|FN|

So assume a=0, then Newton’s Second law gives

Where the sine and cosine functions arise from the triangle with dashed sides in figure 2.

Now we must interpret these two results. The first equation gives the magnitude of μS necessary to balance the part of the force of gravity that is directed down the plane. If μS cannot attain the necessary magnitude, mg/2, the block will slip.

On the other hand, we can combine our knowledge of |F<><>| the formula for μS,max to get

Thus, μS,max=mg/4 is less than mg/2 , the magnitude of the static friction force needed to prevent sliding, so the block slides.

As a final example consider the following:

Example 3: Suppose the block from the last problem is set sliding on the plane and μK = 1/3√3. What is the block’s acceleration?

Solution: The situation is illustrated in Figure 3. 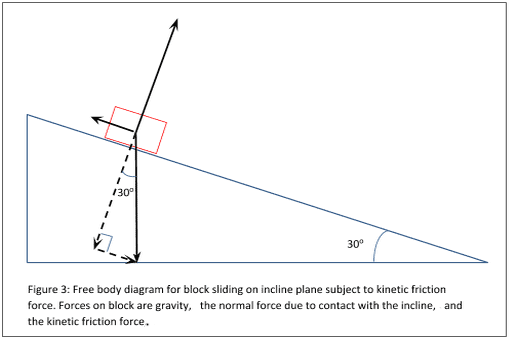 The block’s acceleration is found from Newton’s Second Law

Since a must be along the plane, all force components perpendicular to the plane sum to zero. In this instance

Since all the forces in this equation are now purely along the plane we can describe differences in direction with a sign convention. Suppose we call forces directed down the plane positive then the previous equation is equivalent to

1. A block is placed on a flat board which is dragged across the ground so that it accelerates at 3 m/s2. The block remains at rest relative to the board. What forces acts on the block in the horizontal direction

2. Suppose the block in the previous example has a mass 1 kg. What is the smallest possible value of the static friction coefficient μS governing the block/board interaction? (assume g=9.8 m/s2)


The answer is C. Since we seek the smallest possible value of μS assume that the static friction force attains its threshold so that |ƒs|=ƒs,max=μS|FN|. Since static friction is the only force on the block in the horizontal direction then Newton’s second law gives

3. Suppose the static friction coefficient between a horizontal plastic surface and a rectangular wood block resting on the surface is μS = 1/2 now a 2 kg metal brick is glued to the top of the wood block. Which of the following are true of the chance in μS and ƒs,max,the static friction threshold, between the initial and final situation?


The answer is B. μS is a characteristic of the wood/plastic interaction and remains unchanged. On the other hand, ƒs,max=μS|FN|. The normal force of the plastic surface on the wood block increases when the metal brick is added. Hence ƒs,max increases.

4. A uniform rectangular brick rests on a horizontal metal surface. A force is applied to the brick in the horizontal direction which is equal threshold of the static friction force. Now the brick is cut in half along a plane parallel to the metal sheet. The two halves are placed end to end on the sheet and the same force is applied to one end in such a way that the two halves are required to move as a unit. Which of the following is true?


The answer is C. The brick system will slide only if the applied force overcomes the threshold static friction value ƒs,max. We know that in the initial situation the applied force exactly balances ƒs,max. Since the applied force doesn’t change, we just need to determine how ƒs,max changes. Now, ƒs,max=μs|FN| and μs is constant. Furthermore |FN| is also constant since the metal surface must support the same weight although the weight has been distributed in a different way. Thus, ƒs,max is unchanged.
<< Prev (Electricity)
Next (Gravitation) >>
Mark favorite