Written by tutor William B. 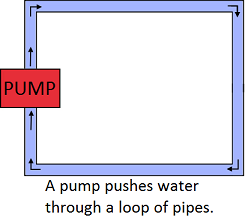 An electric circuit is a path where electrons flow from a source through assorted components and back to the source. It is analogous to a stream of water flowing in a loop. A pump (battery) supplies the driving force (voltage) which pushes the water (electrons) through a series of pipes (wires). These electrons can accomplish various forms of work as they move through the wire, from lighting a bulb, to spinning a motor. Three important concepts must be understood when approaching any circuit problem: voltage, current, and resistance.

Voltage can be thought of as the "driving force" to a circuit. Voltage "pushes" electrons to flow through the wires. The greater the voltage, the greater the push. Voltage is measured in volts (V) and is given the symbol V.

Current is the amount of charge that flows through an area per unit time. Think of it like the amount of water flowing through a pipe. A larger flow of water through a pipe means a greater current of water. Likewise, a greater current in a circuit means a greater flow of electricity. In addition, a larger voltage will also increase the flow of electricity; thus, voltage and current are directly proportional. Current is measured in amperes (amps) and is given the symbol I.

Resistance is a measure of a materials ability to impede (resist) the follow of electrons. Think of it like a buildup of deposit (gunk) in pipes that slows water down. The greater the resistance, the more the flow of electrons is impeded; thus, resistance and current are inversely proportional. Resistance is measured in ohms (Ω) and is given the symbol R.

Ohm's Law - Putting It All Together

Note that a simple algebraic rearrangement allows you to solve for the current if the resistance and voltage are known. Simply divide both sides by (R) to solve for (I).

A similar rearrangement is used to solve for the resistance.

A motor in a circuit has a current of 5 amps flowing through it and an internal resistance of 2 ohms. Calculate the voltage in the motor.

You are given the current (5 amps) and the resistance (2 ohms). Plug these values into Ohm's Law to solve for the voltage.

The voltage in the motor is 10 volts.

A light bulb is rated to run at 12 volts and has a current of 6 amps running through it. Calculate the internal resistance of the light bulb.

You are given the voltage (12 volts) and the current (6 amps). Rearrange Ohm's Law to solve for (R), then plug in these values to solve for the resistance.

<< Prev (Conservation of Energy)
Next (Friction and Inclines) >>
Mark favorite