This content is intended for the general physics without calculus. 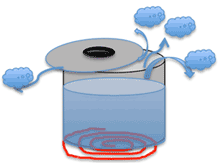 To solve problems with work and energy one needs to identify a system that one is working with.

A non-isolated system is a system in which the energy can cross its boundary; however, the total amount of energy in the universe is conserved. An example of a non-isolated system can be a pot (with or without a cover) on the stove with boiling water. As water boils, the water vapor escapes the pot (through the crevices of the cover if there’s cover present). The energy crosses the boundary (the top of the pot) of the non-isolated system. The change in system’s total energy is changed, but the amount of energy in the universe is conserved since the water was converted to water vapor and heat, not lost into oblivion. The energy is neither created or destroyed, just converted into other form of energy such as thermal energy, radiation, etc. The human is a non-conservative (non-isolated) system. Human interacts with the environment. Human eats to get chemical energy, which is then converted into mechanical energy to walk to work and do work. More on the non-isolated system can be found in calculus-based physics textbooks (e.g. Serway, Jewett, Physics for Scientists and Engineers with Modern Physics, Eighth edition, p. 199-234). 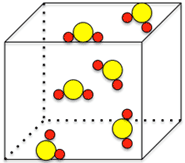 The total energy of an isolated system can be represented/imagined with or without boundaries. Some examples of an isolated system can range from a small box (like a vacuumed chamber containing gas particles bouncing off the walls of the container, in this case sulfur dioxide) to a classroom, college building, book-Earth system, state, country, solar system, and even the whole universe.

Why do you think the coffee stays hot for so long in the closed-lid container? Not much energy is lost to the surroundings or to friction on the walls as you lift up the cup and drink the coffee. So the energy/temperature of this isolated system stays constant for some period of time.

This brings us to:

The law of conservation of energy:
the total amount of energy of an isolated system is conserved/constant.

To differentiate whether you are dealing with an isolated or a non-isolated system, consider the forces acting on the system.

Conservative forces acting on the system such as the force due to gravity, Fg, or the spring force, Fs only depend on initial and final points of the object. Hence, a force is conservative if the work done by that force in moving an object is path-independent or if the work done by moving the object round –trip is equal to zero. Examples can include lifting up a can of soda and placing it back on the table. The work done is work opposing gravity and Force of gravity is the vertical force and is only dependent on height, independent of horizontal path. When you lift the can and place it back on the table the total work is zero since W1 = F*d, W2 = F*(-d).

A force is nonconservative if the work done by that force in moving an object is path-dependent. An example of a nonconcervative force is applied force, such as push, pull, and the force of friction, Ff. More work is done in moving a crate to the corner by going around the room as depicted below than just moving it across the room.

The energy transfer in/out of a system can be accomplished by work, mechanical waves, radiation, heat transfer, etc. For an isolated system, the sum of all potential (U) and all kinetic (K) energies is constant and equals to the total mechanical energy (E). Mathematically represented as:

The initial and final energies of an isolated system are the kinetic and potential energies:

Recall that potential energy of a spring depends on the position x, the spring either stretched or compressed from the equilibrium. Usually xi is taken as 0.

If we have more than 1 particle then the kinetic energies of all particles are added. Pay close attention to the subscripts. Differentiate initial and final states of the system for each particle.

The same is done with the potential energy if we have more than 1 particle:

Also, in a conservative system one form of energy is transferred into another and the sum of the changes is zero. Mathematically it is expressed as:

When we expand equation 10 more detailed we remember that any change is the difference between the final and initial states:

Let’s look at some examples.

Example 1: Thor stands on the top of the 92-story (423m) Stark building and fights Loki with his hammer. He is deceived by Loki and drops his hammer from the height of the building. Assuming the hammer is made from the star and its mass is 300 billion elephants, or 4.5 quadrillion pounds.

Solution:
a) Potential energy of the hammer = ?
1. Think about the problem. Do you need to do any further research or make any assumptions? Usually you don’t, but here you do. 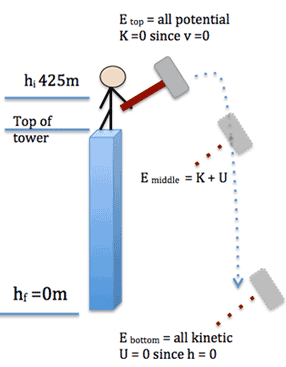 In this case do you assume that hammer falls from Thor’s hand or from the top of the building? Let’s say from his hand. Then you need to know how tall he is. Let’s assume that he is 2m tall. Then the total height the hammer falls is 425m.

2. Set up your problem. Write out all the givens and draw a picture.

4. Use the basic principles of conservation of energy. If we imagine our system with no friction present (no air resistance), then we have eq. 3:

Identifying equation 3 in terms of kinetic and potential energies we use equations 4, 5, 6.

Substituting the numbers, noting that initial velocity of the hammer in Thor’s hand is zero since it did not start falling yet, we have:

b) Ratio of energies = ?
Here, we have to look up conversion factor (using a reference book or search engine online) from calories to joules because the energy of the hammer is measured in joules and we can only make meaningful comparisons with the same units.

Therefore Thor’s hammer is that many times more powerful than the Oreo cookie.

To get the energy of a hammer we need to eat:

So, for part B of the example question, the answer is that Thor's hammer is 3.71 * 1016 times more powerful than the Oreo cookie.

c) K = ? 1/3 of the way down
While the hammer is falling, the energy is still conserved and the initial potential energy is converted into kinetic energy. So we use:

vf = ?
Before hammer hits the ground (h=0) all the potential energy (mgh) is converted into kinetic energy:

Therefore, the answer to part D of the example problem is that the final speed of the hammer is 52.73 m/s. 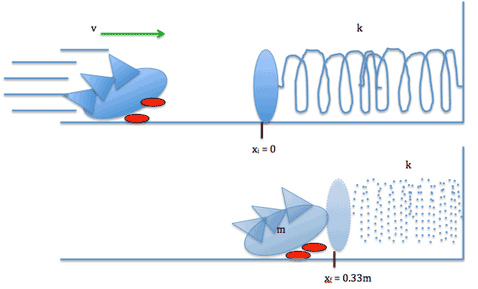 a) Esys = ?
Here, we are dealing with conservative forces again. We do not have friction because ice is slippery we assume that friction can be neglected. Therefore, we apply the principle of conservation of energy. Recall equation 7 for the potential energy of a spring. Initial position of the spring is x=0, so we only have kinetic energy right before Sonic runs into the spring.

By conservation of energy no energy is lost in the system when sonic collides with the spring (so our assumption is that no heat is given off during collision), therefore the obtained value is the total energy of the system.

Therefore, the final answer for part A of example problem 2 is that there are 18464.4 J in the system.

c) E(Sonic + Tails)
Expanding part a), we have to account for 2 masses within the system. We know already that potential energy when spring is in equilibrium is zero, so the energy of a system is the kinetic energy of 2 bodies. Here, we have to assume that Tails runs with the same speed as Sonic to catch up to him, so his speed is the same as Sonic’s speed. So we expect energy almost to double.

Therefore, the answer to part C of the example problem is that the total energy, if Sonic and Tails run into the spring together, is 33974.4 J.

Recall, from the work-energy theorem, that the net work done on the system is the work done by conservative and nonconservative forces:

where μk is the coefficient of kinetic friction and differs from surface to surface. It will be given in the problem. Also recall that work equals the component of force parallel the object’s motion times distance the object moves:

Let’s look at some examples with the non-conservative forces.

Example 3: Captain America slides down the hill in the winter sitting on his shield. Iron Man measures his speed at the bottom of the hill to be 10m/s. The hill is 50m high and Captain America weighs 90kg.

a) Is the system conservative or nonconservative? Explain.
b) How much work was done by friction? 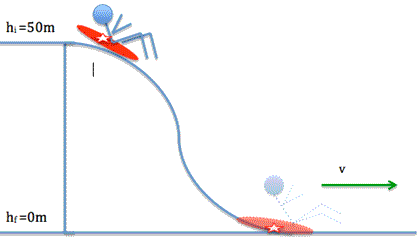 Therefore, the final answer for part A of example problem 3 is Ei ≠ Ef

Since initial and final energies are not equal the system is nonconservative.

Therefore, the final answer for part B of example problem 3 is that the work done by friction is -39600 J

Recall that the negative sign of work means it opposes the direction of motion, which is what we would expect from a frictional force.

Example 4: A 0.17 kg hockey puck slides on the ice with a speed of 85 mi/hr. Suddenly, it goes over a rough patch of ice 70 cm in length and then back onto the smooth frictionless surface. 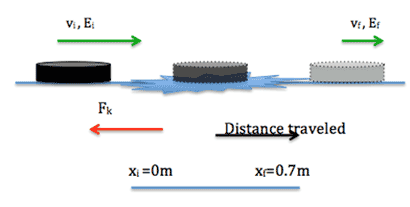 The work due to friction is the nonconservative work. So the left hand side of the equation becomes:

since force of kinetic friction and distance traveled are 180 degrees apart.
From eq. 14, we sub in for force of friction

Recalling that the normal force N is the opposite of gravity, or weight, mg, we rewrite

Now we plug in this result instead of nonconservative work in the first equation:

Solving for final velocity we divide by m, multiply by 2:

Note that the final velocity is independent of mass but dependent on coefficient of friction and initial velocity.

A child on a sled rides down from the top of the 20m hill. If his initial speed was 3m/s, how much speed did he gain by the time he got to the bottom of the hill?
Hint:
The gain of speed is the difference between initial and final speeds. 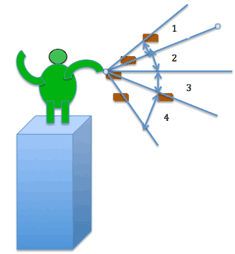 Hulk throws 5 rocks at the invading-Earth aliens from the top of the skyscraper. He throws 5 rocks at the same time with just 1 hand and they go different directions. Which rock will hurt the most (greatest velocity)? See diagram below for the directions of the rocks:
Angles 1, 2, 3, and 4 are 60, 45, 50, and 70 degrees respectively as measured from the horizontal. All the rocks are the same size. Neglect air resistance.
The gain of speed is the difference between initial and final speeds.

The Hulk is standing on the ground. He throws a 30kg rock at a 90degree angle (vertically upward). If the initial speed is 20m/s, what is the c) total mechanical energy?

A. 6000 J
B. 0 J
C. 147000 J
D. Not enough information.
The correct answer here would be A.
E = K + U = 6000 J
Sign up for free to access more Science resources like . Wyzant Resources features blogs, videos, lessons, and more about Science and over 250 other subjects. Stop struggling and start learning today with thousands of free resources!
<< Prev (Center of Mass)
Next (Electricity) >>
SciencePhysicsEnergy
Mark favorite