When calculating trajectories and collisions, it’s convenient to treat extended bodies, such as boxes and balls, as point masses. This allows us to use free-body diagrams for objects with different shapes and sizes while taking into account their masses and trajectories. We can treat objects, and even systems (Say galaxies in case of inter-galactic collisions), as point masses, even if they have very strange shapes or are rotating in complex ways. We can make this simplification because there is always a point in the object or system that has the same trajectory as the object or system as a whole would have if all its mass were concentrated in that point. That point is called the object’s or system’s center of mass.

Consider the trajectory of a diver jumping into the water. The diver’s trajectory can be broken down into the translational movement of his center of mass, and the rotation of the rest of his body about that center of mass. 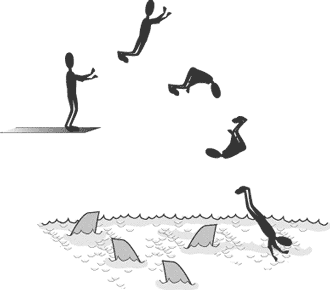 A human being’s center of mass is located somewhere around the pelvic area. We see here that, though the diver’s head and feet and arms can rotate and move gracefully in space, the center of mass in his pelvic area follows the inevitable parabolic trajectory of a body moving under the influence of gravity. If we wanted to represent the diver as a point mass, this is the point we would choose.

Our example suggests that Newton’s Second Law can be rewritten in terms of the motion of the center of mass:

Put in this form, the Second Law states that the net force acting on a system, Fnet, is equal to the product of the total mass of the system, M, and the acceleration of the center of mass, acm.

Note that if the net force acting on a system is zero, then the center of mass does not accelerate.

Similarly, the equation for linear momentum can be written in terms of the velocity of the center of mass:

Calculating the Center of Mass

For a System of Two Particles

For a collection of particles, the center of mass can be found as follows. Consider two particles of mass m1 and m2 separated by a distance d:

If you choose a coordinate system such that both particles fall on the x-axis, the center of mass of this system, xcm, is defined by:

For a System in One Dimension

We can generalize this definition of the center of mass for a system of n particles on a line. Let the positions of these particles be

To simplify our notation, let M be the total mass of all n particles in the system, meaning

Then, the center of mass is defined by:

For a System in Two Dimensions

Defining the center of mass for a two-dimensional system is just a matter of reducing each particle in the system to its x- and y-components. Consider a system of n particles in a random arrangement of x-coordinates x1, x2, ..., xn and y-coordinates y1, y2, ..., yn.

How Systems Will Be Tested

The formulas we give here for systems in one and two dimensions are general formulas to help you understand the principle by which the center of mass is determined. However, your understanding of center of mass may be tested in less mathematically rigorous ways.

For instance, you may be shown a system of two or three particles and asked explicitly to determine the center of mass for the system, either mathematically or graphically. Another example, which we treat below, is that of a system consisting of two parts, where one part moves relative to the other. In this cases, it is important to remember that the center of mass of the system as a whole doesn’t move.

If you’ve ever tried to walk from one end of a small boat to the other, you may have noticed that the boat moves backward as you move forward. That’s because there are no external forces acting on the system, so the system as a whole experiences no net force.

If we recall the equation:

Bearing this in mind, we can calculate the center of mass of the system containing the fisherman and the boat: 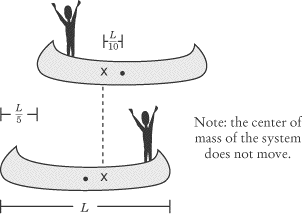 At the front end of the boat, the fisherman is now at position L, so the center of mass of the fisherman-boat system relative to the boat is

The center of mass of the system is now 3/5 from the back of the boat. But we know the center of mass hasn’t moved, which means the boat has moved backward a distance of 1/5 L, so that the point 3/5 L is now located where the point 2/5 L was before the fisherman began to move.

Sign up for free to access more Science resources like . Wyzant Resources features blogs, videos, lessons, and more about Science and over 250 other subjects. Stop struggling and start learning today with thousands of free resources!
<< Prev (Angular Momentum)
Next (Conservation of Energy) >>
SciencePhysicsMass
Mark favorite