The Basic Idea of Voltaic Cells

The core concept for a voltaic, or galvanic, cell is using chemical energy to do electrical work. More specifically, an oxidation-reduction (i.e. electron transfer) reaction is run, and the transferred electrons are forced through an electrical circuit. From this point forward, oxidation-reduction reactions will be referred to as redox reactions.

Usually, in a redox reaction the reactants are mixed together in a single reaction vessel. The reactants collide, one or more electrons are transferred, and products are formed. For example, a Zn atom reacts with a Cu2+ ion to produce a Zn2+ ion and a Cu atom.

In this case, the electrons are transferred directly between the reactants, and the chemical energy is converted to heat. In a voltaic cell, the reactants are separated into two solutions and connected by a wire. 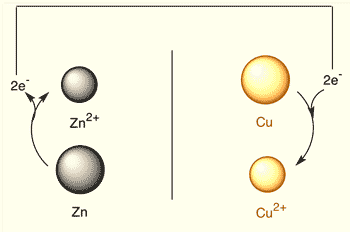 The reactants do not collide, which forces the electrons to be transferred indirectly through the wire, and the chemical energy can be converted into electrical work.

Nearly all voltaic cells have the same basic components: anode, cathode, salt bridge, wire, and two reaction vessels. The designs vary, but the basic idea is the same. 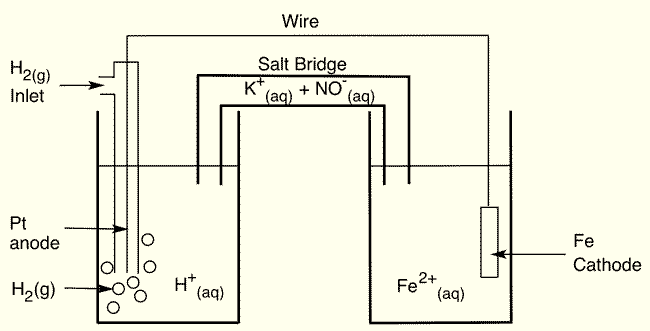 The reaction vessels, or half-cells, will each contain one of the half-reactions. In each vessel, both the reactants and products of the half-reaction will be present. Most commonly, this will mean a solid metal and an aqueous salt of that metal, like the cathodic half-cell in the figure shown above. The concentrations of reactants and products can be varied to tune the voltage of the voltaic cell (see below).

The electrodes, the anode and cathode, are electrical conductors. The half-reactions occur at the surface of both electrodes. By definition, the oxidation half-reaction occurs at the anode, and the reduction half-reaction occurs at the cathode. A useful mnemonic device is An Ox Red Cat (Anode Oxidation Reduction Cathode). Often times a reactant or product in the reaction is a solid metal. In which case, the reactant or product itself is an electrode. An example of this is the iron cathode in the figure above. When neither the reactant nor the product in the half-reaction is a solid conductor, the electrode is an inert, conducting material. Here, the half-reaction at the anode is H2(g) -> 2H+(aq) + 2e-. Hydrogen gas and protons are not solid conductors, and a strip of platinum metal is used as the anode. In this case, the hydrogen gas is bubbled through the solvent. Some of the gas dissolves, which allows it to reach the surface of the platinum anode.

where F is Faraday’s constant (F = 96,500 C/mol), and n is the number of electrons transferred. Thus, a more positive cell voltage corresponds to a more negative ΔG, and a more favorable forward reaction. A potential can also be related to equilibrium similarly to Gibbs free energy in the Nernst equation:

where Q is the reaction quotient, and E0 is the cell potential under standard conditions. Note: standard conditions are 1 atm partial pressures, and 1 M concentrations. Often, Faraday’s constant, at temperature of 298K, and the change of base formula are combined to yield the constant 0.0592 seen here:

Using a standard reduction potential table and the Nernst equation, it becomes possible to calculate the cell potential (and subsequently the ΔG) of reactions not under standard conditions. For example, calculating the cell voltage of a zinc/copper cell where [Zn2+] = 1.75 M, and [Cu2+] = 0.100 M. 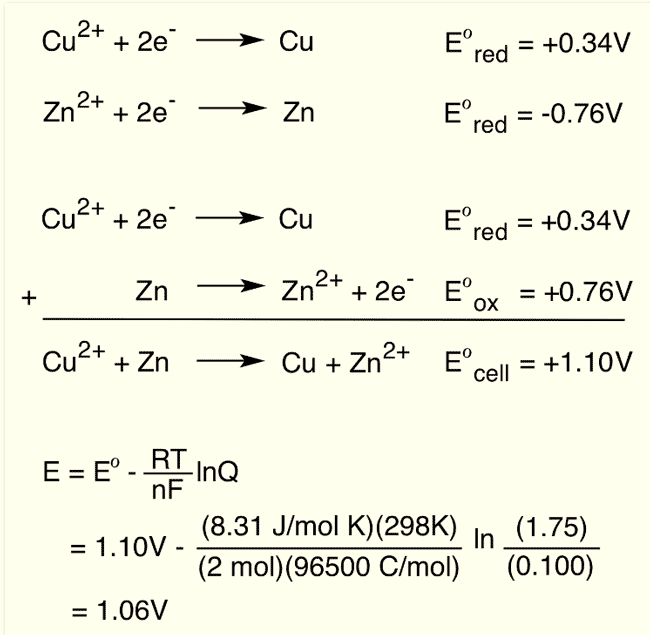 From the standard reduction potentials, the standard cell potential is found to be 1.10 V, and n = 2. Plugging the appropriate values into the Nernst equation yields a cell voltage of 1.06 V.

Sign up for free to access more chemistry resources like . Wyzant Resources features blogs, videos, lessons, and more about chemistry and over 250 other subjects. Stop struggling and start learning today with thousands of free resources!
<< Prev (Electrolysis)
Next (Radiation Chemistry) >>
ChemistryElectricityCationAnion
Mark favorite