This article assumes that the reader is reasonably familiar with the basic notions of structure, nomenclature and stereochemistry normally taught during the early stages of an Organic Chemistry course. In particular, the reader should be familiar with Organic Halides, as well as the concepts of Chirality, R,S-Configuration and Enantiomers.

Let’s first recall the definitions of Nucleophile and Electrophile:

Nucleophile: An electron-rich species. This will most often be an atom or molecule with 1 or more lone pairs of electrons that it can share (donate) to form a single bond. The Nucleophile can be neutral or negatively charged.

Examples of Nucleophiles are as follows:

*Note: Lone pairs are often left off of the symbols for nucleophiles, as above, but they are there. When drawing curved arrows for mechanisms, you have the option of marking a lone pair, if you wish, but it is not required.

Electrophile: An electron-deficient species that acts as a target for a Nucleophile. This will most often be a molecule with one of its carbons attached to a more electronegative element, with the result that the carbon is carrying a partial positive charge.

This partially positive carbon is called the Electrophilic Carbon. It is this carbon that is attacked by the Nucleophile. For this article, the only electrophiles discussed will be Alkyl Halides. 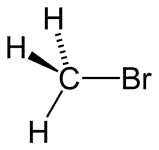 A- is the Nucleophile and Q is the Leaving Group in this Image. This is a general image, and says nothing yet about mechanism. The arrangement of R groups is entirely irrelevant at this point. It simply represents the Substitution of a Nucleophile for the Leaving Group.

* Note: SN2 happens in 1 step, whereas SN1 happens in 2 steps. The 1 and the 2 do NOT refer to the number of steps in the mechanism, and it is here that many students confuse these two reactions. The 1 and the 2 refer to the reactions’ kinetics. That is, SN2 depends on the concentration of both Nuc. and Elect., whereas SN1 depends only on Elect. alone.

In an SN2 reaction a Nucleophile attacks the electrophilic carbon of the electrophile. The bond between nucleophile and carbon forms at the exact same time that the bond between carbon and Leaving Group breaks. In other words, Nuc-C bond formation and C-Leaving Group bond breakage happen simultaneously. In the transition state, the carbon is partially attached to both. Let’s look at the reaction:

Note how the Nucleophile engages in “backside attack”. That is, it approaches from the side opposite the Leaving Group, not the same side as the leaving group. Also pay particular attention to how the SN2 mechanism inverts the configuration at the electrophilic carbon – much like the popping inversion of an umbrella when it opens too far, or when a strong wind blows against the inside and inverts it. If the electrophilic carbon happens to be chiral, an SN2 reaction will invert the original configuration. That is, if the electrophile was originally S, then the product will now be exclusively R, and vice versa. Let’s look at an example: 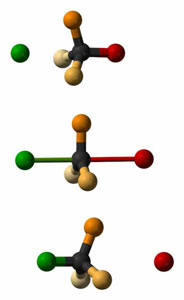 *Note: Assignments of R,S Configurations are based on the priority of the 4 groups attached to the chiral carbon. Most of the time the Nucleophile and the Leaving Group will have the same priority over the other groups. This will always result in Inversion of Configuration. Be aware, though that although the groups are always flipped in the SN2 mechanism, priority may cause the product to have the same R or S designation as the starting molecule. You will almost never see this.

For the SN2 reaction, Primary Alkyl Halides are more reactive than Secondary, which are, in turn, more reactive than Tertiary. Given the SN2 mechanism, it makes perfect sense that the greater the steric hindrance from larger groups as you go from primary to secondary to tertiary, the more difficult it becomes for the nucleophile to get close enough to the electrophilic carbon to react with it.

In an SN1 reaction, bond breakage and bond formation do NOT happen simultaneously. The leaving group departs first, taking the shared electron pair with it. This leaves a Carbocation, which is a species where the electrophilic carbon is completely deficient 2 electrons, so it carries a full +1 charge (Review the concept Formal Charge from General Chemistry, if necessary, if you are not sure why the charge is +1). At this point, the Nucleophile can attack this positive carbon center from either side, because the carbocation is a Triagonal Planar species. Therefore, if this carbon is Chiral, the product ends up being a Racemate (an equal mixture of Enantiomers), because Nucleophilic attack can happen at either face with equal probability. Of the two steps -- Leaving Group departure and Nucleophilic attack -- departure is the slow step, therefore the rate-limiting (rate-determining) step. This means that the concentration of Electrophile ALONE controls the rate of the reaction, hence the 1 in SN1. Let’s look at a few diagrams of this process:

Rates of Reactivity for SN1

The carbocations formed in SN1 reactions are susceptible to rearrangement. This means that Hydrogens or Methyl Groups might migrate to other parts of the carbocation in order to form a more stable carbocation. Examine the image below very carefully: