Written by tutor Adrian A.

Frequently the molecular weight of a compound is required to determine its identity or to elucidate its structure in the presence of other experimental data. Mass spectrometry is a technique that allows an experimental determination of molecular weight, by first ionizing a molecule of interest and then passing it through different electric and magnetic fields. How the ionized compound responds to known electric and magnetic fields correlates with its molecular weight in a well-characterized and quantifiable way. In this manner, the molecular weight of a new or unknown compound can be determined. A typical mass spectrometer consists of four main components: the sample inlet, some ionization source, a mass analyzer, and finally the ion detector. The ion detector is connected to a data-recording device, which often has software that contains a large library database of known molecular weights and their associated structures. As precision in this technique has improved over the years, it is possible now to consider more than just the parent peak of the molecular ion but also the isotopic distribution of that peak, which can provide additional useful clues when attempting to determine a structure. 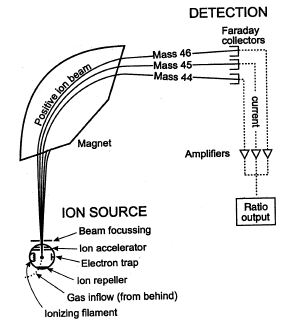 Figure 1: Components of the mass spectrometer. Although the ionization source may also be contained within the vacuum holding the mass analyzer, this is not always the case and therefore it is depicted outside the vacuum here.

Introduction of the Sample

Although the experimenter prepares their sample at atmospheric pressure, it must be introduced into the mass spectrometer’s intense vacuum without disturbing it. This is achieved by going through a device known as a vacuum interlock. If the sample is sufficiently small it will not disturb the vacuum, an observation that led researchers to try coupling chromatography (both liquid and gas methods) with mass spectrometry to great effect. Currently both Gas Chromatography Mass Spectrometry (GC-MS) and Liquid Chromatography Mass Spectrometry (LC/MS) allow separation of mixtures by retention time on a stationary phase prior to mass spec analysis, and both are workhorse techniques in the modern analytical laboratory.

In order to be eventually detected at the end of the mass spectrometer, it is essential that the molecules passing through the mass analyzer first be ionized. Several types of ionization are conceivable, including: protonation, electron ejection, cationization, or deprotonation. Basic functional groups of analyte molecules are particularly susceptible to protonation, and this ionization method is the basis of peptide analysis using the MALDI method (Matrix-Assisted Laser Desorption/Ionization). Acidic functional groups on the other hand are more easily deprotonated (see the content section on Bronsted-Lowry Acid/Base definitions), and therefore glycans, sugars, and sialic acids are subjected to this ionization method in mass spec analysis. In practice, a large amount of sodium Na+ ions are present in the laboratory environment, and because the non-covalent adduct of Na+ with a variety of otherwise neutral molecules readily forms, it is an excellent candidate for detection and quantitation. Observing a peak with a mass/charge ratio of 23 (the atomic mass of Na) units higher than the expected molecule is strong evidence that a Na+ adduct has formed. Finally, electron ejection occurs for low molecular weight, and somewhat nonpolar compounds that can tolerate the +1 positive charge associated with radical cations. The reader should look for conjugated double bonds in their system if they suspect this ionization technique might be active.

Mass analyzers measure the mass-to-charge ratio (written as “m/z”) of the gas phase ions produced by whatever ionization method was employed. It is important to always keep in mind that mass analyzers do not, and cannot, directly measure the mass of the gas ions – instead they measure the mass-to-charge ratio. Therefore if a particular ion has multiple charges, the m/z reading will be very low and will not correspond to the actual mass. If the number of charges is known however, then the mass can of course be backed out through calculation. While the first mass analyzers used magnetic fields and a curved trajectory to separate ions based on their m/z, more modern methods make use of EM radiofrequency fields to resolve differences in even very similar ions. On the cutting edge of sensitivity, and cost, Fourier Transform Ion Cyclotron Resonance MS (FTMS) analyzers allow resolution down to the isotopic level. Quadrupoles in contrast are relatively less sensitive but much lower cost, do not require such tight vacuum seals, and have an excellent broad mass range for analysis of biomolecules. Quadrupole mass analyzers are connected to a radiofrequency (RF) generator and a current. As the electrical field oscillates, the paths of ions passing through the rods of the quadrupole become stabilized or destabilized as a function of that electric field. Therefore by scanning the RF field rapidly, a mass-selective filter is produced and ions passing through at specific values of the field must correspond to a known m/z. In a Time of Flight mass analyzer (TOF), a group of ions are accelerated with the same amount of energy toward the detector, and the lighter ions hit the detector first because of their lighter mass compared to the heavier ions.

After separation of the ions by the mass analyzer according to their m/z, they impact the detector where they are translated into a current that is interpreted by the data-recording device. The most common detector is the electron multiplier, which amplifies the current in the mass spectrometer by between 100 and 1 million-fold. This is achieved by layering a series of hallow metal parts called dynodes that are designed to repeatedly produce secondary electrons. For particularly large molecules or particles, inductive detection, a method that relies on the charge of a passing particle to induce a current on the detector’s plate, can also be used, although this is less common than an electron multiplier.

Particularly sensitive mass spectrometers can be used to determine the isotope ratio of carbon sources and therefore can be used for carbon dating to determine the age of a sample. Mass spectrometry has important implications in the field of materials science, where it can be combined with field ion microscopy (FIM) to produce computer-generated reconstructions of metal alloy surfaces. GC-MS is used extensively in drug testing labs and in pharmacology studies. Peptide and protein chemistry have benefited enormously from advances in mass spectrometry, and the problem of protein characterization has in fact driven most of the improvements in this analytical technique. Lastly, mass spectrometers have been used to characterize the atmospheres of other planets, as numerous space craft in recent years have been outfitted with GC-MS instruments including missions to Mars and Saturn, and Saturn’s moons Titan and Enceladus. Improvements and innovations are ongoing in the field of mass spectrometry, with particular attention being paid to how to extract more information at the mass analyzer stage of the process.

Scripps Center for Metabolomics, What is Mass Spectrometry? http://masspec.scripps.edu/mshistory/whatisms_toc.php