Hess’s Law is probably one of the favorite parts of general chemistry, particularly in high school or first level undergraduate courses, when it is finally understood. In classroom practice, Hess’s Law becomes a game or puzzle that a student attempts to solve after being given a set of clues in which to answer a question. However, before delving into Hess’s Law, something should be said about state functions, energy, and then enthalpy.

Referring to the Merriam Webster dictionary [1], the definition of state is given as “a condition or stage in the physical being of something,” and of function is “a variable (as a quality, trait, or measurement) that depends on and varies with another.” Taking these together, a state function is a property or feature of an object which varies depending upon some other property of the object. This may seem like a rather mealy-mouth description for a function of state, but it is best understood by examining the total energy in a system and through the laws of thermodynamics.

Consider, perhaps, the most famous law of nature: conservation of energy. This is often applied in both chemistry and physics courses, particularly in thermodynamics for the former. The law is sometimes referred to as the first law of thermodynamics. It turns out that given a closed or isolated system, the total energy of that system is a function of state. We can see an example of this with mechanical potential energy.

Say our system consists of a floor, a table, and a book, with the book on the floor (you will not be apart of this system, only these objects). Now, when the book is just lying on the floor, it has some energy associated with it. Usually, we would say the book has 0 Joules of energy, defining the ground as having a height of 0 meters. Moving the book to the table top and leaving it resting on the table top gives the book some amount of potential energy (PE = mass*gravity*height). It does not matter if you take that book and run around the room with it, waving it above your head before setting it on the table, OR just lifting it straight up to the table. In the end, the book started on the floor and it ended on the table, what happened in between does not matter. Thus, the potential energy for the book is a state function.

This brings us to enthalpy (H). Enthalpy is another state function. It is often used in physics to define the amount of total energy that would be needed to sort of “poof” of object into existence. That is, H = U + PV, where U is the total internal energy of the object/system, P is the pressure, and V is the volume. From a physics viewpoint, H consists of the total internal energy that an object contains U and the work (PV) needed to create space for that object to exist. In terms of chemistry, enthalpy is often used to determine if a process is endothermic or exothermic. However, it also gives us a means of using Hess’s Law to determine how a series of reactions will take place. Hess’s Law will take advantage of the fact that enthalpy is a state function, so it does not matter if by starting at point A to get to point Z we go straight from A to Z or go from A to B to C to ... to Y to Z.

Let’s use an example in order to illustrate Hess’s Law and how to use the feature that enthalpy is a function of state. I will extract the “clues” for the problem from NIST. The question will be: What is the change in entropy for the reaction when oxygen is mixed with sulfur to create sulfur trioxide? Your clues are presented in the following table:

Sometimes you will get the clues as reactions as well. But we will actually build the reactions ourselves. I will tell you the answer up front, then show you how we could have obtained the answer in many ways, thanks to Hess’s Law. It is -1420.29 kJ/mol (exothermic reaction).

The first way we could have developed our equation was to write the balanced equation:

Since enthalpy is a state function, all that matters is the initial and final states. The initial state of the system is the reactants (3O + S). The final state is the products (SO3). Since we want to know the change in enthalpy, we always calculate a “change-in” by subtracting the initial from the final.

The problem has been solved (Note: notice that I multiplied by 3. Tables like the one above given the energy per mole usually, so you need to have a balanced equation first, and then make sure to multiply by the correct coefficient). However, Hess’s Law tells us that we can use any path to get to the final answer. What if instead we went the route below:

Working out the math for the first step gives:

And then the second step:

Hess’s Law has been used to show that it does not matter which path I take to get from the first equation to the last equation. I could have even taken a step back and first made O2(g) and proceeded from there, the total change in enthalpy would be the same. As a final example of the process, a figure is presented which shows various steps that could have led to the conclusion of the example reaction. Note: If you ever want to use an equation in the opposite direction, just switch the reaction and then change the sign of the enthalpy. For example, 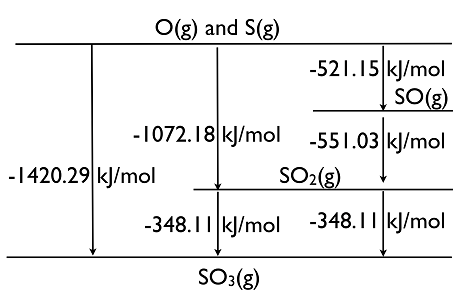