Electrons play a crucial role in chemical reactions and how compounds interact with each other. Remember, electrons are the negative particles in an atom that "orbit" the nucleus. Although we say they orbit the nucleus, we now know that they are actually in a random state of motion surrounding the nucleus rather than making circles around it, which is what an orbit implies. The best analogy to describe electron motion within an atom is how bees buzz around a beehive. They don't fly in complete circles around it, but they do hover and move around it in a seemingly random motion.

Electrons increase in elements as protons do, which is from left to right and from top to bottom on the periodic table. Therefore, the element with the fewest electrons would be in the top left-hand corner of the table and the element with the most electrons would be in the bottom right hand corner. The elements are arranged so that the increase from element to element is one electron. Therefore, in the first row, we see hydrogen and helium. This is because hydrogen has one electron and helium has two electrons, so we place them in ascending order.

We categorize electrons according to what orbital level in which they reside. The four orbitals are s, p, d, and f. They are classified by divisions on the periodic table, as follows:

The first orbital is the s orbital. It has room to hold two electrons. The electrons have opposite spins, so it makes sense that they are paired together. The s orbital is a sphere, with the x, y, and z axes passing through it, like this: 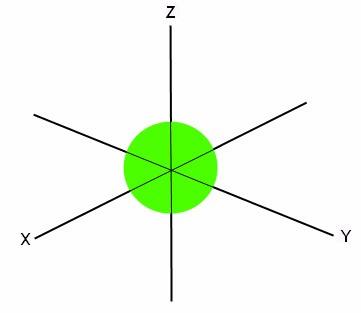 This means that the two electrons can occupy any of the space seen in this sphere, and they sort of "hover" around in the given space.

The next orbital is the p orbital. It can hold up to six electrons, therefore it has three sub-orbitals (each can hold two electrons). The spins on electrons are still opposite, this time split into three and three (since the first orbital only held two electrons, we said the spins were opposite. Now that this orbital can hold six electrons, three spin one way and three spin the opposite way). The p orbital is not sphere shaped, however it does have six lobes that are shaped like balloons. Two lobes are on the x axis, two are on the y axis, and two are on the z axis. These three separations are considered sub-orbitals and combine to make up the entire p orbital. The nucleus of the atom is located where these three axes meet. The p orbital looks like this:

The next orbital is the d orbital. It can hold up to 10 electrons, therefore it has five sub-orbitals (each can hold two electrons). The spins of the electrons are opposite, so five are spinning one way and the other five are spinning the opposite way. The d orbital is not sphere shaped; it looks more like the p orbital, except there are more lobes that cannot be shown all at once. We showed the entire p orbital (all three of the sub-orbitals) in one diagram, because there were two lobes on each axis. However, we need to show the five different sub-orbitals of the d orbital in order to fully explain where the lobes are located, and how they are shaped. We will show you four views, with labels on all of the axes.

The final orbital is the f orbital, and scientists are not completely sure of the shape of its orbital. However, they do have seemingly accurate predictions of where electrons will fall. We will show you the following probabilities of where electrons lie:

We showed you two probabilities of where the f orbitals lie; however, the first image (in blue) is shown on the Z axis. It is actually repeated on the X axis and again on the Y axis. The second image (in orange) is shown in the XYZ dimensions; however, it is repeated three more times for a total of four positions using this shape and lobe configuration. We say that these are probable locations because scientists cannot actually track and determine the exact location of electrons. However, through research and abilities to track electrons in other orbitals, scientists can say that the likely location of f-level electrons is in one of these locations.

In chemistry, the Diagonal Rule (also known as Madelung's Rule) is a guideline explaining the order in which electrons fill the orbital levels. The 1s2 orbital is always filled first, and it can contain 2 electrons. Then the 2s2 level is filled, which can also hold 2 electrons. After that, electrons begin to fill the 2p6 orbital, and so on. The diagonal rule provides a rule stating the exact order in which these orbitals are filled, and looks like this:

As you can see, the red arrows indicate the filling of orbital levels. Starting at the top, the first red arrow crosses the 1s2 orbital. If you follow these arrows down the list, you can easily determine the order that electrons fill the orbital levels.

There is an exception to this rule when filling the orbitals of heavier electrons. For example, when filling the 5s2 orbitals, the rule says that 5s2 will fill, and then 4d10 will fill. However, when filling these orbitals for certain metals, only one electron will fill the 5s2 orbital, and the next electron will jump into the 4d10 orbital. This can be predicted, but cannot be exactly determined until it is observed. The same is true for the 6s2 orbital-for certain heavy metals, the 6s2 will only contain one electron, and the other electrons will jump to the 5d10 orbital.

Following the diagonal rule, there is an easy way to write electron configuration. We are simply going to use the orbital names we learned from the diagonal rule (1s2, 2s2 and so on). However, we are only going to write the number of electrons that the atom actually contains. For example, hydrogen has one electron, which would fall in the 1s orbital. Thus, the electron configuration for hydrogen is 1s1. We write the superscript as 1 because there is one electron. Helium, the next element, contains two electrons. They both fill the 1s orbital, so the electron configuration for helium is 1s2. Here again, we write the superscript as 2 because there are two electrons.

Electron configuration moves across and down the periodic table. You might have noticed that we first put one electron in the 1s orbital (with hydrogen), and then we put two electrons in the 1s orbital (with helium). Continuing this trend, we would next have 3 electrons with lithium. We would place two of them in the 1s orbital, and one of them in the 2s orbital, so the electron configuration would be 1s2 2s1. However, we can also write this using the configuration of helium, because it is a noble gas. Noble gases are stable elements, so we can use their configurations in determining other configurations. So, instead of writing 1s2 2s1, we would write [He] 2s1. This means that lithium contains the same configuration as helium, and then has one more electron in the 2s orbital. Notice that we use brackets to encase the previous noble gas, and then we continue writing the configuration as we normally would. This might not seem like a big deal, or a shortcut right now, but once you get pretty far down the periodic table, this will save you a lot of time and energy.

We'll show you one short example of this. Let's say we need to determine the electron configuration for Ba, Barium. Counting across the table, we would come up with the following configuration:

Instead of writing all of this out, we could simply find the previous noble gas, which is Xe. Therefore, we can write [Xe] and then figure out the rest of the configuration. We look and see that Ba is in the 6th row, so we know that we're going to start with 6s2. We can look and see that Ba is the second element in that row, so it has two electrons to go in the 6s orbital.

Thus, we can conclude that the final electron configuration for Ba is [Xe] 6s2.

Every electron placed in an orbital has a feature we refer to as "spin." We've already talked about electrons having been thought to have a specific "orbit," and then later discovered to hover in the places listed above. Well, electrons don't literally spin, but their movement sort of looks like someone somersaulting, in a very fast, random state. This is called spin. Each electron can either have a +1/2 spin or a -1/2 spin, which indicates its direction of motion. There is never a 0 spin. When filling orbitals, electrons spin in pairs, one + and one -. The electrons with an up (+) spin fill first, and the electrons with a down (-) spin fill second. It would look like this:

These boxes fill in a certain order-all of the boxes in one column will fill with up spin electrons first, and then down spin. So, for example, if the element has a configuration of 1s2 2s2 2p3, it would look like this:

As you can see, we filled the boxes with up arrows (electrons) first. If we had more electrons, we would go back and add them in to the second column, as down spin electrons.