The delocalization of electrons can be complicated, confusing and confounding! How do those little dots move about the molecule on my paper and what does all of it mean? On paper, we only estimate the location of electrons. In reality they occupy areas of space around atoms called orbitals. Further complicating things, electrons are often shared between atoms. In order to clarify the process of electron delocalization and the many effects that it can have we will start with a molecule that has received a lot of media buzz in recent years, ozone. Ozone is O3, three molecules of oxygen bonded together. Let’s take a look at the Lewis Structure of ozone.

This is also an accurate depiction of ozone! The relationship between these two images is that they are resonance structures. All that changed from one to the other is the location of the electrons! Let’s take a closer look at the movement of the electrons.

To keep track of the movement of electrons notice in the second structure that the pi-bond formed between the pink oxygen and the green oxygen is pink to indicate that it was formed from the electrons that were previously on the pink oxygen. Also note that the “new’ lone pair on the blue oxygen is drawn in black to indicate that it came from the pi-bond between the green and blue oxygen molecules. So, how does ozone exist in nature? In fact, ozone exists “in between” its two resonance forms. We can consider each bond to be a “1&1/2 bond.” It is neither a single bond nor a double bond, instead, it has characteristics of both.

Part II: An Example of The effects of Electron Delocalization

The specific location of electrons can have far reaching effects. For example, certain reactions require a specific electron configuration around certain atoms. In a benzyne reaction, for example, both resonance structures of the substituted benzene must be considered to determine the products. I will spare you the gory details (ie- the mechanism) of this reaction but we will see the effect that electron delocalization has on the reaction, regardless. Observe the following example:

Note that there are three unique products from this reaction. The second and fourth product illustrated are the same. Without knowledge of electron delocalization and the know-how to react BOTH resonance structures of metafluoro-toluene one would incorrectly resolve that there are 2 products of this reaction. Hopefully this example helped to illustrate the far-reaching implications of electron delocalization.

The ability of electrons to delocalize throughout an aromatic molecule is what makes the molecule exceptionally stable. Specifically the second criterion, continuous pi system, relies on the concept that electrons can delocalize/resonate throughout the molecule. Review the following compounds and determine if they are aromatic:

All three compounds are aromatic as they satisfy the criteria outlined above. As an example, the first one is analyzed below. 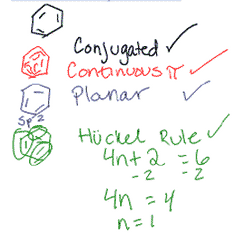 A resonance structure illustrates another form of a molecule as it exists in nature.

It is important to consider electron delocalization when writing a reaction mechanism.

Electrons do not move from or change after a bond is formed.

Which of the following is a valid resonance structure for carbon dioxide?

The correct answer here would be B.
Sign up for free to access more Science resources like . Wyzant Resources features blogs, videos, lessons, and more about Science and over 250 other subjects. Stop struggling and start learning today with thousands of free resources!
<< Prev (Electron Configuration)
Next (Aufbau Principle) >>
ScienceChemistryElectronsResonance
Mark favorite