Written by tutor John B.

An electrochemical cell is a contained system in which a redox reaction occurs in conjunction with the passage of electric current. There are two types of electrochemical cells, galvanic cells (also known as voltaic cells), and electrolytic cells. Both kinds of electrochemical cells contain two electrodes, which are essentially two pieces of metal that serve as the sites for the oxidation and reduction half-reactions separately. The electrode at which oxidation occurs is called the anode, and the electrode where reduction occurs is called the cathode. This is true for both galvanic and electrolytic cells. The oxidation and reduction half-reactions take place on their own electrodes which are connected via a circuit. In between the electrodes is an electrolyte solution through which ions move freely. As species are oxidized or reduced, they move from electrode to solution or vice versa. In an electrolytic cell, electrical current drives an otherwise nonspontaneous oxidation-reduction (redox) reaction through a process called electrolysis.

Before discussing the specifics of electrolysis, let’s review the following rules about electrochemical cells that are always true:

Electrolysis has numerous applications. For example, most metals occur as metal oxides in the Earth’s crust. In order to convert an oxide to a pure metal, it must be reduced through a nonspontaneous process. One common use of an electrolytic cell is the electrolysis of molten NaCl, which results in the production of sodium metal (liquid) and Cl2 gas. In the diagram below, the external voltage supplies energy sufficient to drive the redox reaction in the direction that is thermodynamically unfavorable (nonspontaneous, ΔG > 0). In this example, Na+ ions migrate toward the cathode where they are reduced to Na (l). At the same time, Cl- ions migrate toward the anode where they are oxidized to Cl2 (g). We can also think of this process as follows: 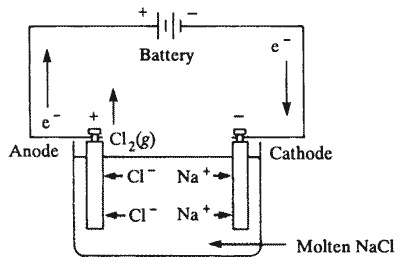 While we can recognize the movement of electrons from the anode to the cathode, how do we determine which electrode will be oxidized and which will be reduced? The relative tendencies of different chemical species to be reduced have been determined experimentally, using the tendency of the hydrogen ion (H+) to be reduced as an arbitrary zero reference point. A reduction potential is measured in volts (V) and defined relative to the standard hydrogen electrode (SHE), which is given a potential of 0.00 volts. The species that will be oxidized or reduced can be determined from the reduction potential of each species, defined as the tendency of a species to gain electrons and be reduced. Each species has its own reduction potential – the more positive the potential, the greater the species’ tendency to be reduced. Standard reduction potential, (Ered°), is measured under standard conditions: 25°C, 1M concentration for each ion participating in the reaction, partial pressure of 1 atm for each gas that is part of the reaction, and metals in their pure state.

E°ox is the oxidation potential of the anode, which is the negative of the reduction potential. The standard emf of an electrolytic cell is negative.

Michael Faraday was the first to define certain quantitative principles governing the behavior of electrolytic cells. In his theory, the amount of chemical change induced in an electrolytic cell is directly proportional to the number of moles of electrons that are exchanged during a redox reaction. The number of moles exchanged can be determined from the balanced half-reaction. In general, for a reaction that involves the transfer of n electrons per atom M,

According to this equation, one mole of M(s) will be produced if n moles of electrons are supplied. Additionally, the number of moles of electrons needed to produce a certain amount of M (s) can be related to the measureable electrical property of charge. One electron carries a charge of 1.6 x 10-19 coulombs (C). The charge carried by one mole of electrons can be calculated by multiplying this number by Avogadro’s number as follows:

This number is called Faraday’s constant and one faraday (F) is equivalent to the amount of charge contained in one mole of electrons (1 F = 96,487 C, of J/V) or one equivalent.

Let’s look at a practical application of Faraday’s Law. In quantitative electrolysis, the total charge transferred can be calculated using the following equation:

How many grams of zinc are deposited on the cathode of an electrolytic cell if an electric current of 1.00 A is run through a solution of ZnSO4 for a period of 10 minutes?

Determine whether each of the following statements is true or false.

Electrolysis is a spontaneous process.

Electrolytic cells are driven by battery or other external voltage sources.

In an electrolytic cell, electrons flow from the cathode to the anode through the wire.

Faraday's constant is useful when calculating the amount of material that is oxidized or reduced in a plating operation.

A. True
B. False
The correct answer here would be B.
Sign up for free to access more Science resources like . Wyzant Resources features blogs, videos, lessons, and more about Science and over 250 other subjects. Stop struggling and start learning today with thousands of free resources!
<< Prev (Orbital Hybridization)
Next (Voltaic Cells) >>
ScienceChemistryElectrons
Mark favorite