What is the Born–Haber Cycle (BH)?

It is a series of steps (chemical processes) used to calculate the lattice energy of ionic solids, which is difficult to determine experimentally. You can think of BH cycle as a special case of Hesse’s law, which states that the overall energy change in a chemical process can be calculated by breaking down the process into several steps and adding the energy change from each step.

To understand the BH cycle fully let us define the meaning of lattice energy first.

The energy released in the following processes is called is called lattice energy:

where k is a constant, Q1 and Q2 are the charges on the cation and anion respectively, and r is the inter-nuclear distance.

This overall chemical process can be broken down to many intermediate steps:

As you can see, the lattice energy is hugely exothermic so offsets the other endothermic processes including energy of sublimation, ionization energy of Li(g) and the bond dissociation energy of F2(g). The final overall process of formation of LiF from lithium (s) and F2(g) is exothermic: energetically favorable.

3. From your knowledge of ionic radii and the charge on the cations and anions in the following compounds, arrange the compounds in the order of increasing lattice energy.
MgSe,       MgTe,       K2Se,       K2Te

Example 2: Lets calculate the lattice energy for KCl from the following literature values via the Born-Haber cycle. 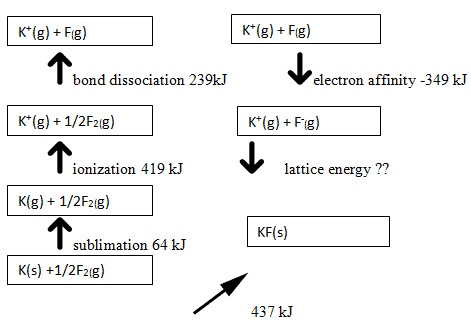 Test yourself: (answers found at bottom of page)

4. Through the BH cycle calculate its lattice energy from the following energy data.

Answers to Test Yourself questions: