Explanation of Acid – Base Problems

THE FOLLOWING SALTS IN WATER SOLUTION WILL HAVE A pH OF 7, -7(less than 7), +7(more
than 7), OR INDETERMINATE (I). FOR EACH PREDICT THE pH OF THE SOLUTION.

7. RbF is an alkaline salt because RbOH is strong and HF is weak. pH is over 7.

The only two materials in the solution are water and HCl. The water alone
would provide 1 E-7 Molar hydrogen ion. The HCl is a strong and soluble acid,
so all of the acid is in the form of ions, providing 0.0115 Molar hydrogen ion.
There is no need to consider the hydrogen ion from water as it is much less than
five percent of the total hydrogen ion concentration.
The concentration of hydrogen ion is adequately estimated at 0.0115 M.
This is only a pH box
problem. As a final answer,
We suggest rounding pH values to one decimal place. Few pH meters
are that accurate.

Ba(OH)2 is a strong base,
that is, up to its solubility limits the compound will be completely ionized
in water solution. [(OH)–]
is twice the [Ba(OH)2]
because for each mol of Ba(OH)2
there are two mols of hydroxide ion. The ionization of water, the only
other possible source of hydroxide ions, produces nowhere near
five percent of the hydroxide ion available from
Ba(OH)2, and so:

The only two things in this solution are water and acetic acid, a weak acid. The 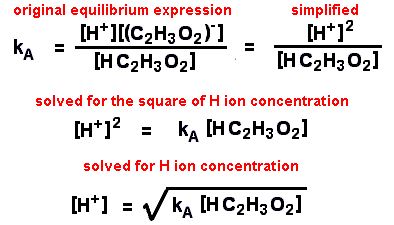 Oh, no. We have a complication. H2CO3
has such a small kA (5.37
E-10 for the first ionization) and the acid is in such small concentrations
that the [H+] from
the acid will be not much more than the [H+]
from the ionization of water. The other possible sources of
[H+] are the second
and third ionizations of the boric acid, but they both have
kA‘s that are far from the
first ionization, so they should not be of any significance.

What you would find, if you assume the ionization of water to be negligible,
is a silly answer. You try it. Use the standard square root of (
kA times
[H3BO3]).
You get a pH OVER seven. (pH = 7.1) Ridiculous. Boric acid is an acid
and should result in a pH of less than seven.

There are several ways to do this. One way is by successive approximations.
First use the ionization constant formula to calculate the
[H+]
from the acid, then use that [H+]
to find the [OH–].
Since the [H+] from
water equals the [OH–],
you can add that number back to the [H+]
from the acid to get a first round total [H+].
Use the first round total [H+]
in the acid dissociation equation to find the concentration of acetate ion and
that would be equal to the second round estimation of the [H+]
from acid. Keep going around that circle until you get three stable
significant digits for the total [H+]. 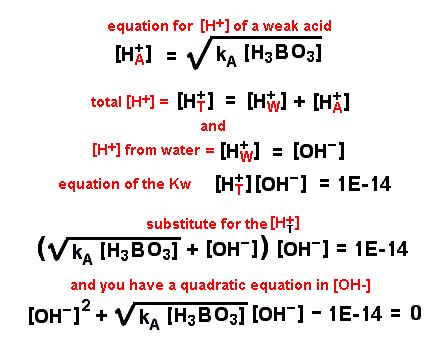 Or you could substitute in for the [OH–]
ion and solve for the [H+].

The hydroxide ion is in excess. The two sources of hydroxide ion
are the [H+] and
water, but the contribution from the water is negligible.

The other assumption, that the amount of dissociated ion is negligible, is
also valid because the concentration of base is so large. (Try it if you
don’t believe it.) 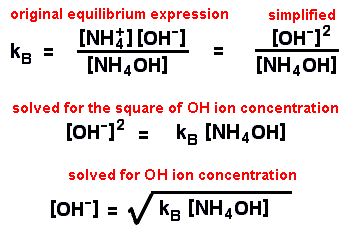 Now substitute the numbers and do the math.

In a solution that has only water and phosphoric acid there are four possible
sources of hydrogen ion, the water and the three ionizations of the phosphoric
acid. Each ionization has a different
kA.

The hydrogen ion concentration from the first ionization can be calculated
by the usual square root of ([acid]kA)
to get an initial estimate.

From the initial estimate, the [H+]
from the first ionization (0.063243656 M) will be more than 5% of the
acid concentration (0.578 M). We will have to use the more accurate form of the equation that includes the
decrease in unionized acid concentration by the ionized forms. 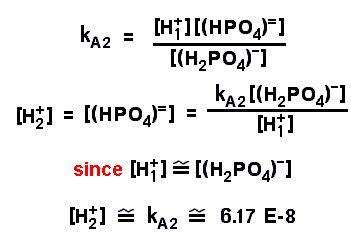 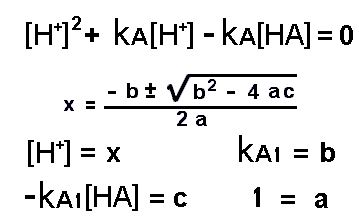 When you substitute the numbers, the math looks like:

If you are really sharp, you noticed that the original estimate using
the simplified method of calculating the [H+]
produces the number 0.063243656, and that the pH of that [H+]
is the SAME as the number from the more complex calculation when rounded to
one decimal point.

Since the HCL is a strong acid, it contributes 0.16 Molar hydrogen ion to
the solution, but the phosphoric acid is a weak acid and the [H+]
from it can not calculated by the square root of (kA
[H3PO4])
because the [H+] is
not equal to the [H2PO4].
We must go back to the ionization equilibrium equation for the first ionization
of phosphoric acid. 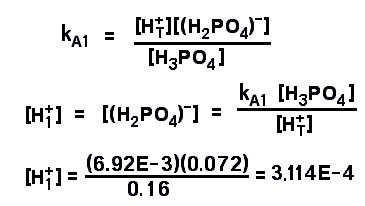 So the pH depends only on the [HCl].

This is a genuine buffer problem. Added to the water are a weak acid and
a salt containing the anion of the acid.

There are two good ways to work buffer problems, with the Henderson- Hasselbach
equation or with the ionization equilibrium expression of the weak acid or base.
I personally have a mental block against the H-H equation because I can never
remember whether it uses a positive or negative log and which concentration
goes on top. You can use it if you wish. Particularly if you need to calculate
buffers often, you should engrave it upon your gray matter. If you really need it
and can’t remember it, you can derive it from the ionization equilibrium
expression.

There are three cautions you need to observe with either equation: (1) Make
sure you are using the correct concentration for each variable, (2) check
to see if the numbers you propose to use are going to be within the 5% rule
for simplification, and (3) estimate the answer from what you know and make sure
your final answer is reasonable.

Before actually doing the problem, estimate the answer from your own reasoning.
In this case, the pkA of acetic
acid is 4.76. The rule is that an equimolar buffer has a pH equal to the
pkA and in this problem
there is less potassium acetate than acetic acid, so the pH must be lower
(more acid) than the pkA
within a pH unit or so. If the acetic acid were the only solute, the pH estimate
would be the square root of (acid concentration times kA).

The answer should be somewhere between pH of 2.3 and 4.8 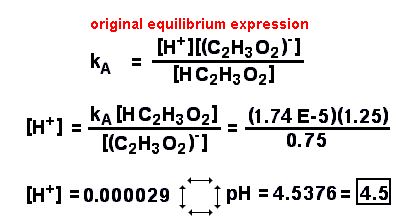 The answer of pH = 4.5 is a reasonable one by our estimation because it is
more acid than the pkA of 4.76.

It is a little easier to do this problem by the
Henderson- Hasselbach equation, if you are sure you know it. You must still
make sure you are substituting correctly and that your assumptions for
simplification are valid (within 5%). The H-H equation is not much good for
solutions in which either the acid or ion concentrations are more than ten
times one another or in which the concentration of either material is less
than one hundred times the kA
because it doesn’t easily adapt to a quadratic form. 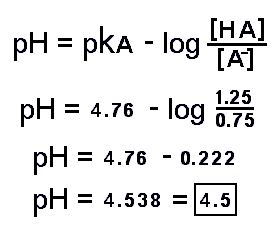 Here is another acid – conjugate base buffer pair. This time there is more
conjugate anion than acid concentration, so we expect the pH to be somewhat
higher (more alkali) than the pKA.
As in the previous problem, there seems to be no complication with either
of the components being of too small a concentration or the concentrations being
too close to the KA,
so there should be no need for a quadratic equation.

By the ionization equilibrium equation: 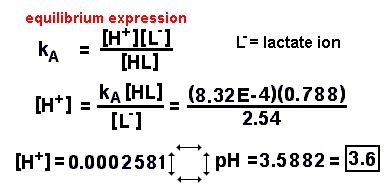 Or by the H-H equation, you get the same answer. 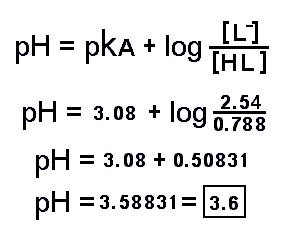 Here we have a weak base and its conjugate cation. We can use the ionization
equilibrium expression, but it is different from the acid ionization expression.
The ammonium hydroxide ionizes into hydroxide ion and ammonium ion, so it
would be best to find the concentration of the hydroxide ion.

The ionization
equilibrium expression must have the kB rather than a
kA, or the Henderson-
Hasselbach equation has to have all its components adapted to alkali, but it
is completely analagous to the acid calculation. In either way of doing the
problem, you will have to change the answer to the pH by the pH box.

Or by the H-H equation, you get the same answer. 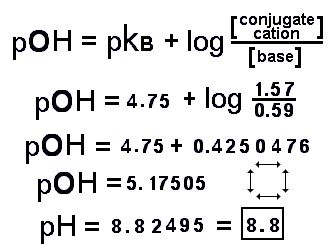 Does the answer make sense? The combination is a base buffer and the pH is
slightly base. There is almost three times the concentration of ammonium chloride
than ammonium hydroxide, so the pH of the mixture is more acidic than it would
be if the buffer had been equimolar. (pH = 9.25)

Here is a problem you may have to actually use one day. In biochemistry some
enzymes need to be at a particular pH to work at maximum. You would choose a
weak acid with a pkA close
to the pH you need. (The pkA
of acetic acid is 4.76.) The osmolarity (the total molar amount of dissolved
materials) may be specified. (It is here. The total of acetic acid and sodium
acetate should be at 0.15 Molar.) 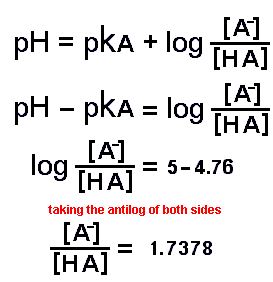 What we get from the H-H equation is the ratio of the two constituents. We can
use that ratio as one of the equations in a two – equation – two – unknown
setup to substitute one into the other and calculate the concentration of
acetic acid, [HA], and the concentration of sodium acetate,
[A_]. 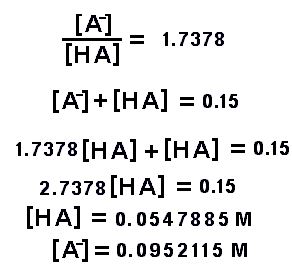 The real answer is that you need to weigh 39.1 g of sodium acetate,
measure 274 ml of the 1.00 Molar acetic acid and put them into a 5 liter
volumetric flask with enough water to dissolve the sodium acetate. Then fill
the volumetric flast to the line with distilled water and mix the solution.

FOLLOWING ARE TITRATION PROBLEMS. ASSUME THAT THE pH INDICATOR WILL BE THE RIGHT ONE TO
BALANCE THE AMOUNT OF ACID AND BASE. SOME OF THE TITRATIONS ARE NOT ACID –  BASE
TITRATIONS. AGAIN ASSUME THERE IS AN INDICATOR THAT WILL TELL WHEN MOLAR AMOUNTS ARE
MATCHED.

21. 23.45 mL of 0.275 M sodium hydroxide was used to titrate against mL of acetic acid.
What was the concentration in M of acetic acid?