In order to survive, a cell must maintain a careful balance of nutrients, electrolytes, water, and metabolites in its cytoplasm at all times. Many of these required nutrients are supplied to cells by the bloodstream (multicellular organisms) or extracellular fluid (single-celled organisms), and thus the cell must have ways to get these substances into its cytoplasm through its membrane. Also, cells must be able to excrete waste products into the extracellular space so the cytoplasm does not accumulate toxic and harmful products. In addition, an exact gradient of electrolytes must be maintained across the cell membrane in order for cells to perform normal functions like movement, signaling, and both anabolic and catabolic activities. Thus the cell has complex systems of transport to move these substances both in and out of the cell. 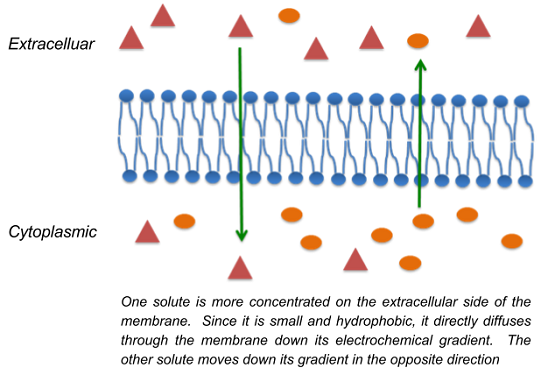 When one side of the membrane is positively or negatively charged compared to the other side, this is called an electrical gradient or potential. Positive ions will be attracted to negative ions and thus they will spontaneously move toward each other until neutrality across the membrane is reached. Basically, it is thermodynamically favorable for a molecule to move to the side of the membrane where the electrochemical gradient is lowered, or where there are less molecules like itself. Active transport occurs when a solute moves "uphill" or against its electrochemical gradient because energy is required to concentrate a molecule in an area.

Generally, small nonpolar molecules, such as cholesterol, CO2 and O2, diffuse rapidly across the lipid bilayer because they are hydrophobic and dissolve readily in the membrane. Some small polar molecules such as water or urea can also diffuse directly through the plasma membrane but the process is slow for these molecules. The plasma membrane is impermeable to large or charged molecules. Diffusion is the simplest type of passive transport and requires no proteins to occur. The diffusion of water across a semi-permeable membrane, of which the lipid bilayer is an example, is called osmosis, another type of passive transport. Water diffuses toward the side of the membrane that has more solutes so it can effectively lower their concentration and minimize the electrochemical gradient. Maintaining the correct electrochemical gradient requires osmosis, and if the normal electrochemical gradient is disturbed, osmosis can also cause the cell to shrivel or burst.

Because diffusion is a slow process for many important molecules, a process called facilitated diffusion is used by the cells to rapidly transport molecules across the membrane. Facilitated diffusion occurs when proteins, specific for the transported molecule, are used to move the molecule across the membrane. Channel proteins transport molecules down their electrochemical gradient and can be thought of as a tunnel through the plasma membrane that is specific for a certain type of molecule. 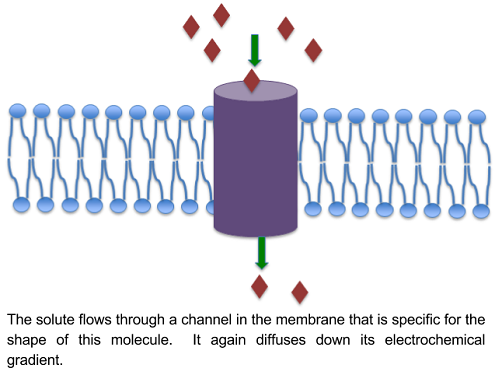 Channels bind weakly to the molecule they transport and are either simply closed or open to movement. Aquaporins are channels specific for water that allow diffusion of water to occur at a much higher rate than diffusion directly through the plasma membrane.

Transporter or carrier proteins are also specific for the molecule they transport, but now the carrier protein actually binds the molecule to be transported and changes conformations in order to move the molecule into or out of the cell. Rather than being simply open or closed, transporters change shape (conformations) when the solute binds and change shape again when the solute is released to the other side of the membrane. This process is relatively fast compared to diffusion, but slow compared to the movement of molecules through channels. Transporter proteins used in passive transport are also called permeases because they make the membrane permeable to a certain substance. Transporter proteins that are used for active transport are often called pumps because work is done and energy expended by the cell to move the molecule from one place to another. More information can be found in our lesson on facilitated diffusion.

It should be noted that transport occurs across all the lipid bilayers in eukaryotic cells, like those around other cellular organelles, in addition to the plasma membrane. The abundance and the specific types of transporter proteins vary in each membrane as each compartment of the cell maintains a particular milieu of substances.

What are the major differences between active and passive transport?

What are some of the types of passive transport, and what are their advantages and limitations?

Diffusion, a physical process that moves a molecule from areas of higher to lower concentration. Diffusion must occur across the lipid bilayer in a cell and thus is very slow for polar molecules or large molecules and doesn't occur at all for ions. Osmosis is a specific kind of diffusion that involves water moving across a semipermeable membrane.

Facilitated diffusion, a biological process that moves a molecule from higher to lower concentration using a specific protein. Facilitated diffusion requires a specific protein for each kind of molecule, and only occurs when a solute is moving down its electrochemical gradient. It cannot be used to concentrate a solute in a compartment or move molecules that have no transporter protein.

What are the types of proteins involved in facilitated diffusion?

Channels are pores specific for a certain kind of molecule. Solutes move very quickly through these pores when they are open and not at all when they are closed.

Why does transport occur in all cells and across every membrane?

Cells must maintain a careful balance of nutrients in every compartment and offsetting this balance will decrease the cell's ability to move, talk to other cells, make energy, anabolize important compounds, and survive.

What is osmosis and what is its major function in cells?

Osmosis is the diffusion of water across a semi-permeable membrane. Osmosis keeps the solute concentration and the osmotic pressure across the cell membrane correct. All life requires water and thus keeping a proper balance of water in the cytoplasm is crucial for life.

Sign up for free to access more Science resources like . Wyzant Resources features blogs, videos, lessons, and more about Science and over 250 other subjects. Stop struggling and start learning today with thousands of free resources!
<< Prev (Natural Selection)
Next (Photosynthesis) >>
ScienceBiologyCells
Mark favorite