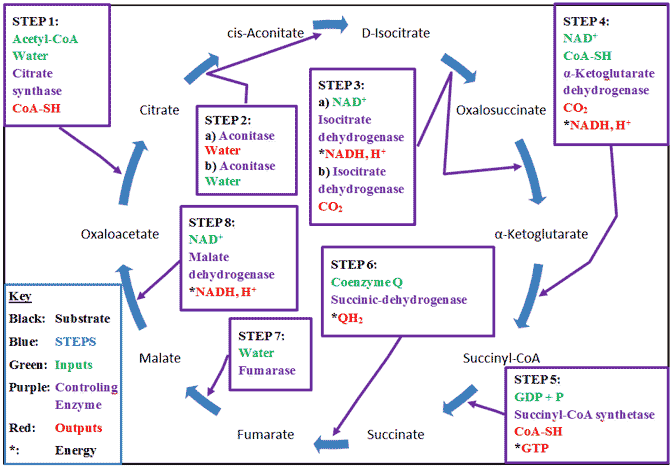 The Krebs Cycle (also known as the Citric Acid or Tricarboxylic Acid (TCA) cycle) is the process through which aerobic cellular metabolism occurs. Hans Krebs received the 1953 Nobel Prize in Medicine for his “discovery” of the citric acid cycle. This cycle involves a series of reactions involving a (1) a substrate, Oxaloacetate, that is modified in every reaction, (2) Acetyl–CoA, from which energy is extracted, (3) energy transport reactants, which collect the extracted energy, and (4) the controlling enzymes, which regulate the steps of the cycle. This cycle is ubiquitous in living organisms, single and multi-celled, both plants and animals — including humans. Organizationally, the process is often divided into 8 steps, one for each controlling enzyme, usually beginning with the combination of the Oxaloacetate substrate to the Acetyl–CoA, which is produced from either glycolysis or pyruvate oxidation.

But because of the cyclical nature of the process, different methods of categorizing the reactions and their reactants, as well as ongoing scientific investigation, there is some variation in terminology, organization, and detail. Also, while the Krebs cycle is a topic in elementary science and biology, it is also studied in detail in advanced collegiate biology and biochemistry courses which can lead to respectively over or under simplification. Because of these issues, tutors and students should exercise care when utilizing this summary and diagram to ensure that the language their answers use correspond to the assigned class materials and their instructor’s expectations. Nevertheless, this summary tries to provide a simplified description balanced with sufficient detail to enable understanding of the process while being able to use it as a base upon which supplemental information can be added.

Energy Extraction via the Krebs Cycle

The Krebs cycle is the primary metabolic pathway through which aerobic energy is released from carbohydrates, proteins, and fats in a useable form. When measuring the energy production of the Krebs cycle, the output is measured in molecules of ATP (Adenosine triphosphate) per molecule of glucose. In total, the theoretical (and typical textbook) yield of cellular respiration (including the Krebs cycle) from one molecule of glucose is 38 molecules of ATP, but in practice the actual yield is closer to 30-32 ATP. Since one molecule of glucose produces two molecules of Acetyl–CoA, the Krebs cycle’s energy output is usually expressed as the product of the two cycles necessary to breakdown both Acetyl–CoA’s. Two Krebs cycles create two GTP, Guanosine triphosphate, which can be readily converted into 2 ATP. The other energy-producing products of the Krebs cycle (NADH, and QH2) theoretically generate an additional 22 ATP, but in practice produce closer to 18 ATP via the mitochondrial electron transport chain. This practical difference results from energy lost from the active transport of various reactants as well as the leakage of electrons within the electron transport chain.

Steps in the Krebs Cycle

The first step is to put energy into the system. The Citrate synthase links to the Oxaloacetate substrate which can then bind to the Acetyl–CoA’s acetyl group, which then releases the Co-enzyme A. This produces the very familiar and common citric acid, i.e. a citrate. It is this six-carbon molecule that will be broken down, and remolded back into Oxaloacetate.

Unfortunately, citrate is too stable for the reactions that follow. So, the Acontiase links to the Citrate to move one of its oxygen atoms to create a more unstable citrate isomer. It does this by extracting a water molecule producing cis–Aconitate, and then reattaching the water to produce D–Isocitrate.

With the citrate rearranged, the process begins in earnest; the Isocitrate dehydrogenase links to the D–Isocitrate, which transfers an electron to the NAD+, Nicotinamide adenine dinucleotide, producing its energized form NADH. With the electron removed, the enzyme then detaches a carbon atom to form a molecule of carbon dioxide. This transforms the substrate from a 6-carbon molecule to a 5-carbon molecule.

This step involves a highly-developed complex of 24 enzymes. Labeled here α–Ketoglutarate dehydrogenase, this complex transfers also electrons to NAD+producing NADH, removes another carbon atom as carbon dioxide (transforming the substrate from a 5-carbon to a 4-carbon molecule), and relinks the Coenzyme A to the substrate.

This step directly produces ATP because the substrate’s link to Coenzyme A is sufficiently energetic to power the reaction. In mitochondria, the enzyme links to the Succinyl–CoA and uses the energy from releasing the coenzyme, to add a phosphate (P) to GDP to produce GTP. In the cytoplasm, a variation on this enzyme can produce ATP directly. This also begins the manipulation of the substrate to re-produce its original form.

With the carbons removed, the rearrangement process begins manipulating the hydrogen. When the Succinate dehydrogenase links to the substrate, it releases two hydrogen atoms attaching them to a carrier, ubiquinone (Q), or FAD Flavin adenine dinucleotide. With the additional 2 electrons ubiquinone forms ubiquinol (QH2 or FADH2) which is then transferred to power the electron transport chain.

Fumarase continues the rearrangement process by adding Hydrogen and Oxygen back into the substrate that had been previously removed.

Process as a whole

Reviewing the whole process, the Krebs cycle primarily transforms the acetyl group and water, into carbon dioxide and energized forms of the other reactants. Additionally, many of the enzymes and substrates are also intermediaries in other biochemical reactions of both amino acids and fatty acids. As Krebs (1953) himself noted in his Nobel prize lecture, the citric acid cycle is also part of the energy-releasing process of the metabolic oxidation of proteins and fatty acids as well. As a result the Krebs cycle is the primary method of cellular energy production.

The Krebs cycle is both the central hub of cellular metabolism and one of Biology’s prototypical biochemical processes. Since the Krebs cycle regulates and enables the cellular oxidation of glucose and plays a role in the metabolism of proteins and fats, it is the fuel source for cellular activity and therefore foundational for oxygen-based life. But the Krebs cycle also illustrates the role of biochemistry in biology as a field as well. It illustrates evolutionary biology, in that numerous organisms from single-cell to human beings share this same biochemistry. And it illustrates enzymatic reactions and biological conservation of resources and efficiency. As a result, the Krebs cycle is a critical part of science instruction to illustrate both how cellular biology works, and how biology as a field works to explore that biology.

Sign up for free to access more Science resources like . Wyzant Resources features blogs, videos, lessons, and more about Science and over 250 other subjects. Stop struggling and start learning today with thousands of free resources!
<< Prev (Homeostasis)
Next (Meiosis and Mitosis) >>
ScienceBiologyCells
Mark favorite