What is Genetics? Genetics is the study of Genes. Genes are units of heredity which encode genetic characteristics, or traits. These genes are passed from generation to generation encoded on Chromosomes, gigantic structures made of tightly organized DNA. In some species, like Prokaryotes, they are very small units, with all extra space removed. In others, like most Eukaryotes, genes are vast sprawling structures that can cover millions of bases of DNA.

Not every gene is the same. Take one of your own genes as an example. You have two copies of that gene, one from each parent. These genes may be encoded slightly differently, and thus can have stronger or weaker effects. These differently coded versions of a gene are called Alleles. Alleles arise because of Mutation, which is an inheritable change in a gene. Parts of the genetic code for that gene may be changed, added, or removed. That mutation is then passed on to your children. Mutations can have many different effects, some positive, some very negative (like cancer), and many mutations have no effect whatsoever.

Genes do not float around randomly inside the cell. They are organized into structures called Chromosomes. Every eukaryotic species has 2 sets of chromosomes, one from each parent. In the higher eukaryotes they are carried by special cells called Gametes; the sperm and the egg. 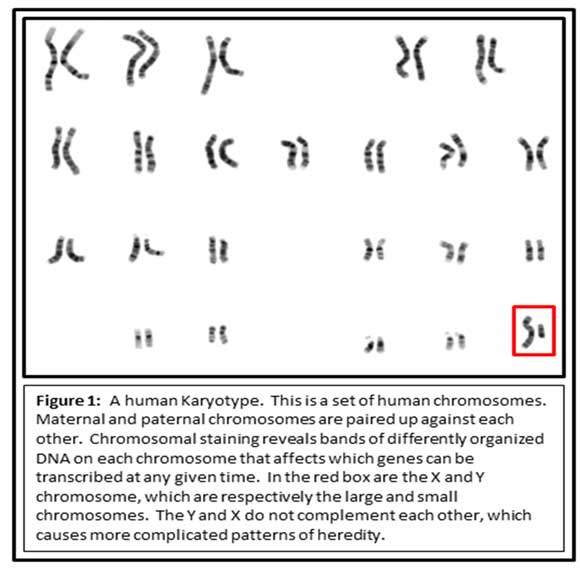 If genes are on chromosomes, how come you don’t inherit one chromosome from your father, and pass the same chromosome along to your children? The reason is called Meiosis. Most cells divide in a process called Mitosis. Meiosis is a specialized method of cell division for the gametes, in which, unlike Mitosis, each maternal chromosome is able to swap material, or cross over, with its companion paternal chromosome, and vice versa. This means that each chromosome you get from your mother will have some genes from her father, and some from her mother. The exception is the sex chromosomes, which we’ll discuss later. This leads to an interesting phenomenon called Linkage. Linkage basically tells you what percentage of the time 2 traits cross over together. If a parent has 2 traits, and you continually see either both traits together in offspring or neither trait in offspring, then that indicates a strong linkage. If one trait crosses over to another chromosome, so does the other. Other genes assort completely independently. These genes are Unlinked. Linkage actually physically translates into distance on a chromosome. If genes are close together on a chromosome, they tend to cross over together. Before molecular techniques were available to look at DNA directly, the only way to tell where a gene was involved linkage. If you knew that a gene was linked with other genes, and you knew the position of those other genes, you could figure out roughly where that gene was.

Since a gene is a unit of information, how can we tell what that information is, and when it’s changed? One answer is by looking at the Traits that that gene affects. A trait is a measurable attribute such as height, eye color, or good(or bad) coordination. If I have an allele that causes baldness, for example, the allele I have is called my Genotype. The baldness that the allele causes is my Phenotype. This is a very important difference. Your genotype is your genetic base, the genes that encode your traits. The phenotype shows the traits those genes affect, plus the effects of the environment on those traits. A genotype that encodes the trait of height can still produce a shorter person, if that person doesn’t get proper nutrition. Similarly, grapes with the same genotype will taste different if grown in different soil and climate. Each trait is influenced by the environment, but some are mostly genetic with little environmental input, and others are mostly environmental with little contribution from your genes.

In other species, such as yeast and fruit flies, what we often do to find a trait’s genetic component is do a mutation screen. How we do this can vary, depending on the type of mutations we want. Exposure to UV light causes deletion or transposition of large chunks of DNA. We can also use chemical agents that cause single bases to be changed. A third, more modern option is to use jumping genes. These are genes which hop through the genome from generation to generation, and can be turned on or suppressed when we like. . They hop semi-randomly, and the type of jumping gene you choose can affect where it will go. If they jump into the middle of another gene, they disrupt it. What we do, therefore, is expose the parents to the mutagen, and then let them breed. Their offspring will have random mutations. We then screen these mutants by testing for variations in the trait that we are interested in. When we see those mutations, we know we have mutated a gene that affects the trait we are looking at.

Now, if the gene you have causes the phenotype you get, that would be nice and simple. However, since you get different alleles of the gene from your mother and father, what happens if your maternal and paternal alleles would cause different phenotypes? The answer depends on the alleles in question. Some alleles are Dominant, which means that the phenotype that they cause will get expressed instead of the phenotype of the other allele. Other alleles are Recessive, which means that their phenotype only gets expressed if both alleles are the same, or very similar. Most other alleles are dominant to them. Some genes share dominance, and are called Codominant. The allele that causes a phenotype you would consider normal is called Wild Type, abbreviated as WT. The WT allele is usually dominant over most other alleles, but some particularly strong alleles can override the wild type and are dominant to it. 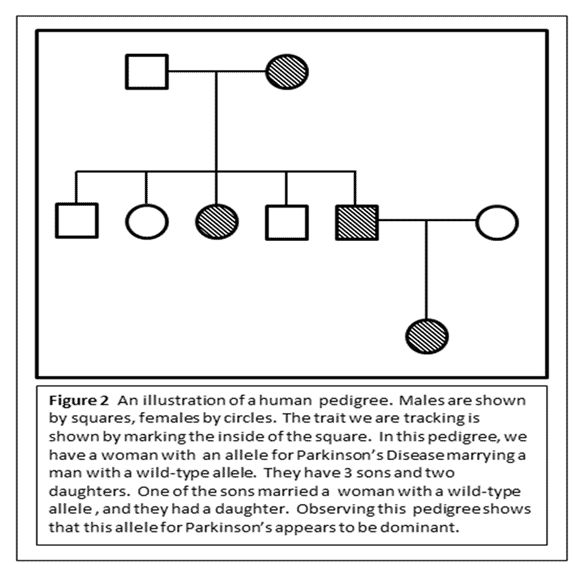 There are other types of complex inheritance. For example, some traits involve multiple genes, and some alleles act differently depending on whether you get the allele from your father or mother. Those are advanced topics, though, and ones that scientists still investigate today. 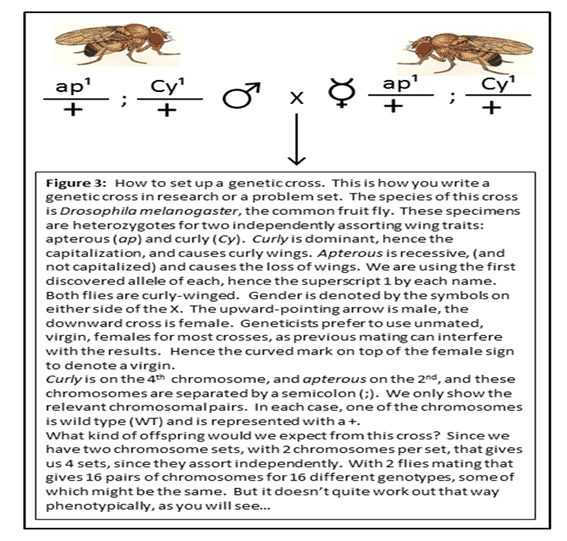 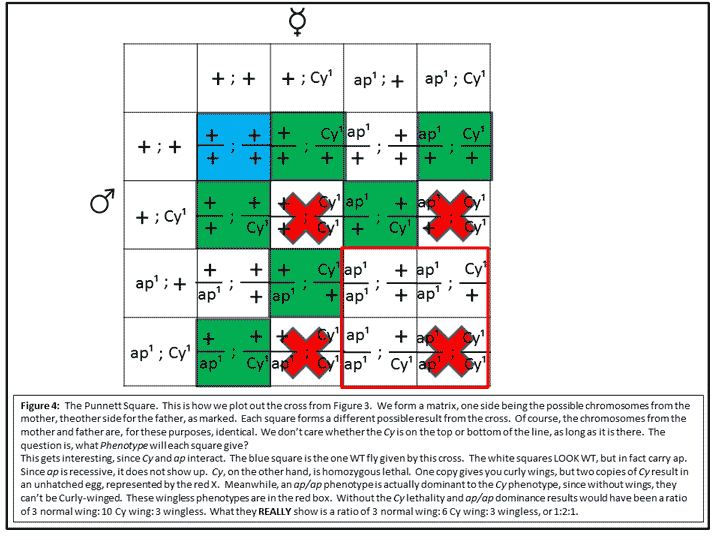 Now, you can practice your knowledge with this genetics quiz!

A. Genetic
B. Environmental
C. A and B
D. neither A nor B
The correct answer here would be B.

If a disease shows up in a grandfather, all of his sons, and all of his grandsons, and never in women, it is most likely to be:

A. X-linked
B. Recessive
C. Y-linked
D. Dominant
The correct answer here would be C.

Genes for coat color in cats are found on the X chromosome. A tortoiseshell or calico cat has multiple colors, and is almost always female. Male calico cats are sterile and very rare. What is the genotype of male calico cats?

You inherit 2 alleles of every gene except for those on the:

A. clones
B. male
C. different sexes
D. formed from different eggs
The correct answer here would be A.
Sign up for free to access more Science resources like . Wyzant Resources features blogs, videos, lessons, and more about Science and over 250 other subjects. Stop struggling and start learning today with thousands of free resources!
<< Prev (Facilitated Diffusion)
Next (Glycolysis) >>
ScienceBiologyGenetics
Mark favorite