When you look at life on Earth, it is easy to see the great biodiversity -- thousands of species that are able to live in many different habitats. However, you could also note some things that many different species have in common. For example, mammals tend to have four limbs and birds usually have two legs and two wings. Why do these patterns exist? All life on earth evolved from a common ancestor a few billion years ago. Evolution is the change in heritable traits in a population over time, and is the reason why we have so many different species today. There are several supposed mechanisms of evolution, and several results of evolution.

A “mechanism” of evolution refers to how evolution happens. For the heritable traits present in a population to change, there must be changes originating in the DNA of some individuals, or an environmental change that influences which traits are favorable.

Darwin’s theory of natural selection is the most well-known mechanism of evolution. Darwin proposed that certain traits will be “selected for” by the environment, meaning the individuals with that trait are more likely to survive, reproduce, and therefore pass on the trait. Over time, the population as a whole will tend to have that trait.

Other mechanisms of evolution, such as genetic drift and biased mutation, are due to random mutations within the genome of the population. Genetic drift refers to the change in the genome of a population due to random changes as the genes are passed to the next generation. Biased mutation refers to the idea that mutations that are statistically likely to happen more frequently will eventually become more common in the overall population, assuming there are no other factors selecting for or against that mutation.

There are many different outcomes of evolution. The one that is most impressive is adaptation, in which a species evolves to be well-suited to its habitat. Adaptation can best be explained by natural selection -- the individuals that are best-suited to the environment pass on their genetic material, and so over time the population as a whole becomes better suited. Darwin’s finches are a good example of adaptation by natural selection. 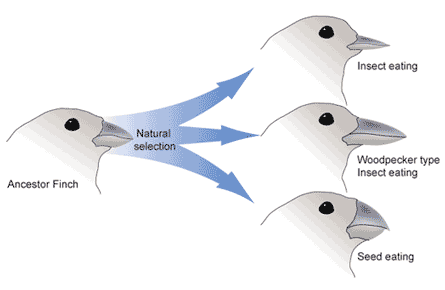 Adaptations of a species in response to another species can result in coevolution. Species that have parasite/host or predator/prey relationships tend to evolve together in an evolutionary “arms race”. For example, a plant might evolve to have a toxin or oil to repel insects, but eventually a certain insect develops resistance to that toxin. Coevolution can also result from mutually beneficial relationships, such as the relationship between bees and the flowering plants that they help to pollinate.

Determine whether each statement is true or false.

All life on Earth evolved from a common ancestor.

An animal that is well-suited to its habitat will die too early to have offspring.

If two mutations' results in traits are equally suitable for the environment, the mutation that occurs most frequently will become more frequent in the population.

A. True
B. False
The correct answer here would be A.
<< Prev (Endocytosis and Exocytosis)
Next (Facilitated Diffusion) >>
Mark favorite