The first step in both anaerobic and aerobic respiration is called glycolysis. This is the process of taking one glucose (sugar) molecule and breaking it down into pyruvate and energy (2 ATP). We will discuss this in depth during aerobic respiration.

Fermentation is the process by which we make wine and other types alcohol. Through an anaerobic process, yeast will break down the glucose in the grape juice and convert it into pyruvate. The pyruvate is then fermented into ethanol/alcohol. During anaerobic respiration CO2 is also released, this is why there are bubbles in wine and champagne (the release of CO2 during anaerobic respiration is also how yeast causes bread to rise). Of course, other organisms and bacteria can utilize this method of respiration as well, but yeast is the organism of choice for making wine.

Here’s what you need to know so far: 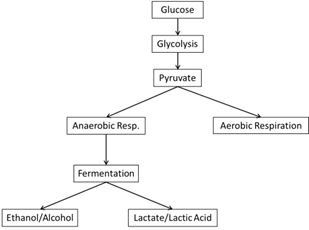 In order to understand cellular respiration we first need to understand the basic chemical equation. Think about what you do when you’re tired and need more energy to stay awake. You yawn, which takes in a lot of oxygen, or O2, and you drink something with a lot of sugar, like Mountain Dew. A scientific term for sugar is glucose and the chemical formula for glucose is C6H12O6. We need O2 + C6H12O6 for energy to stay awake, just like we need O2 + C6H12O6 in order for cellular respiration to take place.

Now let’s think about what happens to the oxygen we inhale after a big yawn. It goes to our lungs to get utilized and we breathe out carbon dioxide, or CO2. Mixed with the carbon dioxide are water droplets, or H2O. That’s why our breath fogs up the glass when we exhale onto the car window.

Putting all this information together we get glucose plus sugar makes carbon dioxide, water, and energy. This is the cellular respiration equation:

In this equation, 6 is the magic number. There are 6 oxygen, 6 carbon dioxide, and 6 water molecules. There are also a couple sixes in our formula for glucose. Remember the number 6 when writing this equation.

We will save the discussion of photosynthesis for a future lesson.
If you understand everything up to this point, you are already 50% there.

Glycolysis is the first step in cellular respiration for both anaerobic and aerobic processes. Glycolysis takes place in the cytosol of a cell. In the cytosol we convert 1 molecule of glucose into 2 molecules of pyruvate. Of course glucose can’t be converted into pyruvate without a little bit of help. This conversion requires 2 NAD+ and some energy, in the form of 2 ATP. Once glycolysis is completed, we are left with 2 pyruvate, 2 NADH, and 4 ATPs as products. Since glycolysis yields 4 ATP, but we had to use 2 ATP in the beginning of the process, the total Net Gain of energy is 2 ATP. The cell will use the 2 ATP for energy. NADH will be recycled back to NAD+ in a future process so that it can be used in glycolysis again. The 2 pyruvate molecules will be used for the second step of cellular respiration.

Don’t be confused. The Krebs cycle can be referred to by several different names. Krebs cycle, citric acid cycle and TCA (tricarboxylic acid) cycle can all be used interchangeably. From now on, I will refer to this step as the Krebs cycle.

The Krebs cycle is the second step in aerobic respiration and takes place in the matrix of the mitochondria (middle of the mitochondria). This is a multi-step process, but don’t worry, we don’t have to memorize all of the compounds or each enzyme involved. Here, we will only focus on the key players.

We start with one of the two pyruvate molecules that were made in the cytosol of the cell during glycolysis. The pyruvate molecule enters the matrix of the mitochondria where it is converted to acetyl CoA. Acetyl CoA is responsible for initiating a cyclical series of reactions. Acetyl CoA creates the first compound in the Krebs cycle (Citrate) by enzymatically transforming the very last product formed in Krebs cycle, Oxaloacetate, into Citrate. The names of these specific compounds are not important, however, it is important to understand why it is referred to as a cycle. 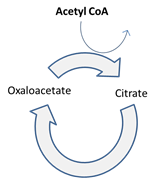 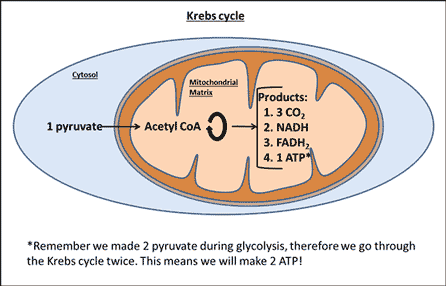 The third and final step of cellular respiration takes place in the inner mitochondrial member and is called the electron transport chain (ETC). Remember that the mitochondria are organelles that have two phospholipid bilayer membranes. The ETC takes place within the innermost membrane. Often the term oxidative phosphorylation is used interchangeably with the electron transport chain; however, oxidative phosphorylation is the series of reaction that takes place during the ETC.

You may have noticed that we are discussing aerobic respiration and haven’t yet discussed oxygen’s role, but we know that oxygen is utilized. Oxygen comes into play during this third process. This is also the step where the most energy is made. Since this third step makes the majority of ATP and it takes place within the mitochondria, we refer to the mighty mitochondria as the ‘power house of the cell’ because it supplies most of the cell’s energy.

NADH and FADH2, which are made during the Krebs cycle, initiate the electron transport chain. Both NADH and FADH2 transport electrons down a chain of reactions. NADH or FADH2, whichever is present at the time, will work with electrons and oxygen to convert ADP to ATP. In the process NADH loses its hydrogen and creates a hydrogen concentration gradient across the inner mitochondria membrane. This hydrogen concentration gradient drives the production of more ATP. Since NADH lost its hydrogen, it is now NAD+. Do you remember why this is important? This process recycles NADH to NAD+ so that NAD+ can be reused in glycolysis.

At the end of the ETC, water (H2O) and ATP is made. Depending on how many NADH molecules are available, the electron transport chain makes a total of 32 or 34 ATP. These 32-34 ATP combined with 2 ATP from glycolysis and 2 ATP from the Krebs cycle means that one molecule of glucose (sugar) can make a total of 36-38 ATP. 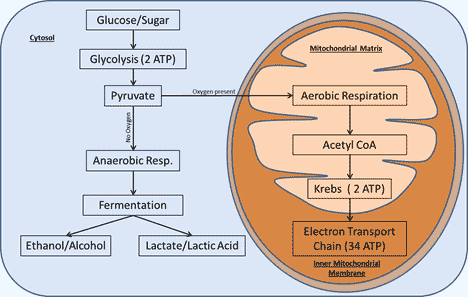