Cells were first described by Robert Hooke in his book Micrographia, published in 1665. Using a microscope, he described the structure of cork as closely resembling prison chambers or monks’ quarters (there is some debate about this). He used the term “cell” to describe these hollow chambers. The Cell Theory was first described in 1839. While the Cell Theory has been altered and revised, most biologists today list three or four general characteristics shared by all cells:

1. The cell is the basic unit of life. Anything smaller than a cell is not alive by definition.
2. All organisms are composed of one or more cells.
3. Cells arise from pre-existing cells.
4. All cells, at some point in their life cycle, contain the genetic material for the entire organism.

The first two characteristics are definitions. The third characteristic was demonstrated in part by Louis Pasteur’s work through 1862. The fourth point is subject to controversy; advocates point to the fact that organisms begin as a single cell with all of the genetic information for the organism and most divide by mitosis. Opponents point to the loss of genetic material that occurs during meiosis, although the loss is of copies of genes. The cells still have all of the genetic information.

While cells do share many traits in common, there are differences. The cells that make a tree are not the same that make a dog. Even within the same organism, there are different types of cells. Your skin cells are different than muscle cells, or bone cells, or blood cells. Like organisms, cells can be characterized by their traits. Two common methods of distinguishing cells are by feeding mechanisms and by internal structure.

Cells must acquire nutrients and eliminate waste products. This can be done in different ways. Some cells are capable of producing food from the raw materials in the cell. This type of cell is called an autotrophic cell. Autotroph literally translates as “self feeding”. Most autotrophic cells on earth are photosynthetic, although in areas where light is not available (ocean bottoms, deep caves underground, etc.) autotrophs carry out chemosynthesis. Some examples of autotrophic cells are plants, algae, and some bacteria. Other cells must acquire their nutrients from other cells. This type of cell is called a heterotrophic cell. Heterotroph literally means “other feeding”. These cells must be able to capture and take in other food stuffs. Some examples of heterotrophic cells include animals, fungi, and some bacteria. There are a few groups of organisms which are mixotrophs. These organisms, such as protists like Euglena, have the capability to photosynthesize when light is available and switch to predation when light is not available.

Cells also vary based on complexity and structure. The first cells were relatively simple in structure and complexity. They are still present and actually outnumber the more complex cells you may be more familiar with. The first cells are termed prokaryotic (literally “before kernel”, meaning before the nucleus). These cells are generally smaller and less active. Usually, prokaryotic cells utilize some form of anaerobic respiration. They have no nucleus or membrane-bound organelles. Their single loop of DNA is termed a nucleoid, but is not isolated from the cytoplasm by a membrane. Prokaryotic cells do have cytoplasm, ribosomes, cell walls, cell membranes and their associated materials. Today, two of the three domains of life are prokaryotic: Archaea and Bacteria (some scientists term this group Eubacter or Eubacteria). The second type of cell is termed eukaryotic (literally “true kernel” or having a true nucleus). These cells are larger and more complex. Membrane-bound organelles “compartmentalize” parts of the cell for specific functions. These cells can carry out anaerobic respiration, but most also carry out aerobic respiration due to the greater energy yield per molecule of glucose. Eukaryotic cells are found in the domain Eukarya. Remember though, while eukaryotic cells are larger and more complex, they are not “better” than prokaryotic, just different. Today, there is more prokaryotic biomass on earth than eukaryotic biomass.

Current theory is that eukaryotic cells arose from prokaryotic ancestors. Lynn Margulis worked on this concept. Her Endosymbiotic Theory is one of the mainstays of cell biology. The Endosymbiotic Theory is an attempt to explain how a prokaryotic cell could have evolved into a eukaryotic cell. Most textbooks have a discussion on this-look in your index for “Lynn Margulis” or “endosymbiosis”. Basically, a prokaryotic heterotroph ingests a prokaryotic autotroph and does not immediately digest it (there is a lag time between ingestion and digestion, which is why you may feel uncomfortable for a short time after a large meal). During this time, the autotroph will continue to function close to normal. Food poisoning works in a similar manner- the bacteria keep producing toxins until they are destroyed by the digestive system. If the autotroph produced nutrients that leaked into the heterotrophic host, the digestive processes could have been delayed further and further, until a symbiotic relationship developed. The predator (heterotroph) is provided with nutrients, while the prey (autotroph) is provided with shelter and raw materials. There is some support for Margulis’ theory. Organelles such as chloroplasts and mitochondria are about the same size as modern day prokaryotes, have their own DNA, and are capable of dividing separately from the nucleus and rest of the cell.

Organelles and Other Cell Structures

Cells, especially eukaryotic ones, are complex structures made of smaller parts called organelles (literally – “little organ”). Most textbooks have a summary table or diagram at the end of the cell chapter covering these organelles. What follows is a brief overview of most of the major organelles and other structures found in cells as well as a brief description for each. This is not meant to be totally comprehensive (here all ribosomes treated together) or exclusive (there are a variety of different structures in the cell membrane). 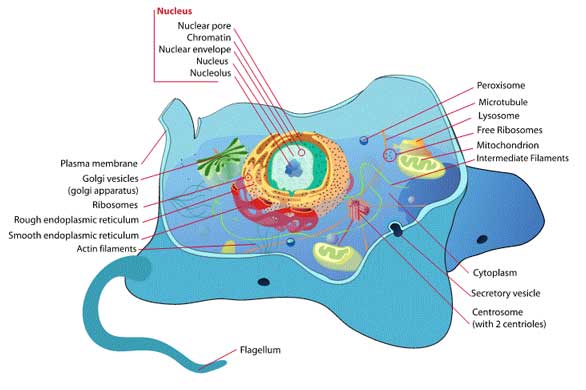 Cell Wall: Technically is not part of the living cell since it is outside the membrane. It provides rigid structural support in plant, fungi, some algae, and prokaryotic cells. The thickness and chemical composition of cell walls can vary between organisms.

Cell membrane: This is the barrier between the living part of the cell and the nonliving environment. It is a selective barrier, allowing some materials but not others to pass. Water and small particles can slip through the phospholipid bilayer while larger and more complex materials must pass through one of the protein channels embedded in the membrane. All cells have membranes.

Cytoplasm: The fluid matrix of the cell. The cytoplasm contains dissolved ions and other materials, allows for the movement of materials within the cell, and allow for movement of organelles during cyclosis. All living cells have cytoplasm.

Nucleus: The nucleus is the “control center” of the cell. The DNA is stored in the nucleus. The DNA is the set of instructions for the cell to function, not only for reproduction, but enzymes and other functions. Only eukaryotic cells have a nucleus.

Plastids: These are structures related to photosynthesis. Different pigments trigger different functions. Chloroplasts are the site of photosynthesis, chromoplasts may be photosynthetic and/or related to seed dispersal, leucoplasts store starch. All plastids begin as protoplasts before differentiation. Only autotrophs have plastids.

Mitochondrion: The powerhouse of the cell, the site of aerobic respiration. Pyruvate is broken down in the Krebs Cycle and chemiosmosis then produces ATP from ADP and phosphate in the presence of oxygen. All eukaryotic cells contain mitochondria.

Vacuole: These membranous sacs have many functions. Material can be transported within the cell, from one organelle to another organelle, Vacuoles can take materials to the membrane for expulsion, or can be formed at the membrane to bring materials into the cell. Plants and eukaryotic algae have a large central vacuole to store metabolic waste and water. Heterotrophs produce vacuoles containing digestive enzymes to break down food particles (called lysosomes). All cells can have vacuoles, but number and types can vary.

Endoplasmic reticulum: E.R. is an organelle that extends throughout the cell. It may be smooth (no ribosomes) or rough (with ribosomes) and is associated with packaging, synthesis, and transport of materials in the cell. These are found in eukaryotic cells.

Golgi Bodies: Stacks of membranes within the cell. They package materials and form vesicles for transport out of the cell. Eukaryotic cells have Golgi Bodies.

Ribosomes: Ribosomes are not organelles, but structures of the cell. They are in the cytoplasm, on rough e.r. and in the nucleus. One of the primary roles of ribosomes is the location of protein synthesis. All cells possess ribosomes.

Cytoskeleton: The cytoskeleton is made of three different structures – microtubules, microfilaments, and intermediate filaments. They are responsible for maintaining the internal shape of the cell, acting as a framework for all the other parts. The cytoskeleton also assists in the movement of organelles and materials in cyclosis and they form the spindle structure during cell division. The cytoskeleton is present in all cells.

The largest cells are nerve cells. The giant squid has nerve cells over 12 meters in length while in humans the longest nerve cell is 1.5 meters. The smallest cell is a bacterium measuring 0.1 microns. The smallest human cells are sperm cells (40 microns). The most massive cell is the ostrich egg, weighing up to 1.4 kg.