What is the Cell Cycle?

Cells grow and divide as organisms grow and develop. Cells also grow and divide to repair tissue. Some single-celled organisms reproduce asexually through a type of cell division called binary fission. The cell cycle is the life cycle of a cell, as it grows, replicates its chromosomes, separates its chromosomes and divides. The cell cycle is divided into two distinct parts: interphase and the mitotic phase or the M-phase. Interphase is the longest part of the cell cycle. The first part of Interphase involves cell growth and is called the Gap 1 Phase or the G1-Phase. The G1-Phase is followed by the Synthesis Phase, or S-Phase. During this part of Interphase, the chromosomes located in the nucleus are copied or replicated as the cell prepares to divide. The final segment of Interphase is called the Gap 2 Phase or G2-Phase. This is another period of growth for the cell. Organelles such as the mitochondria and chloroplasts are replicated during this time so that when the cell divides into two new cells, each new cell will have enough organelles.

The Mitotic Phase, or the M-Phase, is divided into two parts: mitosis and cytokinesis. Mitosis has four phases. During mitosis, the threadlike chromosomes condense and become visible using a light microscope. The chromosomes are attached to their copies at the centromere and are called sister chromatids at the beginning of mitosis.

By the end of mitosis, the sister chromatids have separated from each other and the original chromosomes and their copies form the nuclei of two new cells. It is important to note that the two cells resulting from mitotic division are genetically identical to the original cell. This means that the two new cells resulting from mitotic division have the same number of chromosomes as the original cell. We say that chromosomal number is conserved during mitosis.

The last stage of the cell cycle is cytokinesis, or the division of the cytoplasm. In animal cells the cell membrane pinches in half. In plant cells, a new cell wall begins to grow in an area called the cell plate located between the two new nuclei until they are separated into two new cells.

Summary of events in the cell cycle in their correct order: 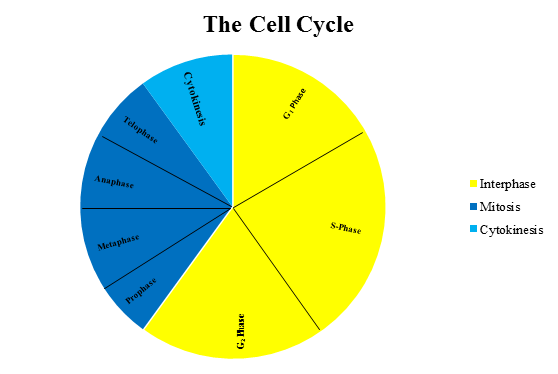 Control of the Cell Cycle

When you cut yourself, cells will be stimulated to divide until they have filled in the wound. This happens because the cells are stimulated to divide until they start bumping into each other. Proteins called cyclins and CDKs coordinate with each other and control when cells divide. Cyclins and CDKs make sure that during the cell cycle the cell is ready to proceed to the next step. One way they do this is to repair chromosomes that are copied incorrectly during the S-Phase.

Cancer cells divide out of control and have lost the ability to control the cell cycle. A tumor is a ball of quickly dividing cells that can form from a single cancerous cell. The discovery of cyclins and CDKs was an important step in trying to find a cure for cancer.

Binary Fission—Asexual reproduction in single-celled organisms that happens when a single cell divides in half resulting in two new cells that are genetically identical to the original parent cell.

Interphase—Longest part of the cell cycle. Cell grows, DNA is replicated and Organelles divide in preparation for mitosis.

Mitosis—Separation of the sister chromatids or division of the nucleus involving four distinct steps: Prophase, Metaphase, Anaphase and Telophase.

Sister Chromatids—Chromosomes attached to their copy at the centromere resulting from chromosome replication during the S-phase of interphase.

Cytokinesis—Division of the cytoplasm following mitosis caused by the cell membrane pinching inwards until the cell splits into two.

Cyclins—Chemicals that coordinate with CDKs to control the timing of the cell cycle.

CDKs—“Cyclin-dependent kinases” coordinate with cyclins to control the cell cycle.

Tumor—Mass of cells formed from a quickly dividing cancer cell.