Multiplication is a fast way of adding several of the same numbers together. For example, 3 + 3 + 3 + 3 = 12 is the same as saying 3 x 4 = 12. Once you have your multiplication tables memorized, multiplying numbers is an easy task!

Here is a times table for you to practice from. In order to use this, find the two numbers you want to multiply outside of the box (pick one from the top, and one from the left hand side). Then, look at where those two rows meet, and at that meeting point you will see the answer to the problem. For example, for multiplying 3 x 3, you would find 3 at the time, then find 3 on the left, then trace them with your fingers straight across, and down, until they meet at 9. 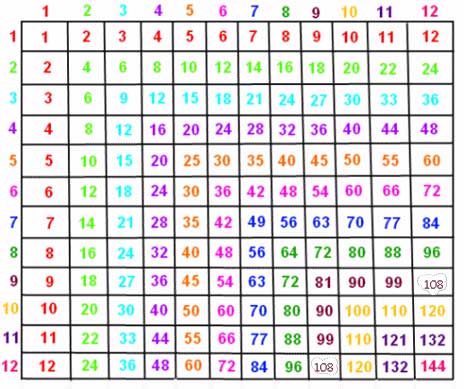 Mulitiplication with Two Digit by One Digit Numbers

After you’ve learned your times tables, you’ll be asked to multiply 2-digit numbers by 1-digit numbers. That would look something like this:

In order to complete this problem, you will break it down into three easy steps. They are:

Let’s try this one more time. Here’s the example:

Following the steps above, it would look like this:

Here’s the problem worked out:

First, this is what the problem will look like:

Now continue with multiplication by multiplying the ones digit of the bottom number (5) by the tens digit of the top number (4) and then adding the carried number (1). In this problem, you would do 5 x 4 = 20, 20 + 1 = 21. Write the 21 in front of the 4. Your answer this far should read 214, and the columns should be aligned (ones, tens, hundreds). Here’s what your problem looks like so far:

Now, the next step is very important, so watch closely. Before you move on, you need to put a zero (0) in the ones column of your answer, beneath your ones digit from the first set of multiplication. In the diagram, this is done in red:

Now, you continue with multiplication. For the next round of multiplication, you are going to be using the tens digit of the bottom number (2). First, you will multiply the tens digit of the bottom number by the ones digit of the top number. In the diagram, these numbers will be circled in red, to help you follow along. You will then split the number, like you did in the first part. The ones digit will be written in front of the 0, and the tens digit (if there is one) will be carried. In this problem, when you multiply 2 x 3, you get 6, which does not have a tens digit, so you will have nothing to carry. In the diagram, the 6 is also written in red, and is placed in front of the 0. Here’s what these steps look like:

Now, you have two rows of answers; one says 215, and the next one says 860. You are going to add those numbers together in order to get your final answer. You don’t even have to re-write them; just draw an answer bar beneath the bottom row, and put an addition sign in front of the 860. It is very important here to make sure that your columns are lined up! If you have numbers squished together, or too far apart, you won’t be able to add the numbers together. Here’s what the last step looks like:

Thus, your final answer is 1075. Congrats, you made it through!

Want one more example? Here’s the problem—see if you can work it out yourself. The solution will be shown, all at once, in the second diagram.

Ready for the answer? Here’s the solution, worked out. The two numbers you should have carried are in red. The zero that you add in to the second row of your products is also in red, like last time.

Here’s what the multiplication looks like for the ones digit of our bottom number:

Now—remember! The really important step! In the next row, we have to put a zero (0) in the ones column! Otherwise, our problem won’t line up right, and we’ll get an incorrect answer. Here’s the step showing you where to add the zero:

Here’s what the next part looks like, split up into steps. First, we multiply the tens digit of the bottom number by the ones digit of the top number, like this (multiplied numbers are circled so you can follow along):

Notice that in this step, we had to split up 10—we wrote the 0 in the answer column, but we carried the 1 onto the next number we’ll be multiplying, which is the 1.

Our last step is to multiply the tens digit of the bottom number (5) by the hundreds digit of the top number (3). Once again, these numbers are circled in red to help you follow along. The product is written in front of the 6; remember that it’s very important to keep these columns lined up for our addition problem that we’ll complete in just a few minutes.

Now, we have to put our addition sign in front of the bottom row of our products, and add those two rows together. Here’s that step:

Sign up for free to access more Math resources like . Wyzant Resources features blogs, videos, lessons, and more about Math and over 250 other subjects. Stop struggling and start learning today with thousands of free resources!
Next (Exponents) >>
MathMultiplacationMultiplying
Mark favorite