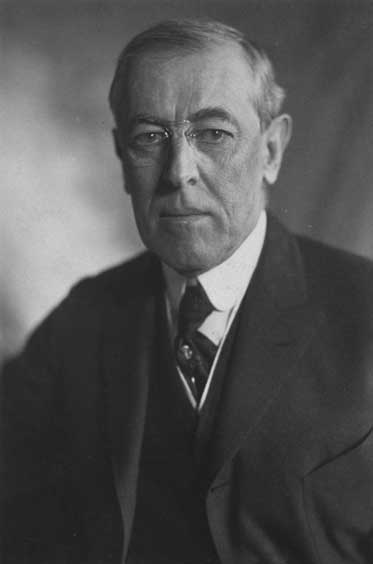 Thomas Woodrow Wilson, known to much of the American public as simply Woodrow Wilson, was born on December 28, 1856 in Staunton, Virginia. He was the third child born to Joseph Ruggles Wilson and Jessie Janet Woodrow. His mother was from Carlisle, Cumberland, England, and his father’s side of the family came from Northern Ireland. Despite the fact that Wilson’s grandfather was against slavery, Wilson’s parents identified with the confederacy and defended slavery. Wilson’s father was one of the original members of the Southern Presbyterian Church in the United States, after it broke apart from the Northern Presbyterians in 1861. Wilson lived in Augusta, Georgia, until age 14. When Reconstruction began, his family moved to Columbia, South Carolina, where his father taught at Columbia Theological Seminary.

Wilson did not learn to read until after he was ten years old. His difficulties can be attributed to dyslexia, though he taught himself many ways to compensate for his deficiencies. He attended Davidson College in 1873, but was unable to continue on for a second year, due to medical issues. When his father began teaching at Princeton University, Wilson transferred there and graduated in 1879. He actively spoke out for the Whig Party, and devised a Liberal Debating Society. Wilson then attended his first year of law school at the University of Virginia. He had to withdraw from school, due to his health, and then continued on with his studies from his home in Wilmington, North Carolina. In 1882, after he had studied on his own for several years, Wilson opened a practice in Atlanta. He passed the Georgia bar; however, there was an overwhelming amount of lawyers, so he rarely had a high enough caseload to keep him busy. In 1883, Wilson applied and was admitted to Johns Hopkins University to work towards his doctorate in history and political science. After graduating, he taught for three years at Bryn Mawr College and two years at Wesleyan College.

Wilson was afflicted with hypertension, and likely had his first stroke at age 39. However, he took after his seemingly hypochondriac mother, and oftentimes thought he was more ill than he was. Despite health issues, Wilson married Ellen Louise Axson, and together they had three daughters: Margaret, Jessie, and Eleanor. When Ellen died in 1914, Wilson dated a woman named Edith Galt, and the two were married the following year. Edith was a descendant of the Native American woman Pocahontas. Wilson’s interests included cars and baseball. He also regularly bicycled and played golf.

Wilson became a faculty member of Princeton University in 1890. He taught classes on jurisprudence and political economy. He later became the president of Princeton, after having been promoted by trustees of the school, in 1902. Wilson devised many improvements to the school, including hiring more faculty, expanding to include a graduate school and a school for electrical engineering, as well as a museum of natural history. He designed curriculum guidelines that signalled the progressive nature of these changes. He raised academic standards so that admission qualifications were much higher than they had been previously. Eventually, several of Wilson’s plans were rejected by men who wanted to keep the college more like a club for the elite than a school where anyone can come to study. This rejection encouraged Wilson to pursue a life of politics.

In 1910, after having left his position of president of Princeton University, Wilson ran for the Governor of New Jersey. Wilson was successful, even though just two years prior, Taft and the Republicans had a very strong support in New Jersey. Wilson’s success was attributed to the growing support for progressive ideas endorsed by Roosevelt, amongst others.

Presidency and World War I

In 1912, Wilson picked a running-mate, IN Governor Thomas R Marshall, and a campaign manager, NY lawyer William Frank McCombs, and ran for the United States presidency. Wilson appealed to much of the American public, especially the South, because he was progressive and sober, but didn’t advocate for a dry America. He connected best with younger intellectuals, lawyers, and the like. He spoke for “New Freedom,” which limited the federal government’s power and was opposed to the controlling nature of monopolies. Wilson emerged victorious in the election, defeating both William Howard Taft and Theodore Roosevelt.

Wilson served his first term as president from 1913 - 1917. He appointed many fellow democrats to government positions. He held the first press conference, and started the tradition of allowing reporters to ask questions. He gave the State of the Union address live, which no president had done since Thomas Jefferson, as he had stopped that practice in 1801. In 1913, Wilson got Congress to pass the Federal Reserve Act. This was a compromise between Republicans and Democrats; Democrats wanted to rid the US of private banks and Wall Street, and wanted the government to control the central bank, so that it could print money as Congress needed it. The compromise did the following: it allowed private banks to control the Federal Reserve Banks (there were 12), but it also placed controlled interest in the system through a board appointed by the president with the Senate’s approval. This also supported the idea of an “elastic” currency. He was not a “trustbuster” as Taft and Roosevelt were before him. He encouraged economic competition through the Federal Trade Commision.

Wilson spent the majority of his first presidential term trying to keep World War I in Europe. Though he offered to mediate, neither the Allies nor the Central power took him seriously enough. He did not focus his energy about building up the US army, because he believed that would encourage the spread of the war. In 1916, Wilson handily won the re-election to presidency, using the slogan “He kept us out of war.” However, in 1917, the decision to go to war was inevitable. US ships were threatened, and Wilson wanted the war in order to make the world a “safe” place for democracy. The US proceeded as an associated power, not an alliance to any particular country. He wanted the war to be “the war to end war,” and then devised the Fourteen Points, which included the proposal for a League of Nations. He gave this address on January 8, 1918, and emphasized cooperation amongst nations. He attended the Peace Conference of 1919, which aimed to grant big and small nations the same political independence. Wilson’s League of Nations idea made its way to the Treaty of Versailles, which was one of the major peace treaties at the end of WWI and ended the war between Germany and the Allies.

Other important features of Wilson’s time in office were passing the 19th amendment, which gave all women the right to vote, as well as supporting unions and developing the Child Labor Reform Act.

After serving his terms as President, Wilson and his wife, Edith, moved to a townhouse in Washington, D.C. On November 10, 1923, Wilson gave a short radio speech celebrating Armistice Day from his home. This was his last national address. He died several months later, on February 3, 1924, and was buried in the Washington National Cathedral.

Here, we have two of Wilson's most important addresses:

Sign up for free to access more History resources like . Wyzant Resources features blogs, videos, lessons, and more about History and over 250 other subjects. Stop struggling and start learning today with thousands of free resources!
Next (Fourteen Points) >>
HistoryUS HistoryBiographyWoodrow Wilson
Mark favorite