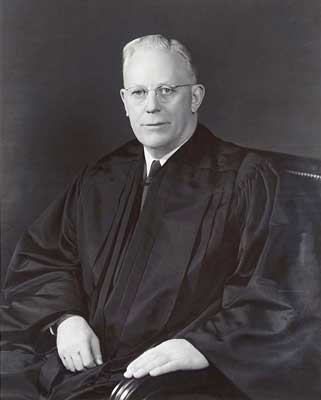 Born to a Norwegian-Swedish immigrant couple on March 19, 1891, Earl Warren spent the majority of his childhood in Bakersfield, California. Warren’s father was a repairman for the railroad, and was murdered by an unknown robber before Warren graduated high school. Warren went on to study at UC Berkeley and received his Bachelors of Arts in Legal Studies. In 1914, he was admitted to the California bar. In 1917, he joined the US Army to fight in World War I. In 1925, he married Nina Elisabeth Palmquist Meyers, a Swedish widow, and together they had six children.

In 1938, Warren was elected Attorney General of California, after running without major opposition. He ran an anti-crime campaign and tried to eliminate gambling ships in southern California. During this time, he was also largely responsible for the removal of Japanese to internment camps, claiming that the Japanese were the “Achilles heel” of the US’s defense effort during World War II.

Running on the Republican ticket in 1942, Warren was elected Governor of California. He was re-elected in 1946 and again in 1950, which made him the first and only governor of California to serve three consecutive terms. As a progressive governor, Warren was extremely concerned with planning and running the state as efficiently as possible. He began postwar economic planning before the end of WWII. Warren ran for Vice President of the US with Thomas Dewey in 1948; however, the pair lost to Democratic candidate Harry Truman and Vice Presidential running mate Alben Barkley. That was the only election Warren ever lost.

Election to the Supreme Court

Warren was the “favorite son” candidate of California in the 1952 Republican nomination for Presidential candidate. However, when Eisenhower and Nixon were elected, everyone could see that there were unresolved tensions between Nixon and Warren. To keep the peace, Eisenhower offered Warren the job of solicitor general, with a promise of an eventual Supreme Court seat. Warren accepted; however, before this was made public, Chief Justice Fred Vinson died suddenly, and Eisenhower picked Warren to replace Vinson as Chief Justice of the US. Eisenhower was impressed by Warren’s commitment to maintaining the integrity of the US political system through the courts, and felt that he would be impartial to political biases, and instead uphold justice.

Warren’s presiding over the Supreme Court eventually came to be known as the Warren Court. Initially, many Supreme Court justices, who had been appointed by FDR and were New Deal fanatics, split the vote evenly, which tied up many popular cases. However, when Arthur Goldberg was appointed to the court in 1962, Warren finally had the fifth vote he needed in order to maintain the liberal majority. He went on to make such decisions as Brown v. Board of Education (1954), which banned segregation in public schools. He also worked to get the still-used Miranda rights in place, which meant that criminals being arrested were read their rights before being incarcerated. Under Warren’s leadership, the Supreme Court also declared mandatory prayer in public schools unconstitutional. Additionally, an individual’s right to privacy was upheld in Warren’s Court.

When President John F. Kennedy was assassinated, Warren was in charge of the team leading the investigation. You can listen to Warren's Eulogy of JFK here.