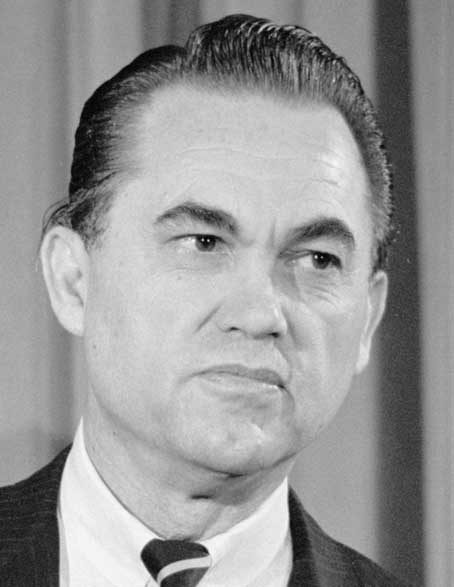 George Corley Wallace was born on August 25, 1919, in Clio, Alabama. He played football and wrestled in high school and graduated in 1937. In 1937, Wallace’s father died; later, Wallace enrolled in law school, working part time to help pay for his tuition and family’s expenses. He held various jobs; he boxed professionally, worked as a waiter as well as in a kitchen, and he also drove a taxi to make money.

Wallace served in the US Air Force for a short amount of time; he received a medical discharge and returned home to Alabama, where he served as an assistant attorney for the state. He was elected to the state legislature in 1947, where he encouraged industries to make their homes in Alabama. He also secured tuition money for GI dependents and widows of war casualties. Ultimately, his goal was to obtain governorship. The first time he ran for governor, he was defeated by John Patterson, who accepted the KKK’s support. Wallace had refused it, therefore accepting the support of the NAACP. However, this likely cost him the election.

By the primary of 1962, Wallace had realigned his views - sadly enough, they had become increasingly race-oppressive. In 1964, he entered the presidential primaries with much support. In 1965, Wallace tried to get the state legislature to allow a governor to serve more than one consecutive term; however, his opponents made sure that amendment did not pass. Instead, he chose his wife, Lurleen, to run as stand-in governor; she easily won the race.

In 1972, Wallace attempted to run for President once again. He had initial success; however, while in Maryland, he was shot by Arthur Bremer, who was trying to assassinate Wallace. Wallace survived the attack; though, he was paralyzed and could not move his extremities or control his bodily functions after the attack. Unable to continue in the race for President, Wallace returned to his governorship. After that, he won the following election for governor, meaning he was in office for two consecutive terms. While in office, he approved the largest highway expansion program in Alabama’s history. He spent a record amount of money on educational reform and improvements.

After his first loss for the seat of governor, Wallace’s stance on political issues regarding race became extremely hostile. He was in severe favor of segregation; he even stood in front of a school, disallowing the integration of black students, until the National Guard told him to stand down. Eventually, he came around and apologized for his severe support of racism. He said that it felt as though he needed to hold those extreme views in order to gain support (votes) from the population of Alabama. By the end of his career, Wallace remained on good terms with the Alabama Education Association, black political organizations, and other legal groups.