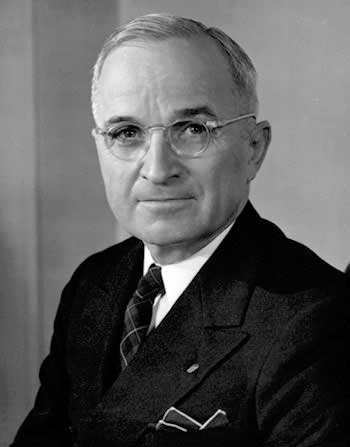 Harry Truman was born on May 8, 1884, to John Anderson Truman and Martha Ellen Young Truman in Lamar, Missouri. Truman had two siblings, and his family resided on a farm in Independence, Missouri. Truman began school when he was eight years old, and his main interests included music, history, and reading. He graduated high school in 1901 and worked several odd jobs, including clerical work as well as working for a railroad company. In 1905, he enlisted in the National Guard, and served until 1911. He proposed to sweetheart Bess Wallace in 1911, but she said no. He promised that he’d be making more money before asking her again.

Before WWI, he rejoined the national guard and was sent to a training camp in Oklahoma. Truman became an officer and later, a battery commander in France. His headed Battery D, 129th Field Artillery, 60th Brigade, 35th Infantry Division, which was known for discipline issues. Truman was able to get his men to cooperate, and they ended up not losing a single man under Truman’s command. His military career paved way for his involvement in politics upon returning to Missouri. After the War, Truman attended night classes to pursue a law degree; however, he dropped out after losing his job.

After Truman returned to Missouri, he married Bess Wallace (1919) and they had one daughter together (1924). In 1922, he was elected to the Jackson County court judge, which was actually an administrative position. Later, he was elected as presiding judge in 1926, and re-elected in 1930. He laid out the “Ten Year Plan,” which included public works projects, road construction, new buildings, and commemorative monuments. Truman participated in the 1934 election for US Senator from Missouri. He first defeated two other democratic candidates, and then, when running again the republican candidate for the official title, he won that race as well. Although Pendergast, Truman’s backer, was not able to be as present in the 1940 election, Truman defeated his opponents, winning by 8,000 votes. In the November election, Truman won by a mere 2% of the popular vote.

FDR knew that his health was deteriorating before the election in 1944. He also realized that the Vice President, Henry Wallace, was not very popular, and Roosevelt wanted to replace Wallace. Critics said that Wallace was “too far to the left.” However, many people also realized that the next Vice President would, in fact, be the next President as well, as it was not likely that FDR would survive another four years in office. Although Truman did not campaign for the role, FDR wanted him nominated for Vice President on the ballot. They won the election, and FDR died on April 12, 1945, just several months after being reinstated as President. Although he felt as though he was unprepared to assume the office of President, Truman took over upon FDR’s death. He wanted the support of FDR’s cabinet members, but told them straightaway that he would be the one making the decisions. In August, just months after assuming the presidency, Truman authorized the use of the atomic bomb on Japan. After Nagasaki and Hiroshima were both attacked, Japan agreed to surrender; Tokyo was next on the list of cities to bomb. Truman upheld the idea that, by using the atomic bombs and coercing Japan into surrendering, he was actually saving hundreds of thousands of lives on both sides.

Reelection and the strike

Little planning had been done here in the US as to what would happen when the War ended. This lack was mostly due to the fact that experts believed that, after war in Europe was over, it would take at least a year to beat Japan. However, upon the sudden termination of the War, life in the US was thrown into chaos, without plans for a smooth transition from wartime to peacetime. There was no agreement amongst Congress members as to what course the economy should take. Truman was, however, to make several significant impacts on civil rights, as he secured some things, like voting rights and fair employment policies.

In April of 1952, the United Steelworkers of America were scheduled to begin striking; however, Truman told his Secretary of Commerce to take over many of the nation’s steel mills, nationalizing them. He stated that he needed a consistent supply of steel for munitions to be used in the Korean War. In June of that same year, the Supreme Court found this to be an unconstitutional action, and argued for a separation of powers.

After Truman left the office, he had only his military pension to financially support himself and his wife. There was no benefit package at that time for former presidents. He took to writing his memoirs of being in office, and sold them for a one time payment of $670,000; however, he ended up with only $40,000 after taxes were taken out and he paid his assistants. The next year, Congress passed the Former Presidents Act, which stipulated that a former president would receive a yearly pension after his time in office.

He was eventually given an honorary Civic Law degree from Oxford University; he also got to meet Winston Churchill. He and his wife, Bess, were presented with the first two Medicare cards, which was reminiscent of his struggle for government health care while he was president. Harry Truman died on December 26, 1972, at 88 years old.