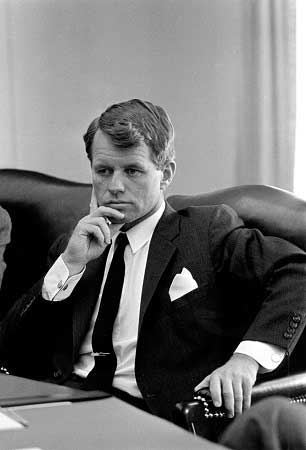 Robert Francis Kennedy, more commonly known as “Bobby” Kennedy, was the younger brother of former president John F. Kennedy. Born on November 20, 1925, he grew up in New York and attended mainly private schools in the northeastern part of the country, with the exception of the 7th grade, which he attended in London, England. In 1944, six weeks before he turned 18, Bobby enlisted as an apprentice seaman in the US Naval Reserve. He spent time training at the V-12 Navy College Training Program at Harvard in Cambridge, Massachusetts, and Bates College in Lewiston, Maine. In 1946, after he was honorably discharged from the Navy, Bobby returned to Harvard to finish school. He made the varsity football team and graduated with a degree in government in 1948. He then embarked on a six month tour of Europe, where he was able to witness firsthand the growing tensions. After his tour, he returned to the US and began law school at the University of Virginia School of Law.

He married Ethel Skakel on June 17, 1950, in Greenwich, Connecticut. He graduated from law school the following year, and a month later, their daughter, Kathleen, was born. Bobby spent that summer studying for his bar exam. In the fall of 1951, Bobby traveled with his older brother, John, and his older sister, Patricia, to Japan, Vietnam, Israel, and India for seven weeks. In addition to gaining a better perspective of the political issues, he also spent this time bonding with his siblings, of whom he had seen very little because of the age difference between the three of them.

When he returned from his trip to Asia, Bobby moved his family to a townhouse in Washington, D.C., and began working as a lawyer for the Internal Security Section, which sought out Soviet agents, or spies. This investigative team was led by Senator Joseph McCarthy. After six months, Kennedy resigned from the committee because he did not agree with the methods McCarthy was using. When he returned to the Senate subcommittee, he wrote a report condemning McCarthy’s ways of investigating suspected communists.

In 1960, Bobby managed his brother’s campaign for presidency. Once John was elected, he appointed Bobby to Attorney General. He became known for his unbiased administration of the Department of Justice. He vivaciously supported the fight against organized crime, as well as the African American civil rights movement. He advocated for an equal right to vote, attend schools that had been integrated, and use public services, such as transportation, businesses and the like. He tried to ensure safety at the University of Mississippi by sending US Marshals and troops to enforce the federal court order allowing James Meredith, a black man, to attend the university. After his registration, two people were murdered and hundreds were left injured. Kennedy wanted to see this type of racial come to a stop completely. Throughout his brother’s presidency, Bobby played a crucial role in several decisions that kept the US out of nuclear warfare, and led to the weapons removal from the Soviet Union.

After the assassination of his brother, John, Bobby continued working for the President for a short time. However, he quickly resigned and decided to campaign for the Senate. He successfully won the New York State Senate seat.

In 1967, when both Kennedy and Johnson were thinking of running for president, the main debate was the Vietnam War. While Johnson clearly supported the war, that is, he found it necessary, Kennedy and MLK, Jr., found the war to be morally wrong, especially once it came to be known that Vietnamese women and children were also victims of the war. Kennedy openly supported anti-war activist Cesar Chavez. In 1968, Kennedy announced his candidacy for presidency. Jackie Kennedy was worried about her brother in law’s safety once he announced he was running for office. She was worried that he too would also be assassinated for his political views, as her late husband was. After the death of Martin Luther King, Jr., Kennedy became even more outspoken in his campaign for civil rights. He stressed how important it was to let African Americans and other minorities attend college and have equal opportunities when it came to jobs; he criticized the white privilege extensively. At this point, his advisers warned him that he would not gain the nomination for president; however, he continued to speak out against blatant injustices. Moreover, threats to his safety and life were coming in through FBI reports.

One day, on his way to a press conference in the Colonial Room, he was escorted via a short cut through the kitchen of the Ambassador Hotel. On the way there, Sirhan Sirhan began shooting. According to an autopsy report, three bullets struck Bobby Kennedy. The fatal blow came from just inches behind his head, behind his right ear. However, police and eyewitness reports say that Sirhan was at least one and a half to two feet behind Kennedy. Despite Sirhan’s supposed “confession,” the judge would not allow the confession, and Sirhan plead not guilty in court, because the judge would not allow him to change his plea. The trial brought about many controversies, including everything from a set up to brainwashing, as Sirhan could “not remember” ever confessing to the murder. Eventually, Sirhan was sentenced to death, but three years later was re-sentenced to life in prison, being that California outlawed capital punishment.

Kennedy’s body was sent back to New York, where a mass was held at 10:00AM on June 8, just three days after the shooting in California. He was eulogized by his brother, Ted Kennedy. After the service, his body was put on a train and taken to Washington D.C., where he was buried in Arlington National Cemetery, near his brother, Jack. The dispute continues on over whether Sirhan was a lone gunman, or whether there was “more to it” than that, but for now, that’s the most that is known.