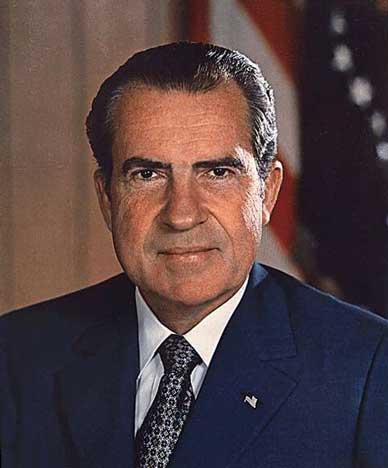 Richard Milhous Nixon was born on January 9th, 1913. His parents were Quakers, and therefore he learned at a young age to stay away from alcohol, cursing, and dancing. When their family farm failed in 1922, they moved to Whittier, California. Nixon’s father opened up a grocery store as well as a gas station. When he was twelve, Nixon was discovered to have a spot on his heart; with the family history of tuberculosis, he was forbidden from playing sports. Nixon went on to graduate high school ranked third out of his class of 207 students. Upon graduation, Nixon was offered a tuition grant for Harvard in Massachusetts; however, due to the fact that his brother was sick and his mother had less time to help the family, Nixon had to stay home and work at the family store. While doing this, he was able to attend Whittier College and obtain his degree. He was engaged in 1933 to Ola Florence Welch; however, the two split in 1935, before they were married. Nixon graduated from Whittier in 1934, and was given a full scholarship to Duke University of Law. At the time, the university was new and trying to attract students, so they gave away scholarships to very bright students; however, the scholarships were not guaranteed year after year, so students would have to compete for scholarships in their remaining years of school. Nixon not only kept his scholarship, but he also was elected President of the Duke Bar Association. He graduated ranked third in his class in June 1937.

In January, 1938, Nixon actualized a role in the play The Dark Tower. He starred opposite of Thelma “Pat” Ryan. For Nixon, this was love at first sight; however, Pat took some convincing. After several failed attempts, Nixon finally got her to go out with him. They were married in June of 1940. They honeymooned in Mexico, and later had two daughters, Tricia (1946) and Julie (1948).

Nixon joined the Navy in 1942, ranked as a lieutenant. He traveled to the Pacific as an operations officer for the South Pacific Combat Air Transport Command. Despite the fact he was never an active part of combat, he earned two service stars and a citation of commendation. He resigned on January 1, 1946.

After his presidential nomination, General Dwight D. Eisenhower selected Nixon as his vice presidential running mate. Because Nixon was young, had a strong political following in California, and had a reputation for being anti-communist, Eisenhower’s advisers saw Nixon as a natural choice for the vice presidential candidate. During the campaign, the media found out that Nixon had a fund that reimbursed him for all of his political expenses. While having this type of fund was not illegal, many accusations were made, including one that he had a “secret” fund; these types of allegations could have seriously hurt the Eisenhower-Nixon campaign. To cut short any rumors before they got out of hand, Nixon addressed the public via national television, explaining that he did have a fund, and that it had never been kept secret. This speech later became known as the “Checkers” speech, named specifically for the small cocker spaniel puppy a donor had sent Nixon, which he refused to return, because his daughter had become attached to her new pet. The public reacted well to this emotional address, and the Eisenhower-Nixon campaign was victorious at the polls that November. Nixon was a very loyal “second in command,” attending meetings when Eisenhower could not, and assuming presidential responsibilities when Eisenhower had a heart attack and was unable to perform his duties for a six week period.

In 1960, after Eisenhower had served two consecutive terms as president, Nixon was the natural choice for the Republican nomination for presidency. He was expected to win, due to his great service as vice president. However, the Democratic nominee, John F. Kennedy ran a very powerful and eventually victorious campaign, with just 100,000 more votes than candidate Nixon. Upon losing, Nixon announced that he would retire from politics altogether.

However, in 1968, Nixon decided to re-enter the political realm and won the Republican presidential nomination once again. This time, his campaign was successful, and he was inaugurated on January 20, 1969. Unfortunately, the early 70s were filled with secrets and scandals. After appointing Henry Kissinger to a position in National Security Affairs, Nixon allegedly ordered Kissinger to arrange a coup d’etat against Salvador Allende. Kissinger called off the coup one month later. However, documents prove that the CIA had continued to support a coup in Chile.

During his campaign, Nixon had promised to end the Vietnam War. However, there was no good resolution in ending the war. Pulling American troops out of Vietnam would only mean that North Vietnamese troops could remain in South Vietnam. Nixon tried to encourage Northern Vietnam to withdraw its troops. Using tactical encouragement, Nixon ordered the dropping of 100,000 bombs on Hanoi and Haiphong, two northern Vietnamese cities. The northern Vietnamese still refused to withdraw, so in January of 1973, Nixon signed the peace agreement that had been proposed the previous October.

During the presidential campaign of 1972, there was a break-in at Democratic headquarters at the Watergate in Washington, D.C. The media immediately claimed that the break-in had been planned by Nixon’s officials, in order to win the campaign. Nixon claimed to not know anything about the organized break-in, or payment of “hush-money” to the burglars involved. Raising suspicion, Nixon forced two of his main advisers, H. R. Haldeman and John Ehrlichman, to resign in April of 1973. John Dean, another adviser, refused to resign, and was instead fired, and Spiro T. Agnew, the vice president, was also forced to resign. He was replaced by Gerald Ford. John Dean testified in the hearings that Nixon had, in fact, known about Watergate and had participated in the cover-up. Dean also assured that Nixon had the missing tapes, proving his guilt. Pressured to do so, Nixon procured the tapes that Dean spoke of. Members of the Senate wanted his impeachment; however, on August 9, 1974, Nixon became the first US President to ever resign. One month later, Gerald Ford pardoned Nixon of “all offences against the United States” in which Nixon may have been involved. This pardoning kept Nixon from being tried or imprisoned due to any outcome of the scandal. However, his advisers were not so lucky, and other staff members were imprisoned.

Although Nixon had been subpoenaed to testify at his advisers’ trials, he fell ill with phlebitis, an inflammation of the veins. He was excused from testifying at the trials and instead spent his time in the hospital and at home, recovering. As his monetary assets were dwindling, Nixon began writing his memoir. He also met with British talk show host David Frost, and was paid $600,000 for several in-person interviews. In his retirement, Nixon wrote and published 10 books. On April 18, 1994, Nixon suffered a massive stroke in his New Jersey home. A blood clot had travelled to his brain, and there was severe nerve damage. He could not move his right arm or leg. He fell into a coma, and died on April 22, 1994.