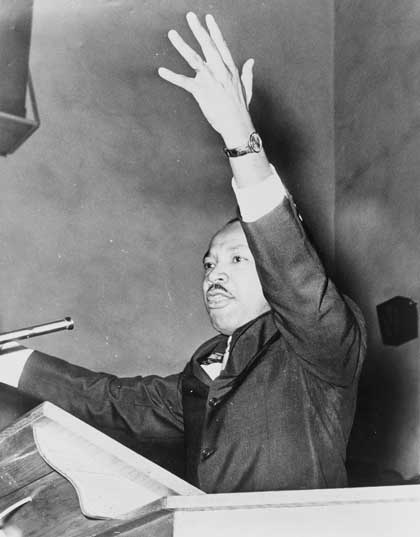 Dr. Martin Luther King, Jr., originally named Michael King, Jr., was born on January 15, 1929, in Atlanta, Georgia. His parents, Michael King, Sr and Alberta Williams King were married in 1926, and Michael, Jr was their middle child. In 1931, Michael Sr. took over as pastor of Ebenezer Baptist Church, after King’s father-in-law, A. D. Williams died in 1931. King, Jr. entered college at age 15, after skipping both his freshman and senior years of high school. During his senior year of college, King decided he would like to pursue a career in the ministry. His undergraduate degree was in Sociology from Morehouse College, and after graduation he attended Crozer Theological Seminary in Pennsylvania. During his senior year, King was mentored by Reinhold Niebbuhr, who was possibly the most influential person on King’s spiritual views. Although King had offers from Yale and Edinburgh to pursue his doctorate degree, he chose Boston University. While at Boston University, King met Coretta Scott; they were married in June of 1953 and together gave birth to four children, Yolanda, Martin Luther King III, Dexter Scott, and Bernice. By the time he turned 25, King had already obtained his PhD and started a family.

1955 marked the beginning of many major changes for Civil Rights. It began with a young girl refusing a white man her seat on the bus; the girl was later thrown into prison. Later that year, Rosa Parks was put in a similar situation. She was arrested and fined for refusing a white man her seat on the bus. That night, King met with E.D. Nixon, and together the two planned a city-wide bus boycott. The boycott lasted 382 days, during which African Americans walked to work, facing intimidation and harassment from opposers. Using the Supreme Court ruling “Separate is never equal,” African Americans were also able to take legal action against the city of Montgomery. Eventually, the law requiring separation of races on public transit was removed.

In 1959, King made a trip to India, to see Gandhi’s birthplace. King became even more inspired to pursue Civil Rights after this visit. King represented a non-violent approach and supported the student “sit-ins” in Greensboro, North Carolina. King was arrested for refusing to leave after being denied lunch service at a local department store. Despite the fact King was released, he was later charged with violating his probation due to a traffic error. President Kennedy, anticipating the pressure this may put on the 1960 campaign, made a call expressing his extreme concern for the treatment King was receiving. Soon thereafter, King was released.

In 1963, King organized a Civil Rights demonstration in Birmingham, Alabama. City police did not respect the non-violent approach, and turned hoses on and released dogs to try to “control” the protesters. King and many of his supporters were thrown in jail that day; however, the demonstration did succeed in getting national publicity. Shortly thereafter, on August 28, 1963, King and his supporters marched on towards the nation’s Capitol; it is here that King gave his famous “I have a dream” speech.

King worked diligently throughout the 1960s in order to gain equal rights among races. The protesting lifestyle, living in fear of being harassed, assaulted, or thrown in jail, was wearing him down. He made one last push at a labor strike in Memphis, TN, in 1968. The following day, he was shot by a sniper named James Earl Ray. He was caught, charged, and convicted of killing Martin Luther King, Jr. He was sentenced to 99 years in prison, and died on April 23, 1998 while serving his sentence.

At this site, you can listen to some of Dr. Martin Luther King's most important speeches and gain an insight to the Civil Rights movement.