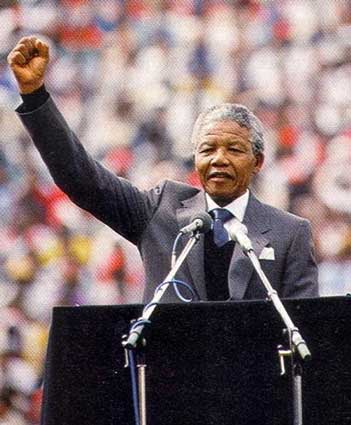 Born in Mvezo, in the district of Umtata, Africa in 1918, Nelson Rolihlahla Mandela belonged to the Thembu dynasty of South Africa. His great grandfather ruled as king of the Thembu people; however, due to certain rights pertaining to birth and lineage, none of his descendants were able to inherit the throne. However, Mandela’s family stayed involved in the political life, and his father was the chief of Mvezo. Mandela’s birth name, Rolihlahla, means “troublemaker.” Despite being mischievous, Mandela was the first of his family members to attend school. Mandela’s father died when Mandela was nine years old; Mandela became a ward of the regent, Jongintaba. He attended a mission school, was initiated at age 16, and attended a boarding institute.

Upon learning that an arranged marriage had been made for him, Mandela removed himself from his family ties to Johannesburg. Although he had trouble finding work, because he was technically run-away royalty, he eventually began working for a law firm as an article clerk. At this time, Mandela also earned his BA degree from the University of South Africa. He then began studying law at University of Witwatersrand, where he met several people with whom he would work in the future.

In 1948, the National Party, which favored racial segregation and the apartheid policy, won the election. This event inspired Mandela to take a stand in politics. He led the ANC’s Defiance Campaign in 1952 and the Congress of the People in 1955, in support of the anti-apartheid movement. Mandela was arrested for treason in 1956, along with 150 other people, but was quickly acquitted.

In 1961, Mandela took over the ANC’s armed wing, which planned sabotages in order to thwart apartheid advances. They had plans to switch to guerrilla warfare if the sabotages did not work. In 1962, Mandela was arrested and put in prison. Although many speculators have said that certain people or organizations told police where Mandela was, he still blames his imprisonment on not exercising enough caution while moving. He was originally sentenced to five years in jail. Then, members of his organization started getting arrested as well.

Mandela spent the following 27 years in prison. He spent his first 18 years on Robben Island; during these years, many started referring to him as one of the most prominent black leaders of South Africa. He and other prisoners performed daily manual labor there, and were fed little and treated poorly. In 1985, Mandela was offered freedom if he would completely denounce using violence as a political tactic. Mandela did not accept the agreement, stating that he was still a prisoner and a prisoner could not enter into a contract. He was then moved to Victor Verster Prison and kept there until his release in 1990. He gave a speech upon his release, in which he said that he was ready to make peace with white people, but that the armed struggle that existed before his imprisonment was not yet over. His main goal was to obtain the right for black people to vote in local and national elections. The following year, in 1991, Mandela was elected President of the ANC.

Nelson Mandela has had three wives. The first, Evelyn Mase, left in 1957 after 13 years of disagreeing with her husband and dealing with his absenteeism. She was a Jehovah’s Witness, and her religion required political neutrality; on the other hand, Mandela was one of the most active revolutionaries of his time. He was greatly committed to politics and did not remain neutral whatsoever. Before their split, they did have two sons (Madiba Thembekile and Makgatho Mandela) and two daughters (both named Makaziwe Mandela - the second in memory of the first, who died when she was nine months old) together.

Mandela remarried; his new wife, Winnie Madikizela-Mandela, helped him produce two more daughters, Zenani and Zindziswa Mandela-Hlongwane. They separated in 1992 and were officially divorced in 1996, after being victims of political estrangement.

In 1998, Mandela remarried a third time to a woman named Graca Machel nee Simbine. She was the widow of the former Mozambican president Samora Machel. Before the two could marry, they had to wade through many international negotiations to confirm a bride price to be paid to the Machel family. The marriage was negotiated by the same man that originally set up an arranged marriage for Mandela in 1940, from which he fled.

In 1994, South Africa held its first multi-racial election, which the ANC won. The following month, Mandela was inaugurated as the first black president of South America. During his term, Mandela focused on equalizing many aspects of social and economic issues between blacks and whites. In general, he increased spending on welfare for children, mothers, elderly, and the disabled. He also worked towards ensuring equality in the workplace, as well as updating South Africa technologically (installing and upgrading phone lines, ensuring more and better health clinics, updating educational policies, and so on).

Mandela did not run for another term as president in 1999. He did, however, continue to be an advocate for different human rights organizations. He has established or been a focus of: the Nelson Mandela foundation, the Nelson Mandela Children’s Fund, and the Mandela Rhodes Foundation.

In 2001, Mandela was diagnosed with prostate cancer. He retired from his public life (making appearances and outwardly advocating programs) in 2004, in order to keep his health up and spend more time with his family. Mandela turned 90 in 2008, and attended the FIFA World Cup game in South Africa in 2010, where he was received quite well. He still lives in his home in Johannesburg.