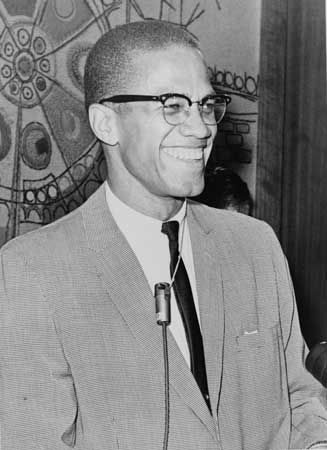 Malcolm X, born as Malcolm Little, entered the world in a hospital in Omaha, Nebraska. One of eight children, Malcolm grew up in an activist family that was often the target of white supremacists. After relocating to Lansing, Michigan, the Little family’s house was burned down by the Black Legion (a white supremacist organization) in 1929. Two years after that tragic event, Malcolm’s father was found dead on a set of trolley tracks. Malcolm was six years old when his father died. Although police ruled both of these occurrences as accidents, the Little family was positive that these tragedies were the work of the Black Legion. After the death of her husband, Malcolm’s mother suffered an emotional breakdown and her children were sent to several different foster homes.

In school, Malcolm was very bright and focused. He ranked at the top of his class. However, when he expressed his goal of becoming a lawyer to one of his teachers, the teacher stated that a career in law was “no realistic goal for a nigger.” Malcolm was so disappointed that he dropped out of school. He stayed in Boston for a bit with his half sister; there, he began to work various odd jobs. He also was introduced to crime on a small scale. He and a friend moved to Harlem, New York. By 1942, when he was just 17 years old, he was already involved in drugs, prostitution, and illegal gambling. After moving back to Boston, he was convicted of larceny, and given a 10 year prison sentence.

While he was in prison, he devoted his time to studying by reading every book the prison library contained. He also became involved in the Muslim religion through his brother, Reginald. He was paroled in 1952, after serving seven years of his prison sentence. He took the last name X, because he considered “Little” his slave name, and wanted X to represent his original, tribal name.

Nation of Islam and Civil Rights

Upon his release from prison, Malcolm X became a leader for the Nation of Islam (NOI) and worked directly with Elijah Muhammad. Malcolm X was put in charge of building new mosques in Detroit and Harlem. He became an expert at using the media (radio, newspaper, etc) to spread the NOI’s message; their membership grew from 500 in 1952 to 30,000 in 1963.

In 1958, Malcolm X married Betty Shabazz. Because of the NOI’s stance on celibacy, Malcolm and Betty were not even allowed to go on private dates before their marriage. They dated through NOI gatherings and the like, and eventually were married. Together, they had six daughters, two of whom were born after Malcolm’s death.

Malcolm X believed and preached what the Nation of Islam believed and preached: that black people were the original inhabitants of the world, and therefore superior beings. He thought that blacks and whites should be kept separate (despite all of the goals of the Civil Rights movement), and that blacks should return to Africa. He is also said to have denied the non-violent approach upheld by Civil Rights activist Martin Luther King, Jr. This comes from one of X’s most famous phrases, “by any means necessary,” which many interpreted as his condoning of violent matters. Later, while writing his autobiography, he explains a little better that he was not encouraging an unwarranted attack; however, he was advising African Americans to not allow whites to push them around or deny them certain rights, and to use “any means necessary” to get those basic human rights.

Leaving the Nation of Islam, Mecca, and a new view on Civil Rights

In 1963, Malcolm X discovered that his trusted leader and mentor, Elijah Muhammad, had been having several extramarital affairs. This act clearly contradicted the NOI’s teaching that one should remain celibate until marriage, and then be only with the person to whom one’s married. Muhammad’s affairs had also produced several children outside the confines of his marriage. Malcolm X was disgusted by this, and refused Muhammad’s requests to try to cover up his bad deeds. After X’s discovery and refusal to help cover it up, he was silenced by Muhammad for 90 days; allegedly, this was due to X’s comment on President JFK’s death. However, Malcolm X suspected that the silencing was to keep him quiet about Muhammad’s affairs.

In March of 1964, Malcolm X left the Nation of Islam because he was not able to excuse Muhammad’s actions. He created his own religious organization called the Muslim Mosque, Inc. Later that year, Malcolm X made his pilgrimage to Mecca (Saudi Arabia), which changed the way he thought about many things. For one thing, for the first time, he saw races interacting without any negative feelings towards each other. He met white men that he could “call [his] brothers.”

After Malcolm X left the NOI, they ordered his assassination. FBI informants who had infiltrated the NOI warned government officials as well as Malcolm X. After several assassination attempts, Malcolm X took bodyguards with him nearly everywhere he went. On February 14, 1965, X’s house was firebombed; however, he and his family escaped without injury.

Over 1500 people attended Malcolm X’s funeral. He was buried at the Ferncliff Cemetery in Hartsdale, New York. In the latter part of the year, Betty gave birth to twin daughters, who never had the chance to meet their father. Three assassins, Talmadge Hayer, Norman 3X Butler and Thomas 15X Johnson were arrested and convicted of murder in the first degree in 1966. Since then, they have all served their time and been paroled.

Malcolm X was regarded as one of the most influential leaders of the Civil Rights Movement. Many books and movies have been made centering on Malcolm X. In 1992, Spike Lee released “Malcolm X,” which received Oscar nominations for Best Actor (Denzel Washington) and Best Costume Design.

You can follow the link to hear Malcolm X's Ballot or the Bullet Speech.