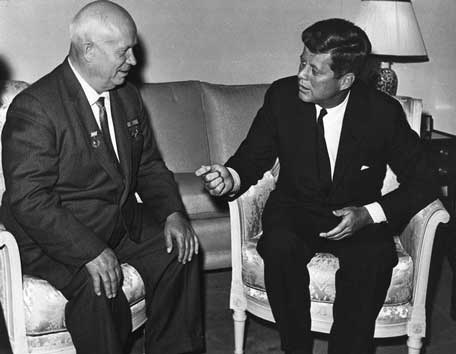 Born April 15th, 1894 in the Ukraine, Nikita Khrushchev originally worked as a pipefitter. During World War I, he took a special interest in trade unions and joined the Bolsheviks. During the Civil War, he fought with the Red Army against the Whites in the Ukraine. After the war, he returned to school and finished his education.

Khrushchev remained an active member of the Communist party. In 1925, he became the party secretary. He was invited to the 14th Party Congress in Moscow; then, he climbed the party ladder of hierarchy. In 1938, he became secretary to the Ukrainian Communist Party, where he worked under Joseph Stalin. The next year, he became a full member of the Politburo.

Feelings towards Stalin and Beria

Khrushchev initially liked Stalin; however, he sensed that he would have to be careful around Stalin so as not to say anything that Stalin could use against him at a later date. Khrushchev’s initial feelings toward Beria were positive--they got along well. However, Khrushchev was later able to see how politically hypocritical Beria was.

During World War II, Khrushchev arranged the evacuation of the Soviet Union’s industry upon the invasion led by the Germans. He also helped arranged much of the guerilla warfare in the Ukraine against the Germans. After the war, it was his job to rebuild the region that had been nearly destroyed by war. Hindered by a famine, Khrushchev’s efforts were seemingly futile; this angered Stalin, who thought Khrushchev was spending too much effort on “feeding the people.”

After Stalin’s death in 1953, Khrushchev regained much of the power he had previously lost. In September of that year, he became first secretary of the Communist Party. He executed Beria, and removed Gregory Malenkov from power to take his place in 1958. He also made several outright attacks on Stalin’s rule, calling it “despotism” and anyone who agreed with Stalin one of his “victims.” Once Khrushchev had ousted Malenkov, he began to emphasize production of consumer goods far more than heavy industry. Despite the fact that Khrushchev was de-Stalinizing Eastern Europe, he did not entirely want to give them any more independence from the Soviet Union. In fact, Khrushchev took down Imre Nagy for encouraging political discussions and reforms. Instead, Khrushchev replaced Imre Nagy with a Soviet enthusiast, Janos Kadar.

In relation to the Cuban Missile Crisis

Khrushchev expanded the Soviet Union’s space program significantly. While under his premiership, the Soviet Union launched Sputnik, the first satellite, as well as the first dog, man, and woman to travel to space. Despite success in space travel, Khrushchev eventually felt that the Soviet Union was falling behind in the arms race. In 1962, he tried to place missiles on Cuba. The US found out about the installation of these missiles, and the world looked on as the crisis unfolded. Khrushchev believed that Kennedy would not invade Cuba in order to disarm the missiles; however, as time passed, Khrushchev’s reassurance faded even more quickly. Upon finally reaching an agreement, the Soviet Union removed their missiles from Cuba; in exchange, the US removed their arms from Italy and Turkey, and publicly promised not to invade Cuba.

You can follow the link to hear Khrushchev's remarks on JFK.

Next (Remarks on JFK) >>
Mark favorite