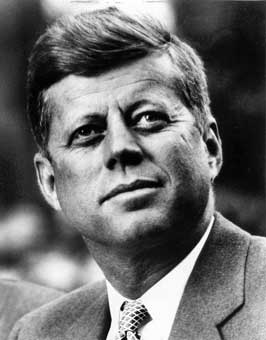 Born on May 29, 1917, John Fitzgerald Kennedy was the second of nine children born to Rose Fitzgerald and Joseph Kennedy, Sr. Never a very healthy baby, John (called Jack by his family) suffered from chicken pox, measles, whooping cough, and other childhood diseases. His family was in a constant state of worry that something would happen and they would lose their son. Growing up, Jack lived a very comfortable life due to the success of his father and grandparents as politicians. Joseph Kennedy Sr. encouraged his children, especially the boys, to compete with each other in games and sports.

As he grew up, Jack attended Choate boarding school. Upon graduation, he studied briefly at Princeton, then at Harvard and played football there as well, until he injured his back and was unable to continue playing. During his college career, his immediate family moved to London, where his father was the US Ambassador to England. Jack visited his father several times in England, and became increasingly interested in world politics. He wrote his senior thesis on Great Britain's lack of preparedness for the war with Germany.

Entrance into the political world

After graduating college, Jack and his older brother, Joe, both joined the Navy. Jack became a commander of the PT-109, a patrol torpedo boat, in the South Pacific. While he was able to survive a Japanese attack on his ship, his brother was not nearly as lucky, as he died in a plane explosion in Europe the following year. After the war, JFK returned home and was awarded the Navy and Marine Corps Medal for courage and leadership. He decided to run for Congress in Massachusetts, and was elected in 1946. After serving three successful terms, he was elected to the US Senate in 1952.

On the road to presidency

When he was 36 years old, shortly after being elected senator, JFK married Jacqueline Bouvier, 24. He then discovered he needed two serious operations on his back. While recuperating, he wrote a book about a few US senators that later won a Pulitzer prize. His first child, Caroline, was born in 1957. In 1956, after missing the nomination to run for Vice President by a very close amount, JFK made it a point to run the following election for President of the United States. Once nominated by the Democratic party, he chose Lyndon B Johnson to be his running mate. The pair beat Vice President Richard Nixon in a very close competition. At the young age of 43, Kennedy was the youngest person elected President, as well as the first Catholic. JFK and his wife had their second child, John, shortly before JFK's inauguration.

Ask not what your country can do for you...

From the second he took office, JFK took the nation by storm. His captivating inauguration speech, which claimed one should “ask not what your country can do for you, ask what you can do for your country,” resonated in the hearts and minds of many Americans. Despite his apparent confidence, the new President had many worries. He understood that nuclear war between the US and the Soviet Union was very possible; if it were to occur, millions would lose their lives. He walked a tedious line throughout the entire situation, coming close to war in 1962 over the Cuban Missile Crisis. He also had to sort through many issues dealing with racial discrimination. In 1954, the Supreme Court stated that black and white children should attend school together. However, many schools fought against this severely, as did restaurants, places of retail, public transit, and the like. JFK proposed a new Civil Rights bill when the previous one was being ignored, and he even went on TV to appeal to Americans to end racism in our country.

A life taken too soon

Unfortunately all of the good efforts President Kennedy put forth were abruptly ended on November 21, 1963. While in Texas giving a speech, Kennedy was shot by Lee Harvey Oswald. Several days later, before police had a chance to extract adequate information from Oswald, a man named Jack Ruby shot and killed Oswald. Although many aspects of his death remain a mystery, JFK left a significant impact on the nation. His strong beliefs in civil rights, the Peace Corps, his encouragement to move away from the death penalty, and so on would live out long lives in the hearts of many Americans.

At this site, you can listen to some of President John F. Kennedy's most important speeches and peer into the Oval Office through secretly recorded conversations made by Kennedy during his presidency.