The first presidential inauguration took place in 1789, in New York City, where George Washington was proclaimed first President of the United States. The 20th amendment to the Constitution states that the President will be inaugurated on the 20th of January. Before that amendment took effect, inaugurations occurred on March 4. Traditionally, the Chief Justice of the Supreme Court gives the President the Inaugural oath. The President uses a Bible, typically open to a meaningful verse, to take the oath. Currently, the Inauguration ceremony is held on the Capitol’s West Front in Washington DC. With the inauguration comes the opportunity for the President to pay respects to America’s history and speak of a plan for the future with hope for success.

Here, we’re presenting a brief overview of inaugural speeches of the last 80 years; we’ve analyzed the speeches of Presidents Obama, Bush, Clinton, Reagan, Carter, Nixon, Kennedy, Eisenhower, Truman, and Franklin D Roosevelt, as well as the state of the nation during the period of time each of those men took office. 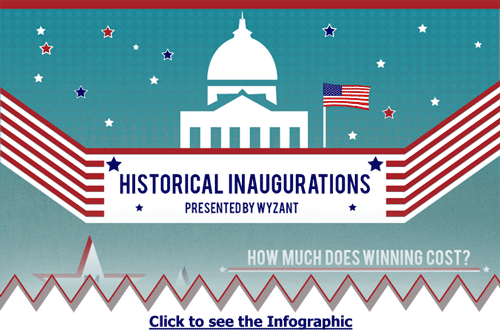 Sign up for free to access more History resources like . Wyzant Resources features blogs, videos, lessons, and more about History and over 250 other subjects. Stop struggling and start learning today with thousands of free resources!
<< Prev (Declaration of Independence)
Next (Woodrow Wilson) >>
HistoryUS GovernmentInaugurationInfographic
Mark favorite