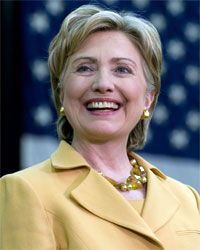 Hillary Rodham Clinton was born on October 26, 1947, at Edgewater Hospital in Chicago, IL. She grew up in Park Ridge, a northwestern suburb of Chicago. Growing up, she was active in Republican groups and campaigned for Barry Goldwater in 1964. After hearing Dr. Martin Luther King, Jr. speak in Chicago, she was inspired to lead a life of public works. She officially became a Democrat in 1968. Hillary Rodham attended Wellesley College, and was active in school politics. She was elected class president when she was a senior. After graduation, she went on to study at Yale Law School, where she met fellow classmate Bill Clinton. She graduated from Yale Law in 1973, and spent an additional year studying children and medicine at Yale Child Study Center.

In 1974, Hillary became a member of the presidential impeachment inquiry staff, and was an advisor to the Judiciary Committee during the Watergate scandal. After Nixon’s resignation, she took a job teaching at the University of Arkansas Law School, where her classmate and boyfriend, Bill Clinton, was teaching too. They married the following year, and welcomed their daughter, Chelsea Victoria, into the world on February 27, 1980. In Arkansas, Hillary was chair of the Educational Standards Committee, and co-founded the Arkansas Advocates for Children and Families. She was named one of the 100 most powerful lawyers in America in 1988 and 1991.

Bill Clinton was elected President of the United States in 1992, making Hillary the First Lady of the United States. She’s considered one of the most empowered first ladies of the US, the first being Eleanor Roosevelt. She played an active role in her husband’s presidency, giving opinions and advice on matters at hand. In 1998, an investigation determined that President Clinton had an extramarital affair with White House intern Monica Lewinsky. At first, Hillary proclaimed that these investigative results were due to a conspiracy; however, as it became more apparent that the affair did occur, she decided to support her husband on a public level. Privately, she was very upset and considered leaving the marriage altogether. After she publicly announced that she was staying with her husband, her approval ratings skyrocketed; however, some thought she was staying with him just to gain public appeal. Others thought she was enabling her husband’s improper actions by staying with him instead of “teaching him a lesson.”

When sitting US Senator Daniel Patrick Moynihan announced in November of 1998 that he’d be retiring, several significant democratic figures turned to Hillary Clinton and encouraged her to run for Senator in 2000. She bought a home in New York in 1999 to obtain residency. She thought she would be running against Rudy Giuliani, New York City’s Mayor; however, he had recently been diagnosed with prostate cancer, and wanted a break from the public life. Hillary promised to open up more jobs for citizens of New York and to encourage business investment; she also wanted to cut taxes for college tuition and long-term care. She won the election on November 7, 2000, with 55% of the votes. As Senator, Hillary was on five committees: Committee on Budget, Committee on Armed Services, Committee on Environment and Public Works, Committee on Health, Education, Labor, and Pensions, and Special Committee on Aging.

Campaign for the Presidency

In 2007, Hillary Clinton announced that she would be on the ticket during the Democratic Primaries. She would be up against Senator Barack Obama. The two gained a near-equal amount of support during the campaign; however, in the end, it was clear that Senator Obama had managed to come out in the lead. Respectfully, Senator Clinton conceded her nomination and gave her support to Senator Obama.

After President Obama won the election, he asked Hillary to be his Secretary of State. She agreed, and on December 1, he announced her nomination. The Senate Foreign Relations Committee voted 16-1 to confirm her senatorship. In January 2009, she was confirmed by a the entire Senate in a 94-2 vote. She accepted the position of Secretary of State and resigned from the Senate all in the same day. As Secretary of State, she has made many efforts to reform and change international policies for the better. She’s also an active supporter of women’s rights movements, often claiming that “women’s rights are human rights.” Despite her successes, she did state in March 2011 that she had no interest in another term as Secretary of State, if/when President Obama was reelected in 2012.