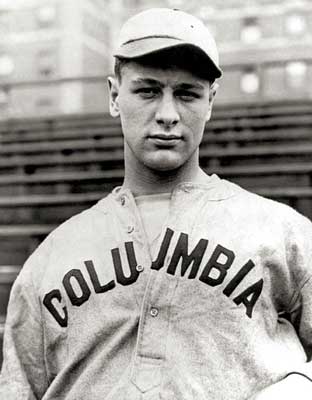 Henry Louis (“Lou”) Gehrig was born on June 19, 1903, to Heinrich and Christina Gehrig. Son of German immigrants living in Manhattan’s East Harlem, Gehrig was the only one of four children to survive childhood. Gehrig’s mother supported the family financially, as Gehrig’s father was often sick and unable to work.

Education and entrance into baseball

When Gehrig was 17 years old and playing baseball for the New York School of Commerce, he played a game in Cubs Park (Wrigley Field) and gained unprecedented attention, as he appeared before 10,000 baseball fans. He graduated high school the following year, and went on to study at Columbia University. When he started college, he was advised by the football coach to play baseball under a false name in order to get in shape for football. He was discovered; because this action was illegal, he was banned from playing sports during his freshman year of college. During his sophomore year, after he was allowed to play sports again, he played as a fullback on Columbia’s football team. He also pitched and played first base for the Columbia Nine. In 1923, Gehrig was signed to the Yankees with a $1500 bonus. He had to leave Columbia without graduating; however, he hit a .304 while playing for the minors, and was called up to the major league. He hit a .423 the following season.

By 1927, Lou Gehrig and Babe Ruth were the two most dominant baseball players in America. That same year, Ruth his 60 home runs, while Gehrig racked up 47 - second only to Ruth’s record. Together, they helped the Yankees sweep the Pirates in the World Series. Gehrig won the MVP award, and continued to dominate in 1928. As Ruth’s ability to maintain such an active presence in baseball declined, Gehrig gradually took his place. He continued to set records such as a lifetime batting average of .340, as well as highest single season number of RBIs (184 in 1931). If Gehrig became the “new Ruth,” then DiMaggio became the “new Gehrig.” Together, they led the Yankees to one of the most successful runs yet: four seasons of four World Series titles, we as well as only three games lost out of 19.

In 1938, it became clear that something wasn’t right, as Gehrig’s average fell below .300 for the first time in over 10 years; he lacked strength. Teammates and coaches all noticed that Gehrig had a serious problem; however, they waited for him to bring it up. Doctors misdiagnosed him and put him on a bland, light diet to treat a gallbladder issue, which only made the strength issue worse. Finally, after the first eight games of 1939, Gehrig took himself out of the game. On May 2, 1939, he gave the umpires the lineup card that did not include his name; the announcers grimly stated that “Lou Gehrig’s consecutive streak of 2130 games played has ended.”

After this rude realization, Gehrig headed up to Mayo Clinic, where he was diagnosed with amyotrophic lateral sclerosis (ALS), which later became known as Lou Gehrig’s Disease. The disease is degenerative and debilitating, as it attacks the nerve cells in the brain and spinal cord. Eventually, the affected person cannot breathe on his or her own; death is implicit.

After being diagnosed with this horrible disease, Gehrig knew that he would never return to baseball. He was 36 years old at the time. Although Gehrig’s wife, Eleanor, asked Mayo Clinic to keep the extensive details of Gehrig’s illness from him, he still knew he was slowly dying. On June 21, 1939, the Yankees officially announced Gehrig’s retirement, and July 4 was named “Lou Gehrig Appreciation Day” at Yankee Stadium. The Yankees also retired his uniform number (4); Gehrig was the first athlete in MLB to be given that honor.

On July 4, Gehrig addressed the crowd, giving his farewell speech. He detailed why he was the “luckiest man alive.” He expressed great humility in detailing the gratitude he felt at being able to spend a significant amount of time playing ball with such talented people. He closed by saying that although he may have “been given a bad break,” that he still had “an awful lot to live for.” He was not terribly upset about his circumstance, and sincerely hoped for the best.

About six months before he died, Gehrig accepted a ten year term as a NYC Parole Commissioner. He had turned down other offers (public speaking and guest appearances), but took the position of parole commissioner because he believed it to be a public service. Gehrig died on June 2, 1941 at his home in the Bronx. New York flags, as well as flags at ballparks nationwide, were flown at half-staff in honor of Gehrig’s life.

You can follow the link to hear Lou Gehrig's farewell to baseball.

Sign up for free to access more baseball resources like . Wyzant Resources features blogs, videos, lessons, and more about baseball and over 250 other subjects. Stop struggling and start learning today with thousands of free resources!
Next (Farewell to Baseball) >>
BaseballUS HistoryBiography
Mark favorite