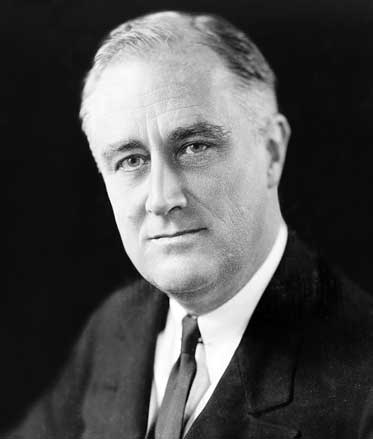 Before being elected 32nd president of the United States in 1932, Franklin Delano Roosevelt was serving his second term as governor of the state of New York. Because America found itself in the middle of the Great Depression, Roosevelt's primary goal was to restore a respectful sense of spirit in the people. He tried to encourage them by hosting talks via the radio, as well as calling a bank holiday very soon after his inauguration. FDR is likely most known for his plan to restore the economy; he called this plan the New Deal. The New Deal aimed to restore many aspects of business and agriculture. The first part was primarily focused on industry, which promoted economic recovery. The second part was focused on the promotion of labor unions, Social Security, and better working conditions in general.

Despite the criticism he received during his first term, FDR was reelected in 1936. He was the only president to serve four terms—this occurred before the 22nd amendment to the Constitution was enacted, which stated that presidents could only serve two consecutive terms. Roosevelt also guided the nation through the Nazi threats of World War II. His original approach transformed the Monroe Doctrine into a policy of mutual action against aggressors. Without placing a direct attack, he pushed aid toward European allies of the US. After the attack on Pearl Harbor on December 7, 1941, Roosevelt entered the US into the World War. He realized that many post-war actions were dependent on the United States' relationship with the Soviet Union, so he focused on forming a “United Nations” in order to establish cooperation between many different countries.

When President Roosevelt returned to the US, he spoke to Congress about the results of the Yalta conference. Many commented on how old and frail he looked; his health conditions, combined with the additional stress of the impending end of the war and peace talks, took a serious toll on his body. On April 12, 1945, he experienced a severe pain in the back of his head, which was later diagnosed as a cerebral hemorrhage, or stroke. When WWII officially ended on May 8, Truman dedicated the celebrations to Roosevelt's memory. Americans across the nation flew the flag at half-staff for 30 days, as is respectful to do in honor of the dead.

Be sure to listen to President Franklin Delano Roosevelt's following speeches:

Sign up for free to access more History resources like . Wyzant Resources features blogs, videos, lessons, and more about History and over 250 other subjects. Stop struggling and start learning today with thousands of free resources!
Next (Fala Speech) >>
HistoryUS HistoryUS GovernmentBiographyFDR
Mark favorite