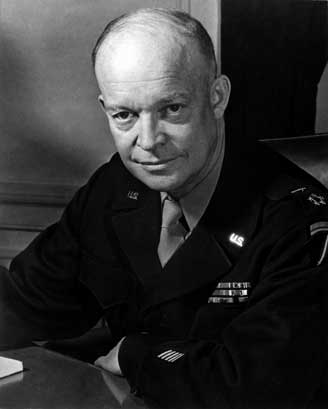 Dwight D Eisenhower was born on October 14, 1890, in Denison, TX. Before he was two years old, his family moved back to Abilene, Kansas, where they had resided before Dwight was born. When Dwight was six years old, his three year old brother, Paul, died of diphtheria. Even though his family did not have an easy time making a living, Dwight managed to grow up and have very happy memories of living in Abilene. Dwight graduated high school in 1909 and worked in a creamery with his father. He was also a firefighter at night. Dwight helped pay for his younger brother’s tuition at the University of Michigan. However, before Dwight could attend college himself, he was offered a place at West Point, the United States Military Academy, in New York. At the time, West Point was free to attend.

Upon his graduation from West Point, Eisenhower was stationed in Texas. There, he began dating Mamie Doud; the couple married the following July, 1916. On his wedding day, Eisenhower was promoted to first lieutenant. Once married, Eisenhower and his wife moved around the country, as it was necessary. In 1917, Mamie and Dwight’s first son, Doud Dwight, was born. Three short years later, Doud died of scarlet fever. During this time, Eisenhower was moved to Texas, Georgia, Maryland, Pennsylvania, and New Jersey by his demanding military career. He trained soldiers being shipped out during World War I, and longed for his own chance to be deployed to France. In 1924, Eisenhower applied for graduate school at the Command and General Staff School at Fort Leavenworth. From 1927 to 1929, Eisenhower worked under General John Pershing, touring and reporting. He was then appointed chief military aide, and served as an advisor to the Philippines. In 1942, he became the commander-in-chief of the Allied Forces. He led Operation Torch, which was the Allied invasion of North Africa.

In 1951, Eisenhower ran for president on the Democratic platform. His campaign slogan was short and sweet: “I like Ike.” He was elected on November 4, 1952, as the 34th President of the United States of America. He was elected to a second term four years later. Eisenhower’s focus, while in office, was “peace and prosperity.” Eisenhower ended the war in Korea, and kept the United States out of as many Cold War conflicts as possible. On the home front, he signed Civil Rights acts of 1957 and 1960. He also worked to overcome Senator Joseph McCarthy, who was accusing American citizens of being communists, spies, and the like. Under Eisenhower, the economy stabilized and unemployment stayed at a low rate. He increased minimum wage for employees, and he created the Department of Health, Education and Welfare (HEW).

As President, Eisenhower also had to deal with the onset of the Cold War and the secret-keeping involving nuclear weapons. He proposed that nuclear weapons be kept and used in positive ways by those who already have them; however, he did not advocate for the construction of further nucleaer weapons. He wanted to make the most of what had already been created, and stop any other countries from the possibility of having a massive weapon with which they could attack the United States. He gave the famous speech "Atoms for Peace" and proposed that all nuclear weapons be used for the good development of technology instead of the malificent act of hurting other countries.

In his farewell speech, Eisenhower warned the nation that, if left unchecked, the government could easily become a “military-industrial complex.” Eisenhower and his wife, Mamie, retired to the Gettysburg Farm, where they spent their time gardening and raising livestock. After more than twenty years of a high stress career, Eisenhower’s health was on the decline. Eventually, Eisenhower’s health declined to the point where he spent the last year of his life at the Walter Reed Army Hospital. Funerals were held for him both in Washington, DC as well as Abilene, KS.

Next (Atoms for Peace) >>
Mark favorite