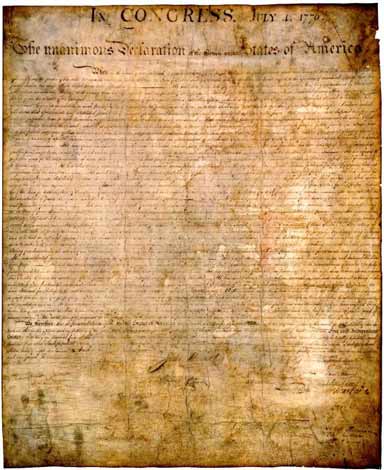 Why the Declaration of Independence was written

The beginnings of the Declaration date back much further than 1776. In May of 1775, the Second Continental Congress met in Philadelphia. The list of grievances sent to King George III by the First Continental Congress had not yet been answered. Throughout the summer of 1775, the Second Continental Congress worked to set up an army, a postal service, and new currency to be used in the colonies. By August, King George was aware that “his” colonies were in rebellion, and he began to sign acts into effect, beginning with the American Prohibitory Act, which said that all American sea vessels were property of England. In January of 1776, Thomas Paine released a pamphlet called “Common Sense,” detailing a coherent argument for independence from Great Britain. Many colonists were still divided or undecided on the issue of independence from Britain; historians now say this was likely the tipping point that convinced the majority that independence was inevitable. In April of that year, ports were opened so the colonies could trade with countries other than Britain. However, one month later, Germany formed a pact with Britain saying that they would help take down any rebellious colonists. On May 15, the delegates of Congress were instructed to draw a proposal saying the colonies were free and independent states. On June 7, Richard Henry Lee put forth the Lee Resolution, basically stating that the colonies are and ought to be free from allegiance to Great Britain.

Acceptance amongst the States

Four days later, Congress chose a committee of five men, John Adams, Benjamin Franklin, Thomas Jefferson, Robert R. Livingston, and Roger Sherman, to draft a final statement of the colonies’ independence. The five men wrote what we now know as the Declaration of Independence, which was officially adopted in the afternoon of July 4, 1776. The Declaration stated that the thirteen colonies of America no longer regarded themselves as part of the British nation, and therefore were no longer ruled by the British government. By July 9, all 13 colonies had approved of the Declaration. Once the Declaration was engrossed (written legibly on a large piece of paper), delegates from every colony had to sign in agreement. The President of the Congress, John Hancock, was the first to sign his name on the document. Others followed by signing in geographical relation to which colony they represented. Eventually, nearly every delegate signed the Declaration, save two, one of whom thought reconciling with Great Britain was best, and one who thought the Declaration was not prudent and should be reconsidered before taking such a big leap.

Structure of the Declaration of Independence

The Declaration is composed of five sections. The first is the preamble, and it explains the context under which the Declaration is being written. The second states the rights of men that the government has to secure, and it states that when the government does not uphold these rights, it should be overthrown and rebuilt into a government that functions for the betterment of all. The third section was composed of a list of grievances against England, and King George’s rule specifically. The fourth section addressed the fact that the colonies had tried to reach out to Great Britain before with complaints, and those complaints went unanswered. The fifth and final section declared that the colonies were and ought to be free states. It also specifically stated that any and all political ties to Great Britain were and ought to be dissolved.

The Declaration had five inherent propositions. First, that all men are created equal. Second, that all men are given “unalienable” rights from their creator. Third, that included in those rights are life, liberty, and the pursuit of happiness. Fourth, that governments are created in order to ensure that every man possesses these rights. And fifth, that when the form of government begins to destroy these rights instead of protect them, the people have the right to change or overthrow said government.

When are Famous Words Original? The Declaration of Independence

How much of the Declaration of Independence was original and how much was borrowed? Most students have been taught that Thomas Jefferson was the single source of the famous declaration, taking only minimal counsel from members of the drafting committee charged with articulating a statement of reasons in support of independence.

When in the course of human events, it becomes necessary for one people to dissolve the political bands which have connected them with another, and to assume, among the powers of the earth the separate and equal station to which the Laws of Nature and of Nature's God entitle them, a decent respect to the opinions of mankind requires that they should declare the causes which impel them to the separation.

We hold these truths to be self-evident, that all men are created equal, that they are endowed by their Creator with certain unalienable rights, that among these are life, liberty, and the pursuit of happiness. That to secure these rights, governments are instituted among men, deriving their just powers from the consent of the governed. That whenever any form of government becomes destructive of these ends, it is the right of the people to alter or to abolish it, and to institute new government, laying its foundation on such principles, and organizing its power in such form, as to them shall seem most likely to effect their safety and happiness. Prudence, indeed, will dictate that governments long established should not be changed for light and transient causes; and accordingly all experience hath shown, that mankind are more disposed to suffer, while evils are sufferable, than to right themselves by abolishing the forms to which they are accustomed. But when a long train of abuses and usurpations, pursuing invariably the same object evinces a design to reduce them under absolute despotism, it is their right, it is their duty, to throw off such government, and to provide new guards for their future security. Such has been the patient sufferance of these Colonies; and such is now the necessity which constrains them to alter their former systems of government. The history of the present King of Great Britain is a history of repeated injuries and usurpations, all having in direct object the establishment of an absolute tyranny over these States. To prove this, let facts be submitted to a candid world.

Contrast this second paragraph with the introduction to George Mason's draft Declaration of Rights.

1. That all men are born equally free and independent, and have certain inherent natural rights, of which they cannot, by any compact, deprive or divest their posterity; among which are the enjoyment of life and liberty, with the means of acquiring and possessing property, and pursuing and obtaining happiness and safety.

2. That all power is vested in, and consequently derived from the people; that magistrates are their trustees and servants, and at all times amenable to them.

3. That government is, or ought to be instituted for the common benefit, protection and security of the people, nation or community. Of all the various modes and forms of government, that is best, which is capable of producing the greatest degree of happiness and safety, and is most effectually secured against the danger of maladministration; and that, whenever any government shall be found inadequate or contrary to these purposes, a majority of the community hath an indubitable, unalienable and indefeasible right to reform, alter, or abolish it, in such manner as shall be judged most conducive ot the public weal.

This draft appeared in the Philadelphia Gazette on June 12, 1776, the same day that the Continental Congress appointed Jefferson and four others to draft reasons for independence.

Sign up for free to access more History resources like . Wyzant Resources features blogs, videos, lessons, and more about History and over 250 other subjects. Stop struggling and start learning today with thousands of free resources!
Next (History of Inaugurations) >>
HistoryUS GovernmentDeclaration Of Independence
Mark favorite